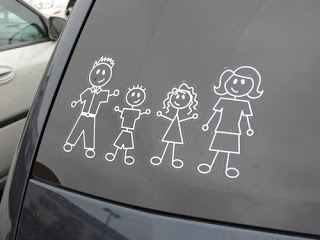 It's the thing to do here in New Jersey to show the composition of your family via stickers on the back window of your car. Are these stickers as popular elsewhere? 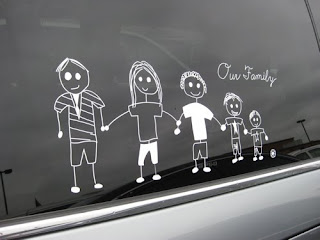 Sometimes there are just a few kids, and sometimes whole armies of them. I once saw a car with at least eight kids marching across the back window. I so wish I'd gotten a photo. Sometimes the cats and dogs are shown, too.

Sometimes the stickers include outfits that show everyone's hobbies and athletic pursuits. Invariably the boys are football players and the girls are cheerleaders. 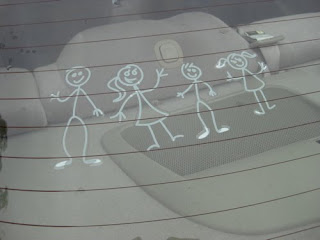 There's something very Republican about this whole phenomenon, it seems to me. (It's interesting how "family" is a word that's turned sour in my mouth because of the right-wingers who have used it to bludgeon the rights and freedoms of the rest of us.) There's also a sort of one-upmanship, like, "Look how many children I have! Look how fertile I am!"

I told Dave we should get some stickers of our own - two men and two dogs! But he firmly vetoed that idea.
Posted by Steve Reed at 11:50 AM