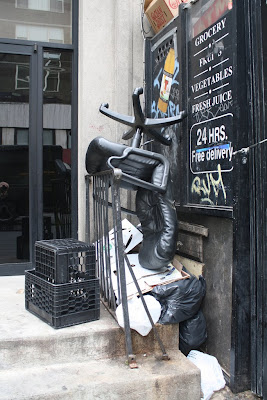 Dave and I have been using Craigslist to sell our furniture, and it's been quite an experience. Listing something on Craigslist is easy enough, but I wasn't prepared for the bizarre scammery that goes along with using the site.

For example, I make it clear in all our ads that we want local buyers and cash only. Early on, I had one potential buyer contact me and say that he wanted an item, but was overseas at the time and would have his assistant send us a money order. I initially said yes, thinking that a money order would probably be OK and I could hold the item until it cleared. But then he gave me a song-and-dance about his assistant mistakenly sending too much, and would I wire back the difference? I was like, "Dude, you have GOT to be kidding."

Needless to say, no money order ever came, and I even more adamantly insist on cash.

Lots of people send cryptic notes saying things like "Still available?" immediately after an ad is posted. I initially replied to these inquiries, resisting the urge to say, "Well, I just posted the ad two hours ago, so yeah, it's still available." Then I realized they aren't interested in the item at all -- they just want my e-mail address, which Craigslist cloaks until I respond to a potential buyer. Apparently these addresses are sold to marketers. Seems like a tedious way to make a buck, but I suppose it's no worse than working at McDonald's.

Finally, I've had a ton of replies from people who send strangely worded sentences and a fake phone number. Here are two actual examples:

I'm not quite sure what's up with these. My guess is they're fishing for my e-mail address, expecting me to write back saying "Hey, your number doesn't work." Even better if I call them and they somehow capture my phone number and pair it with my e-mail address. I don't write back, though, and I certainly don't call.

So, what a strange world Craigslist is! The good news, though, is that we have successfully sold several pieces of furniture. Once you've used the site a short time, it becomes pretty obvious who's scamming and who's sincere.