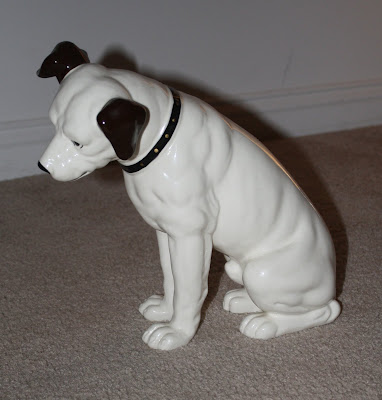 For several years, Dave has owned this figure of Nipper, the famous RCA dog who hears "His Master's Voice" as he peers into a Victrola. It's ceramic, about a foot high, and it occupied a shelf on our hall table. (Victrola not included.)

Dave isn't entirely sure where he got it, and it's not an item of great significance to him, so when we began selling our stuff to prepare for our move, Nipper was marked to go. I put an ad for him on Craigslist.

I promptly heard from a guy who lives down south -- I believe in Florida. He wanted to buy Nipper for a friend who used to work for RCA Corp. in Camden. He said he'd be traveling through New Jersey in a couple of weeks, and would I hold Nipper until he could pick him up?

I said sure. Even though I specify in my Craigslist ads that I only want local buyers with cash, this seemed like a special case. Besides, among all the scammers, I could tell this guy was genuine.

So late this morning I met with Walt (no scammer would be named Walt) in the parking lot of a Days Inn by the New Jersey Turnpike. Like a couple of dealers conducting an illicit transaction, he slipped me $30 in cash and I handed him Nipper. He was very happy, and said he was glad I trusted him and was willing to go to such lengths. I said it made me feel better to know Nipper would be appreciated!
Posted by Steve Reed at 4:22 PM