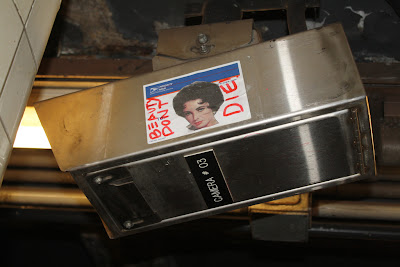 Here's one of my favorite recent street art finds -- a sticker bearing Liz Taylor's violet-eyed youthfulness and reading, "Beauty don't die!" The fact that it's been slapped onto a New York subway security camera makes it even better.

Speaking of recent celebrity deaths, I read yesterday about the death of Bill Hunter, who played numerous crusty old characters in Australian films through the 1980s and '90s. You might know him best as Muriel's corrupt father in "Muriel's Wedding," or Bob, the gent who falls for Bernadette, the oldest of the drag-queen trio in "Priscilla, Queen of the Desert."

To commemorate Bill's passing, we watched "Muriel" last night. Undoubtedly one of my all-time favorite movies, and Dave insisted he'd never seen it. I'm sure I showed it to him before. He probably fell asleep.
Posted by Steve Reed at 11:17 AM