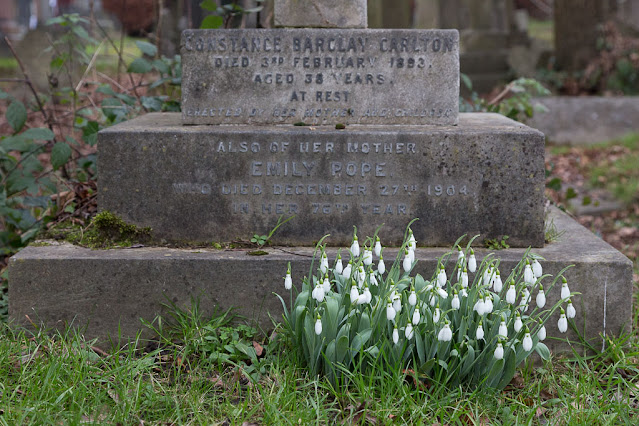 Another weekend, another walk in the cemetery. The snowdrops are coming up all over the place, an encouraging early sign of  spring. 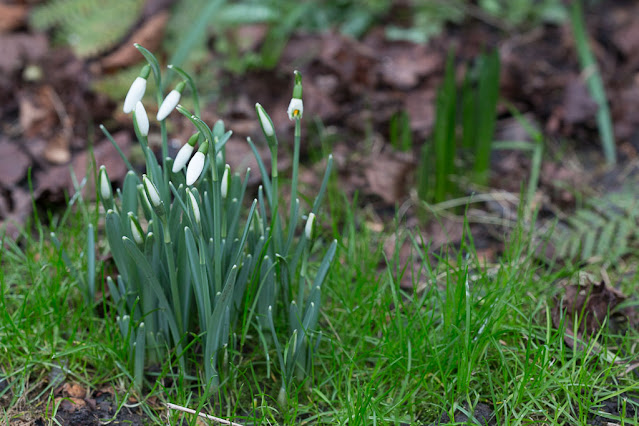 We have this little clump in our back garden, and if I remember correctly those green shoots behind it and to the right are another clump. That second one is a different type and they didn't bloom last year. Let's see what happens this year.

I did a lot of household stuff yesterday -- cleaning, watering plants -- but nothing very interesting.

Did I mention that I've postponed my trip to Florida? I'd intended to go over February break, in just a couple of weeks, but with Covid numbers so high it seems unwise. Especially since my main goal is to visit my mom, and I certainly wouldn't want to expose her to anything. I saw a report yesterday that said case numbers may decline over the next several weeks, so if that happens I'll be in good shape to go in April during spring break.

I've been monitoring my own Covid situation super-closely, given my boss's positive test last week. But so far so good -- I tested every workday and again last night and I'm still negative. I did feel weird last week, but that was probably just my own sense of heightened awareness given the situation, and I didn't have any of the telltale symptoms. Maybe I dodged that bullet, for now.

Oh, and remember the Art Deco building I wrote about a couple of days ago? I belatedly realized it has a Wikipedia page. It used to be an old department store called John Barnes, and the grocery store on the ground floor still bears a sign that reads Waitrose John Barnes, which always confused me. No other Waitrose shops use that name, at least not that I've seen, and I never knew where it came from. Anyway, the building dates from 1935 and the block of flats above it is apparently known as St. John's Court. It's been a Waitrose since the early 1980s, when the John Barnes department store closed.
And now, back to work!
Posted by Steve Reed at 6:34 AM

I didn’t know you had a trip planned to Florida. My trip to the States is set for April and, like you, I’m hopeful it will be a good time to go. Interesting about the John Barnes building. Will have to look it up.

You felt "weird" last week? Some of your photographs suggest that you feel weird most weeks so what's new? Have a good day at work!

The snowdrops are so pretty. I'm sure they are a welcome sight.
That information on the building was interesting. I didn't know that Selfridge had other stores than the one of Oxford street.

At this point I'm wondering if traveling again will ever feel safe. Just when I start to get optimistic about things, another variant pops up.

What beautiful flowers! I'm still not interested in flying yet but want something to look forward to so badly.

All I know is that at the very first opportunity, I am headed to see my daughter. I really don't want to wait in hopes that things will be better later. I haven't seen my girl for 3 years. 3 years ago, it was mutually decided to delay a trip from January until March for better weather. In that small window of time, covid changed everything.

I love a good old cemetery to walk through. I find them so peaceful.

Snowdrops already. I must look for my tiny group. Last year only one or two came up, but hope springs eternal.

I hope you get to see your mom soon. She must be longing to see you, but it's wise not to risk her health. You're thoughtful.

It's freaking COLD here in Florida today. And going to get even colder tonight.
You are wise not to schedule your visit for February. Not because of the cold, of course, which won't last long, but the covid which obviously will never end until every Florida citizen is dead and gone.

Great tracking down ifo on the cool building!
Still cold and grey here, I am impressed that snowdrops are up already , in your garden. Usually we have similar weather , nothing is predictable now.
Covid is relentless, Glad you changed your trip. No one needs to get Omicron- unsure of after effects.

Nice to see the snowdrops blossoming there. It is a beautiful little promise of spring. We're seeing signs here too, and the temps have been crazy warm.
I think it was a good idea to cancel your trip to Florida. Things should be much better by spring, and it probably will be safer to travel.
Have you seen this video? A friend posted it on Facebook and I thought you might appreciate it.
https://www.youtube.com/watch?v=zWHdm7s3SVY

Cheers
P.S. Still Cant Get Over The Olga Girl Art

Love the snowdrops! Sorry you have to wait to see your Mom but April will be here before we know it and hopefully it will be safer by then. Fingers crossed!

Snowdrops! Yes, I think you are wise to postpone. The last thing you want is to come all the way here and then find that your mother's facility is in lockdown.

I have amaryllis bulbs planted here and there and one small clump has already put up a stalk with two flowers and two more buds coming up but no sign of the daffodils yet. Yours always bloom before mine anyway.

I'd be wary of going to Florida with that idiot governor doing his best to make sure every Floridian gets covid.

I had the same "weird" feeling a couple of weeks ago. Mike was convinced he & his dad had Omicron. I was not convinced (and we're pretty sure they didn't), but I kept paying hyper attention to every little thing.

I love snowdrops. We would go to a particular road when we lived in Ohio that had MASSES of them. It was a sign that spring might actually arrive.

Glad you're still negative. I just got 2 free antigen tests in the mail and am expecting 4 more. Hope I don't have to use them! I'd like to visit my daughter in New York in spring but I'll also need to watch the numbers. I think they're dropping although I don't want to get too hopeful!

The snowdrops are beautiful. And a welcome sign of (hopefully) an early Spring? Wouldn't that be super nice! Enjoy your day, hugs, Edna B.

We are supposed to be nearing the end of rainy season in Belize, but in the last 12 hours it has rained 1.8 inches. Lots of trees will begin to bloom in April and May, the heart of the dry season. The season just sort of fade into each other with no major transition like you have in temperate climates.

I looked again at the apartment for sale in the art deco building - hard to imagine how it could look less inviting (except if it had been filthy dirty), but with the right interior decorating it could live up to the exterior. Interesting history too.

Gorgeous snowdrops and no you aren't missing much here, was in the thirties last night and cool today despite the sun.

The snow drops are so pretty, and I hope that you will have a great showing in your own garden this year.

I think that putting your trip off for a few more weeks is a good idea. I know that you are used to wearing your mask, but I found it very hard traveling with mine on for over 7 hours. It felt hard to breath at times. My daughter in law suggested that I buy a large bottle of water or soda and something to munch on and when it became unbearable to slip it down to take a drink or a bite of something. I did inform the airline crew that I was diabetic, and I had the entire front row all to myself, so it was not a problem breathing other people's germs lol.
But you are a thoughtful son to make sure that your mom will be as safe as possible when you do get a chance to visit. We really have to take care of our loved ones.
Have a wonderful day!

I don't know that I've ever seen snow drops in real life! I know they're usually the first to bloom in spring, but I look for daffodils in my area.

I'm counting on things being better by April, too. (please, no new variants!)

It will be a long time before we see any green and longer still to see blooms.

I hope you have dodged the Covid bullet at work and yes, probably a very wise thing to postpone your trip till a safer time. It's grim over here.

I think that will be a more pleasant time to go anyway -- certainly for you, traveling up north!

Yeah, feeling weird isn't all that unusual for me. LOL

I didn't either! I guess technically this wasn't a Selfridge's store, at least by brand. It was John Barnes but owned by Selfridge.

I know! I think we'll all have to get used to traveling with this added layer of complexity. Like taking our shoes off wasn't enough of a pain!

I do too. I need to know something is on the horizon.

Yikes! That's a long time. I don't blame you for not wanting to wait! I did manage to get home last summer, so that's relatively recently.

The power of suggestion is, well, powerful!

I'm not sure she really perceives time or realizes my absence, to be honest. It's hard to tell. (She has dementia.)

Yeah, I think it's better to wait until the numbers go down. God forbid I should test positive and then get stuck in Florida waiting to recover and unable to see anyone.

We usually start seeing snowdrops in January but every year they surprise me!

That video is cute! I think that happens fairly often, to be honest. We haven't found anything handmade in our library but it's probably only a matter of time!

Me neither! It's amazing art!

Yeah, it's the right thing to do, for her and her neighbors.

Ugh! Or be locked down myself! (If I tested positive.)

Our daffodils are on their way and already have flower buds, but no blossoms yet. (Sometimes we've seen flowers by the end of January.)

Once you're on "red alert" it's easy to perceive a lot of little irregularities that seem like they might be symptoms!

We take lateral flow tests provided by work twice a week. It's a pain but good to know where we stand!

Yeah, I think that apartment has potential. Someone doesn't know the value of "staging"!

February in Florida was always my favorite time of year! Those chilly blue days are so wonderful. :)

I've flown once since Covid and I was able to keep my mask down now and then during meals and drinks, and that was enough. I agree it's hard to have it on for so long, but I work with it on every day for almost eight hours!

Do snowdrops grow where you are? Maybe it's too warm?

Hang in there! It will happen!

Better safe than sorry, as they say. My biggest fear is bringing Covid to my mom, but my second biggest is getting stuck there with a positive test and unable to come home!