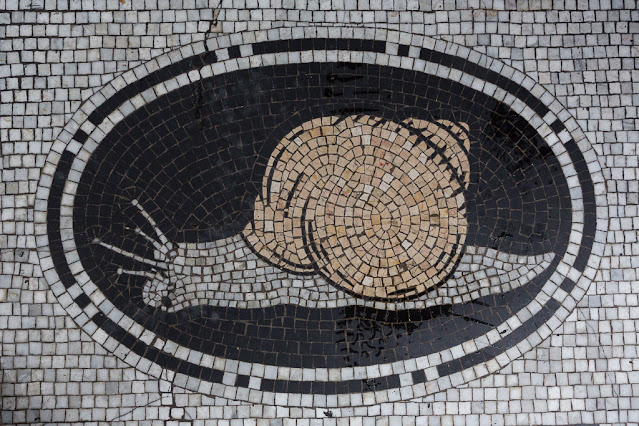 I found this mosaic on a doorstep in Soho earlier this month. At first I thought it was just quirky, but then walking away I realized it guarded the entrance to a restaurant called L'Escargot. Well, that explains it!

I've had a bit of a rough morning already. I woke up at 2 a.m. and could not get back to sleep. I was thinking about my upcoming talks to the 8th graders about my Newbery reading project -- what I should say, what books I should recommend. I'm not anxious about the talks, at least not consciously, but I do want to make sure I'm prepared. Anyway, I didn't fall asleep again until about 4 a.m. and then I popped awake just a few minutes ago -- and today I've got to get to work by 8 a.m. because my co-worker and boss are both out, blah blah blah.

So, anyway, a little hectic, at least mentally.

Vivian's portraits of Olga arrived in the mail safe and sound, so I hope to get them to a frame shop this weekend. 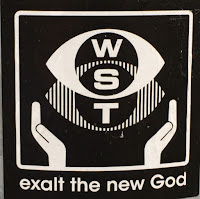 I have a mystery that I'm hoping some of my UK readers might be able to solve.

I found this peculiar sticker (left) while on my most recent Green Chain walk. It was stuck to a lamppost. I wondered what on earth that symbol meant.

There are several "Exalt the New God" stickers featuring televisions and iPhones, apparently from a skateboarding company called Alien Workshop. But I didn't see any online featuring this symbol. Using "image search" I found that it's identical to the logo for Associated Television, an old TV network in England and part of what is now known as ITV -- but with different lettering. Their logo said ATV rather than WST.

The only reference to WST I see online is as an abbreviation for World Snooker Tour. So I guess televised snooker (similar to pool or billiards) is the new God? What do you think?
Posted by Steve Reed at 7:01 AM

Snooker is so inspiring, it’s become the new God. That mosaic is beautiful. Hope you find a second wind for your day at school and that you have a perfect sleep tonight.

If its meaning is that obscure, I wonder why anyone bothered.

The mosaic is very nice, just not what it represents.

What I think is this: the snail mosaic is beautiful. With regard to "WST", I don't know what it means but I expect it is connected with something eerie like religion or Q-Anon. I have seen a similar symbol on a skateboard but there the hands are wide open around a smartphone.

That is a lovely mosaic.
Beautiful work

I think actually that it is claiming television as the new god. I do believe that people are so caught up in television that the lines between reality and unreality get pretty blurred. Which is how we ended up with a ignorant reality television star as president.

I hope the mystery can be solved definitively. I'm curious too.

Could it be Woodstock Sinclair Trust / Toimchei Shabbos? It's a jewish charity.

The snail mosaic reminds me of something they'd find in ancient Italy or something. It's pretty cool.
Of course I have no idea who the new god is.

I do like the mosaic and I have no idea about the sticker.

My google search led me to Subhanahu wa ta'ala which is often shorten to SWT in Arabic and loosely translates to "Glorious and Exalted Is He." So my guess, is that it is a Muslim reference.

Your pictures of the entryway mosaics have got me to pondering what mosaic would I put in my doorway? I'm not sure right now but I will be pondering it awhile I think.

I love that mosaic! Sorry about your lack of sleep. I REALLY hate it when I start the day knowing I haven't had enough sleep (which is almost every day because I will not go to bed at a reasonable hour).

I love the snail!
I hate it when I wake up like that and it happens way too often. Good luck with the talk. I'm sure you will do well.
I've got no idea on that sticker.

The snail mosaic is lovely.
Sorry about your 2:00 am worries. Hope all goes well with your talk. I'm sure you'll have plenty of interesting and fun stuff to share with the students about all those books.
Interesting sticker...Mmm? I hope you find an answer.

I love the snail mosaic. Hard to tell from the photo - how big is it?

I figured out the WST mystery. It stands for We Stay True, an independent "imprint" (record label, I think?) formed by a DJ. The sticker is meant as an "homage" to Alien Workshop.

Thanks for solving the mystery for us!
I like that snail mosaic, altho, I have never eaten snails!
Hope you get a good sleep tonight, Steve!

You've got some fine investigative skills there, Steve.

I'm glad you solved the mystery! I really like the mosaic, especially knowing why it's where it is! I'll pass on escargot, though. It smells great with all that garlicky butter, but ugh. No.

I do like the snail mosaic, too. A translation in art.
I suspect you're a little more nervous about the talk than you're letting yourself think. Well, the anxiety will become energy once you get going. And you're so well prepared you'll be ready for any question. Let us know how it goes.

Another mystery solved! Good luck with the talk to the kids.

I don't know what it is but recognised immediately that it was knocked off from the old ATV logo, which I think was a regional ITV company serving the Midlands.

Hope the talk goes well! Waking up in the middle of the night is so disorienting. I (mostly) sleep alone so it gives me a chance to hear every creak and noise.

Yeah, I love the mosaic. Quirky but also beautiful.

I don't mind snails as long as they're not on MY plants!

Yeah, you've seen the regular Alien Workshop stickers. I figured out the WST mystery, as I mentioned below -- it's a record label. I have no idea why they used an old TV logo as the basis for the design.

Isn't it great? I'd love it on my front doorstep!

That's what I thought, too, and maybe it IS kind of saying that. Why use a TV logo otherwise?

The power of celebrity and name recognition is out-of-control in our culture.

That's a good guess, but apparently not -- see below.

Sometimes I don't mind it. I just lie there and think about things and it allows me to get organized. But if I'm stressed it's no fun.

It does look ancient, like something found on the floor of an old Roman villa.

I can't walk past an image like that and not wonder!

That's an interesting theory -- but then wouldn't the sticker say SWT rather than WST?

I wonder how much a mosaic would cost? I bet it's insanely expensive.

Apparently it's natural for people to wake in the middle of the night -- in the Middle Ages they even had a name for that time, though I can't remember it now.

It fills a large doorstep, the kind you'd find at the entrance to a restaurant. I didn't measure it so I can't remember the specifics!

Snails don't taste like much by themselves. It's all about the butter and garlic.

That reporting background is paying off! LOL

The texture of escargot isn't great. Snails are "desperation food."

It's entirely possible that I'm subconsciously anxious. I guess it's natural when speaking in front of an audience, even a bunch of kids!

Thanks! I will keep you all posted. :)

I think the sticker must be saying something about TV or media being the New God, as well as advertising the WST "imprint" -- hence the TV logo. But why an OLD logo? Maybe it's less likely to get the sticker makers sued.

She had one already this morning! And she'll get another soon enough. :)

At least then you could turn on the light and read. But I can't do anything when Dsve is sleeping next to me, except get up and go into the living room.

Hah, I got my letters mixed up and was researching a whole different acronym... or you have a dyslexic Muslim making stickers!