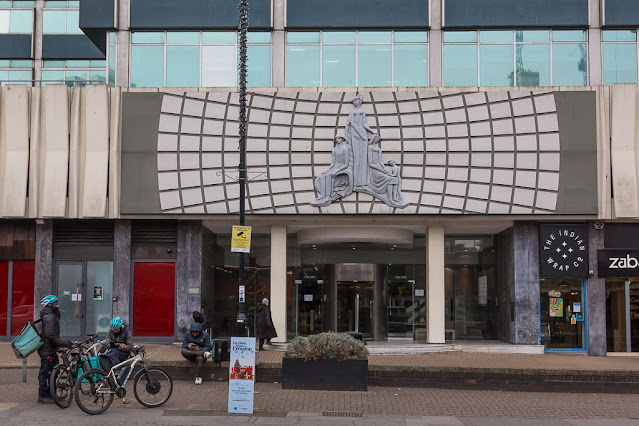 Another picture from Croydon, this one showing the very '60s office building known as AMP House. (It's named for the Australian Mutual Provident insurance company, its original occupant when it opened in 1968.) The Croydonist has some more good images, featuring some recent interior art installations, and author John Grindrod calls it "one of my favorite buildings in the town, chiefly because of the amazing atomic-age relief above the entrance, and the concrete chevron panels surrounding it."

Mid-century architecture often gets short shrift, but I tend to like those '60s clean lines. Grindrod does too, and his post (linked above) shows many other similar buildings of that vintage. Apparently Croydon went through some boom years for office development in the '60s and '70s partly because of laws restricting tower construction in Central London.

Thank goodness -- the weekend! I know it's kind of ridiculous for me to complain of fatigue given that I've only worked one week, after three off. But man, what a week. My mission this weekend is to finally finish my last Newbery, "The Story of Mankind" -- I'm up to the Reformation -- as well as take some walks with the camera.

In other news, my brother reports that his GMO pumpkin is finally rotting. He said: "Be sure to tell your blog readers so they understand that I do in fact know the difference between real and plastic pumpkins! Ha!" 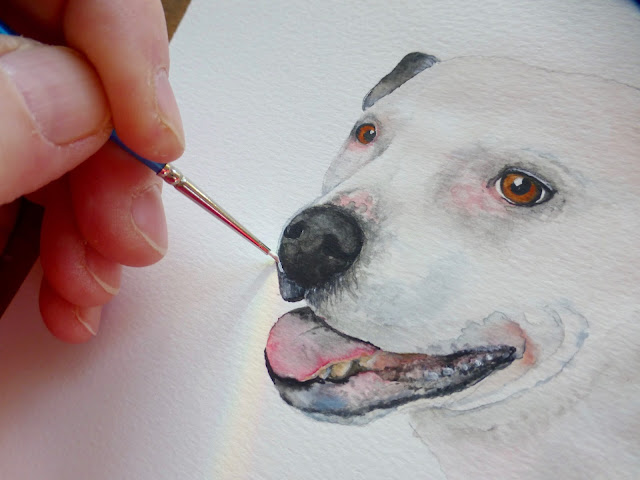 And blogger Vivian Swift, who is a skilled watercolor artist, has painted a portrait of Olga! You can see the process here (scroll about a third of the way down). Vivian contacted me a couple of weeks ago with a request for photos of Olga, so I sent her some including one we'd taken on the beach in Broadstairs. That's the one she chose to use as a model, and it's interesting to read how she assessed the image and the difficulties posed by painting a mostly white dog with pink skin tones, and to see the process she used to bring Olga to life on paper.

She's promised to send me the paintings, so I can't wait to see them in person.


Finally, in the "clothes I wish I owned when I was a kid" category, my co-worker had a shirt with her yesterday belonging to her kindergarten-age son. Have you seen these shirts with sequins that you can brush one way for one color and another way for another? My thrilling video demonstrates the effect. Apparently you can also buy shirts where the sequins are printed with portraits of your spouse or child or pet, so you can brush them one way to reveal the picture and another to conceal it. And I thought Pupsocks were impressive! (So last year, now.)
Posted by Steve Reed at 7:51 AM