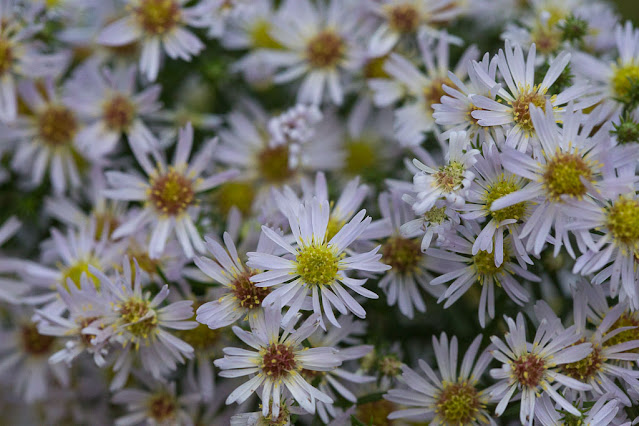 Some of the Michaelmas daisies are still going strong, as you can see, but others have passed their peak and I'm starting to cut them down. As much as I like these flowers I don't want them to re-seed too much. They're prolific and they'd take over if I let them.

More shelf-reading at work yesterday. I found a few more out-of-place books and realized another one, an old volume about American musical traditions, is missing entirely. I think it's one we weeded and somehow failed to remove from the catalog. I love tying up little loose ends like this!

Some of you wondered yesterday why I use a list when I'm shelf-reading, rather than simply going down the line and making sure everything's in Dewey decimal numeric order. The fact is, a list makes the job much easier and faster. When you're just looking at the shelf you've got to calculate integers and alphabetize, but with a list, you simply match. Plus it prevents mistakes. Know what I mean?

Also, one of you mentioned kids who would hide a book in the library so that only they could find it. We had that happen earlier this year -- we could not locate a particular book ("Race to the Sun" by Rebecca Roanhorse) that a boy had requested. I told him that it wasn't where it should be on the shelf and we'd keep an eye out for it. Well, a day or two later, the same boy came into the library and said, "I know where the book is." He took us to a completely different shelf et voila -- there it was. Now, he MUST have put it there. Otherwise, how would he know where it was? I don't know why he then requested it unless he was simply testing our abilities as librarians! 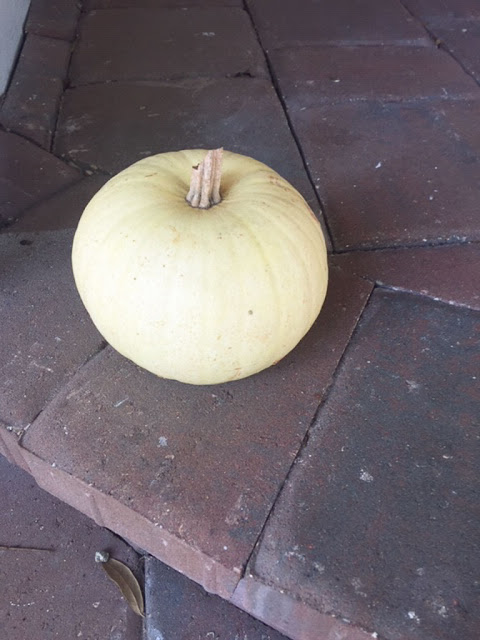 My brother sent this picture of what he calls his "GMO pumpkin." His family bought it at the local pumpkin patch before Halloween LAST YEAR, and it's been sitting on their front steps in Jacksonville ever since. It refuses to degrade, even in the muggy heat of a Florida summer. Apparently they had two of them, but the larger one -- which was orange -- succumbed last April. Squashes and gourds are renowned for their longevity, but this is ridiculous!
Posted by Steve Reed at 7:57 AM