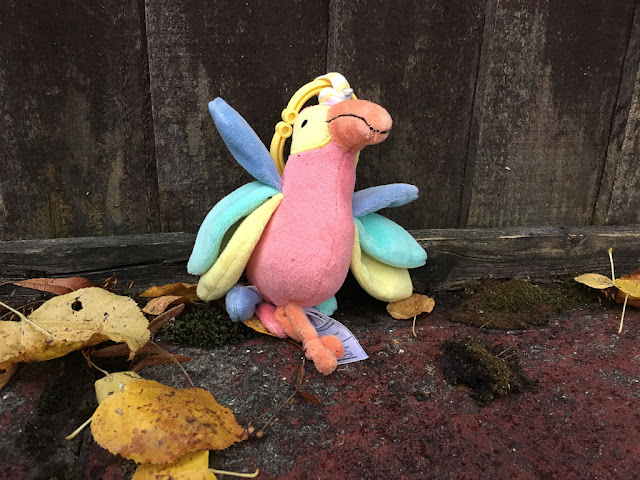 Today, a random collection of photos from my iPhone.
First, an exotic fowl seen perched on a wall on our street. I am forever finding these little toys from baby strollers littering the sidewalks. I don't know why the manufacturers can't make them so they don't fall off. (I guess that guarantees parents will buy more?) 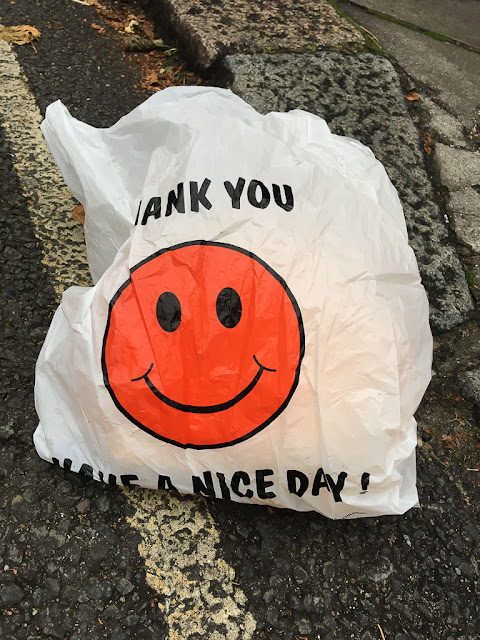 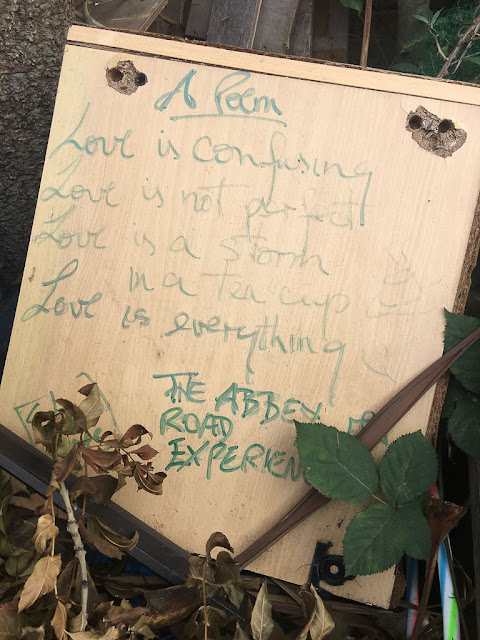 A poem (you know it's dubious when it has to TELL you it's a poem) on the side of some discarded furniture near Willesden Junction. (Nowhere near Abbey Road, incidentally.) 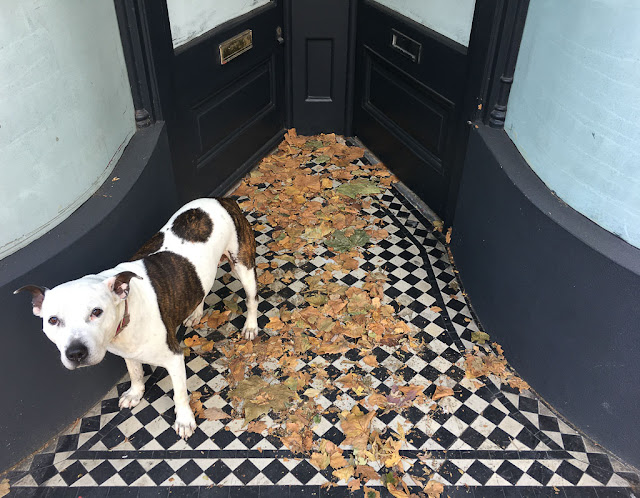 Remember my shot of Olga in the tiled shop entrance? Well, the entrance has since become littered with fallen leaves, so I thought I'd do a follow-up picture. She's still not thrilled about being asked to stand there. 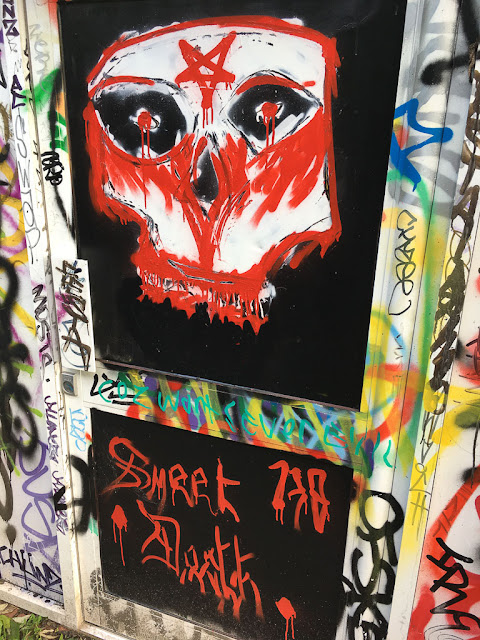 Some scary-looking graffiti on Billy Fury Way, just in time for Halloween. 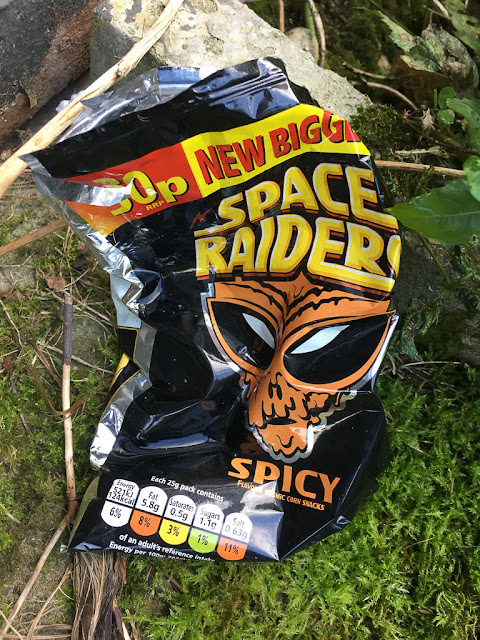 This is an interstellar brand of "cosmic corn snacks." I would totally have eaten these a kid. 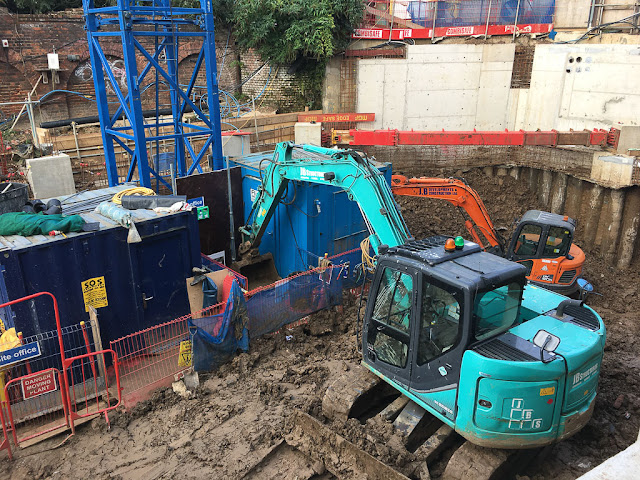 Here's another over-a-wall picture of a construction site. This used to be an old pub, and not only has it been torn down but they've excavated a gigantic pit in its place. What's going in here, next to the Finchley Road and Frognal overground station, I have no idea. I suppose I could look it up if I get motivated.

(Addendum: I got motivated. A block of flats was announced several years ago for the site, but it was supposed to be finished in 2019. So either there have been significant delays or perhaps the project has evolved into something else, or been sold to another owner. Who knows.) 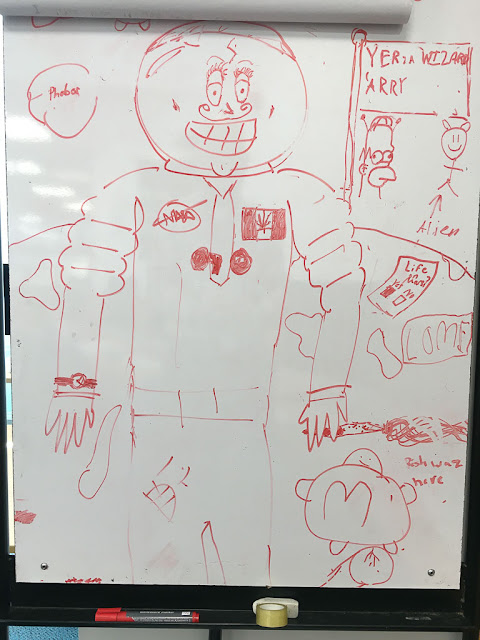 A mischievous doodle some kids left on a whiteboard at work -- an astronaut, I believe, noting that there is indeed life on Mars. (Funny how life on Mars continues to be a myth that haunts our imaginations, even though we've pretty much proven there's nothing there but rocks.) 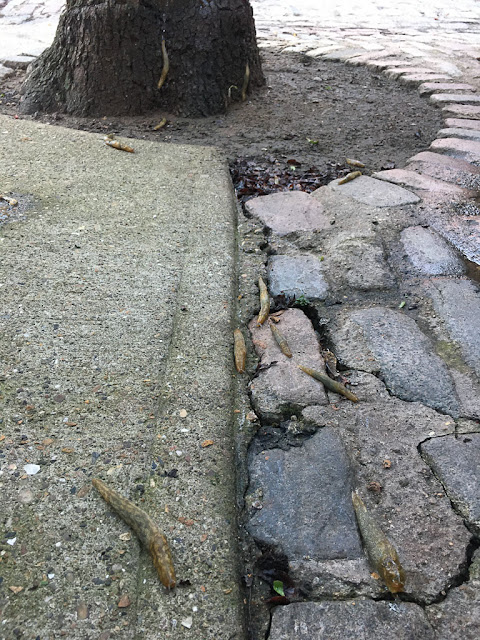 And finally, I once again came upon a parade of slugs (a dozen in this photo alone) descending this tree and crawling along the sidewalk, all in the same direction. This is the second time I've witnessed this phenomenon at this location. Do these slugs live or breed in that tree? What makes them come down to the ground? Where do they go from there? (It's mostly paved in the immediate vicinity.)

Very mysterious!
Posted by Steve Reed at 7:17 AM