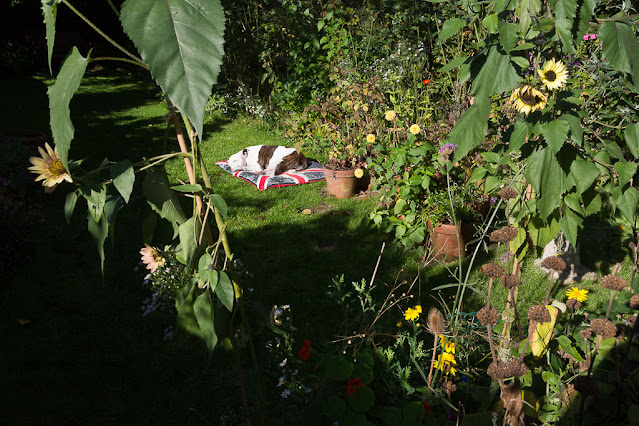 This was Olga in the garden yesterday morning. I know she appreciates having me home during the day, partly so I can let her into the garden if the sun is shining. There's nothing that dog likes more than lying in the sun.

Unfortunately, I'm going back to work this morning, so she'll have to lie on the carpet and make do with the patches of sun coming through the dining room windows.

I also did laundry and discovered that our newly repaired boiler was leaking. Drops of water were falling on the kitchen counter. So, following my mom's dictum -- "everything has to be done at least twice" -- I called British Gas back and had an engineer return. Fortunately I had a different (and less talkative) engineer this time, and he corrected the problem. I told him I felt stupid calling him back for such a small thing, and asked if there was something I could easily adjust to stop the drips should they return -- but he assured me that he didn't mind an easy call and said I shouldn't try to adjust the boiler myself. Which was my instinct too.

Oh, and remember our spicy situation? That shelf of spices below the boiler that I set out a few years ago, hoping that Dave would be encouraged by their greater visibility to use them and stop buying more? Well, we did a massive clean-out there and in the spice cabinet, and threw away a lot of stuff that had expired. Some of it was very, very expired -- like, anywhere from five to ten years ago. 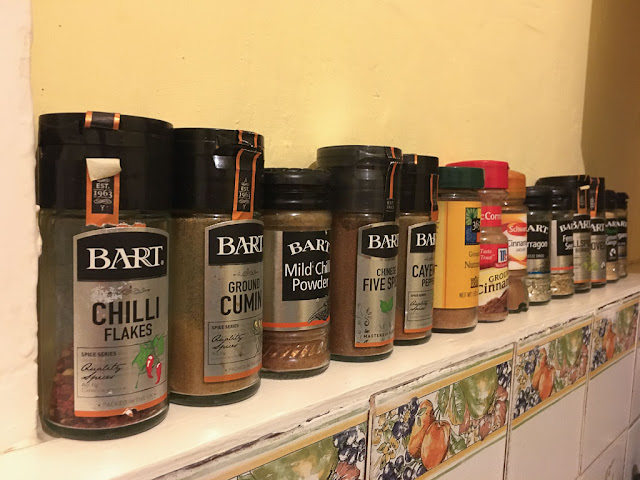 Incidentally, for the past few years I've been working my way through our oversupply of cinnamon by using it in my coffee, and we're now down to two bottles and a little box -- from six containers, originally! (Dave has used some too, obviously. I didn't consume three bottles of cinnamon by myself.)

I'm sure that some of these "expired" spices were fine, but honestly, we just don't need poppy seeds or fennel seeds or some of the other stuff we had. Some of them I don't think we even bought -- I think they were given to us here and there by departing school families who were moving back to the states. 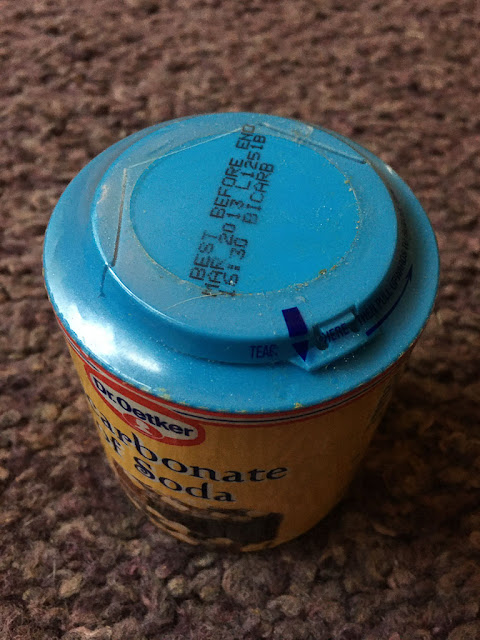 I did not throw away this sealed container of bicarbonate of soda, even though it expired in March 2013. I mean, does bicarbonate of soda really go bad? I hate to throw it away when it's never even been opened. What do you think?

Dave, meanwhile, got his Covid vaccine booster yesterday, at the invitation of the NHS, as well as a flu shot. I'm still waiting to hear from them, but supposedly I'll be able to get my booster fairly soon.
Posted by Steve Reed at 6:44 AM