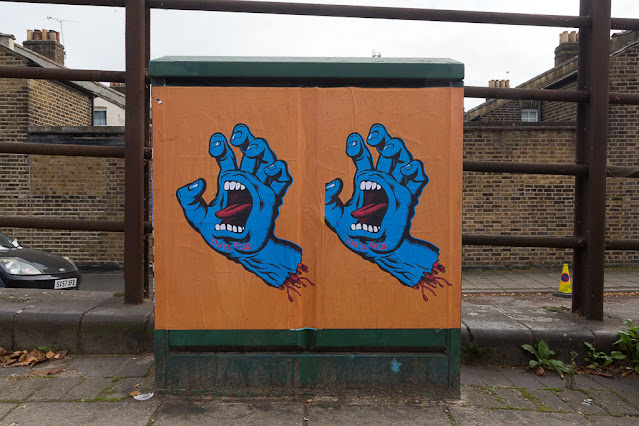 Walking with Olga back from Wormwood Scrubs on Sunday, I passed these vivid posters. This is the "Screaming Hand," a well-known trademark for Santa Cruz skateboards. Kind of an interesting image to find in northwest London, but I guess skate culture is everywhere.

Here's the story of the creation of the hand, by artist Jim Phillips, in 1985. I was once in Santa Cruz myself, way back in 1991 (when the hand was only six years old!). Unfortunately I don't remember much about it. I drove through with a friend from San Francisco on the way to Big Sur. Here's what I wrote in my journal afterwards: "The drive to Santa Cruz was hell. All kinds of traffic and road blockage -- it was really irritating and my temper was short. But after Santa Cruz things opened up as we drove south through Monterey and Carmel, past vegetable fields, pastures on the coast and stylish beach homes."

That's my sole exposure to Santa Cruz -- traffic. I have even less experience with skateboarding.

Speaking of obscure sports references, take a look again at yesterday's post. Do you see on the ceramics shop window the creature at lower left saying "COYS"? I wondered what on Earth that meant. Well, through the magic of Google, I learned that it's a football (soccer) reference that means "Come on You Spurs!" It's a reference to the Tottenham Hotspur football club. Apparently our ceramics dealers are fans.

Today and tomorrow are going to be fairly low-key days at work. The teachers are all having parent-teacher conferences, which used to happen in massive face-to-face gatherings in the school gym but are now held entirely on Zoom, much to everyone's satisfaction. There are no kids around, so for me it's time to work on catch-up projects in the library. I think I'll just do some shelf organizing and weeding.

Remember how I said Dave got his Covid booster shot not too long ago? Well, after the fact, he got a very peculiar letter from the NHS saying he needed a third shot -- and that it should not be considered a booster but part of his original set of vaccinations. (This is because his Crohn's medication leaves him somewhat immunocompromised.) He was told if he'd already had a third shot, he could ignore the letter. And if he'd already had a booster, he could likewise ignore it. So we ignored it, but he's still scratching his head about whether the shot he got counts as a booster or not, and what the difference might be, if any. Mystifying!
Posted by Steve Reed at 6:21 AM