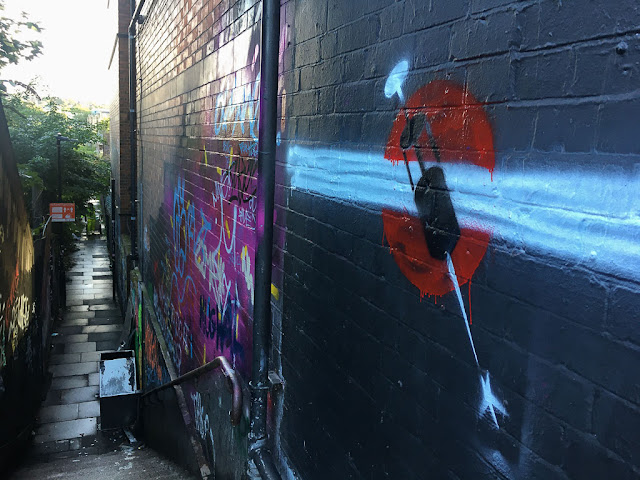 Here's some graffiti that recently appeared by the steps leading down to the creepy and rather forbidding footpath known as Billy Fury Way. Is it pro-vax or anti-vax? Or maybe it takes no position. It's just a big needle. You can barely see a council street sweeper down on the path beyond the bush, vainly trying to clean up the massive quantities of litter along the walkway. You'd need a garbage truck to get it all -- probably several garbage trucks. And haz-mat suits.

I busted out the Halloween decorations at work yesterday. It might seem a bit early, but it's October -- so close enough. I hung my big rubber bat over my desk and created a Halloween book display: 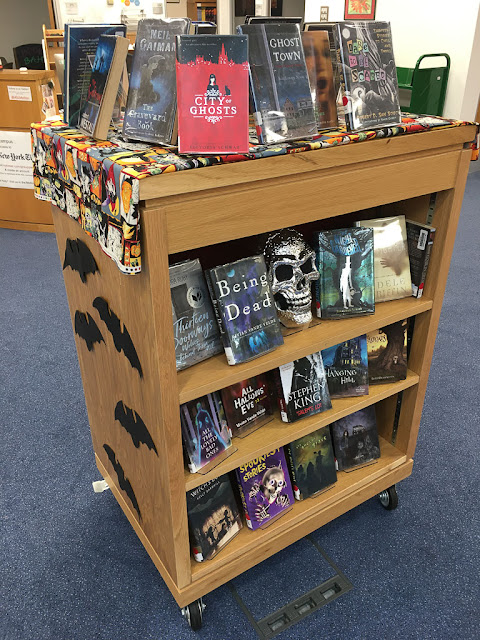 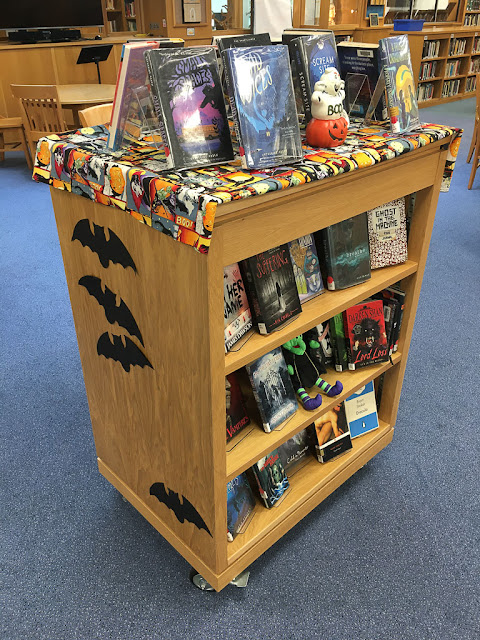 I'm not sure it would win any prizes but it gave me something to do! I made sure to prominently feature "The Graveyard Book," my most recent Newbery. I'm now reading one from the 1930s called "Invincible Louisa," a biography of Louisa May Alcott. When it was written, a few people who knew Alcott were still alive, so apparently it contains some first-hand accounts. I'm not exactly thrilled at the prospect of reading it -- I've never even read "Little Women," which I probably should remedy someday -- but as is often the case, maybe it will be more interesting than I anticipate.

Ellen recently mentioned on her blog a new right-wing theory that liberals are trying to trick conservatives into not taking the Covid vaccine, in order to kill more of them off. The theory is that by advocating for the shot, "the organized left is deliberately putting unvaccinated Trump supporters in an impossible position where they can either NOT get a life-saving vaccine or CAN feel like cucks caving to the ugliest, smuggest bullies in the world," according to John Nolte, a columnist for Breitbart. (Since when do doctors and scientists constitute the "organized left"?) Nolte's column is fairly nasty but at its heart he embraces statistics about Covid deaths and the need for the shot -- although he backs off a bit at the end, insisting that he's "not telling or badgering anyone to go out and get vaccinated. That’s your choice."

The Atlantic did an interesting article about Nolte's column, exploring the possibility that right-wingers avoid Covid vaccines merely because people they perceive to be leftists are telling them to get vaccinated. To be contrary, in other words. Personally, I think Nolte is trying to advance an idea that will enable Trumpers to get the shot without feeling defeated by better-educated experts, i.e. "leftists." If they see getting vaccinated as an act of rebellion against a liberal plot, they might go for it. It's laughably absurd, but to employ a phrase I used to hear on TV shows as a kid, "it's so crazy it just might work!"

Did you notice when Facebook crashed yesterday? Dave did -- he spends a lot of time on Facebook. He kept exclaiming about it being down, and when he'd been saying that for a couple of hours I went online and read about the outage. I must confess I would never have noticed it myself -- I haven't been on Facebook in a couple of weeks. (Or Instagram in many months. I'm not on What's App at all.)

It's funny -- when I first got my Facebook account in the mid-to-late aughts, I loved it. It seemed amazing to be able to keep in touch with so many people from my past. But now it seems onerous, and not just because of questions about its algorithms and the ways it manipulates users. I'm tired of the scrolling mentality, the barrage of information about so many people, some of whom -- to be honest -- I barely know. I've even thought about taking my account down, at least temporarily, but I haven't yet. Blogging seems so much more civilized and thoughtful, even when I'm writing about walking the dog!
Posted by Steve Reed at 7:04 AM