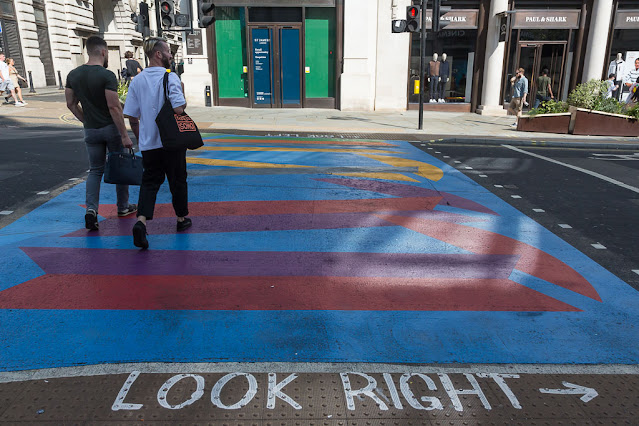 These are some of the colorfully painted crosswalks around Piccadilly Circus installed this summer in an "art takeover" that saw the area transformed by public art.

I took these pictures at the beginning of September, by which time the takeover had technically ended, and these were merely brightly painted afterimages. I believe they're the work of artist Vanessa Jackson, and though they look like lettering (to me) they're apparently abstract designs. 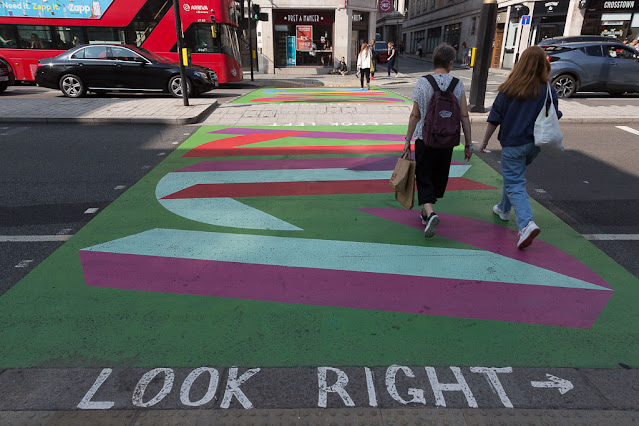 My picnic with work colleagues yesterday was a damp experience. Although the weather forecast called for no rain, the skies were gloomy and no sooner did we spread out a picnic mat in Regent's Park and sit down, we were enveloped by a fine, misty precipitation. We stayed put, though. As I always say, in England, if you wait for good weather to do anything, you'll never do it.

We were fine until someone's golden retriever piled headlong into our food in the middle of the blanket, moving with the speed and purpose of a heat-seeking missile. Most dogs, when they encroach on a picnic, will at least make a pretense of wagging their tails and being friendly to the people involved. This dog didn't care. It had fire in its eyes.

The owner apologized and pulled it away, and we agreed to throw out our crackers and several other packages of food that had been trampled and/or licked. And then, maybe half an hour later, the dog came back! This time the owner was nowhere near, and I lured it away with another cracker and sat with it until she strolled up. It was actually a very sweet dog and it knew it was in trouble. I think it was a bit underfed and was very hungry.

Anyway, other than that, it was an uneventful picnic. Except that I could have maybe possibly drunk a little too much champagne. I am feeling fuzzy this morning.
Posted by Steve Reed at 7:13 AM