Not Quite Al Capone's Vault 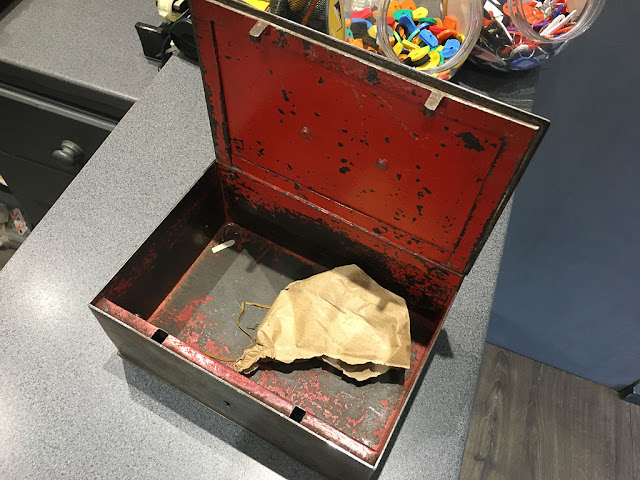 As you can see, yesterday I tackled the mystery of the found lockbox.

I zipped home right after work and took it to our neighborhood locksmith. He and his assistant oohed and aahed over it when I brought it in, exclaiming about its age, and I told them that I'd found it on the street and had no idea what, if anything, was inside. They readily admitted they didn't have a key that would fit it, but after a quick examination, the locksmith suggested simply popping it open with a heavy screwdriver.

"I get fifty percent of whatever's inside," he joked. At least, I think it was a joke. I laughed but didn't quite agree.

I told him I didn't want to damage the box, though to be honest I wasn't sure I wanted to keep it -- especially if I couldn't get a key for it. But he didn't think he would hurt it. He managed to crack the lid enough to see that there was paper inside, which heightened our curiosity, and eventually he pried the box open without any trouble or obvious damage.

It was pretty much empty, as I expected. The paper turned out to be a featureless piece of brown wrapping paper. But there was also this: 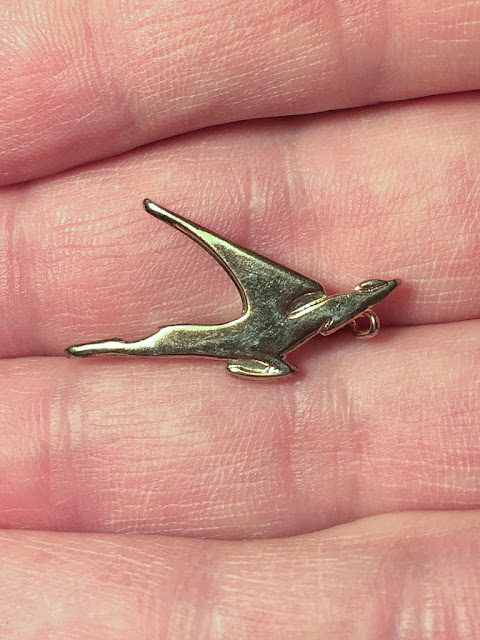 It's a small gold-tone pin -- definitely not real gold, but kind of interesting. At first I thought it was broken because I couldn't figure out what the shape was supposed to depict. I brought it home to Dave and we puzzled over it. Was it a pterodactyl? I found an identical pin listed on Etsy, and the seller there called it a pterodactyl, but I wasn't convinced. It looked more like a winged deer or an antelope.

Finally, after quite a bit of Googling, I figured out that it is a lapel pin from South African Airways, featuring their old "flying springbok" logo. This is a streamlined version that the airline used between 1971 and 1997, when they rebranded and dropped the springbok altogether.

So that was kind of interesting.

And here's the best part -- the locksmith didn't charge me, since all he did was force the box. So this whole adventure cost me nothing.

I still have the box, which I'll wedge open with a piece of cardboard or something and stick in a closet. Maybe someday it will be useful to someone. And obviously I'll keep the springbok. 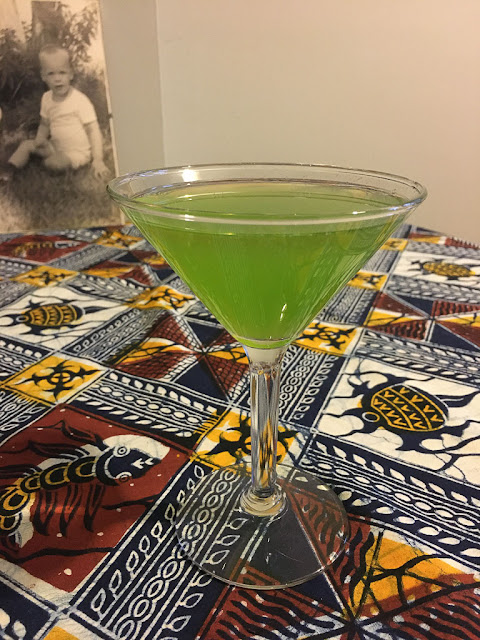 After all that, I celebrated by making my craft gin club cocktail of the month, dubbed "The Banshee." The recipe tested the physical limits of my martini glass, as you can see. (Yes, that is a picture of me as a kid in the background.) The Banshee was yummy and contained spiced gin, lemon juice, cocktail syrup and Polara Mandarino Verde citrus drink from Sicily. There was more than enough Mandarino for one cocktail, so once I opened the bottle I was forced -- FORCED, I tell you -- to drink two.