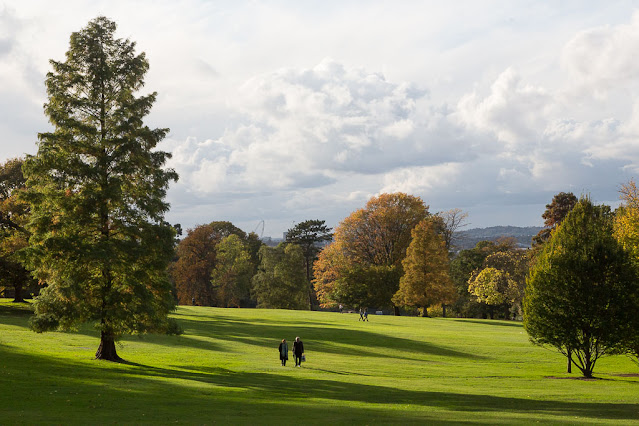 Well, the weather wasn't as bad as I feared it might be yesterday -- in fact in the afternoon we even had some sun. I wound up taking Olga to the Heath. That's Golders Hill Park, above, which is looking quite autumnal. You can see the arc of Wembley Stadium on the horizon, center-left.

But before I got out with the dog, I wrestled with a few projects. I packaged up and mailed some Christmas presents for my nieces, and that wound up being an odyssey that required a shopping trip for packing peanuts and tape, and then a schlep down to the post office in Swiss Cottage. (Both of our local post offices are closed on Saturday, for some reason.) It cost me about £35 to mail the box, and if I'd added tracking it would have been another £15 -- so I didn't. I may regret that. The clerk said it would take three weeks to arrive, so I told my brother to expect it in six.

Then I got the broken screen on my iPhone replaced. I'm not sure where I broke it, but it's been cracked for ages, and I'd hesitated to replace it because I thought it would cost a fortune. (When I had my phone screen replaced at the Apple Store back in New Jersey I think I paid something like $100.) I took it to the local computer repair shop and he only charged me £5! If I'd known it would be that cheap I'd have done it months ago.

Finally, I tried to buy one of those scandalous books I mentioned the other day -- "Lawn Boy" by Jonathan Evison. Not only did my local bookshop not have it, but apparently even the publisher is out of stock, as is Amazon. See what I mean about censorship boosting sales? 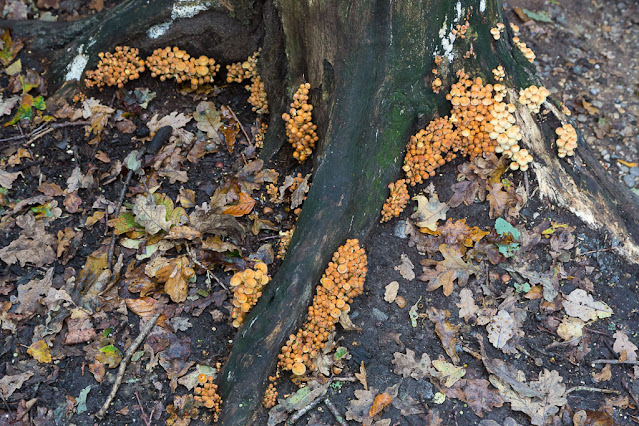 Just before lunch I trimmed back a lot of dead overgrowth in the garden, and filled two yard waste bags. Then, after eating, Olga and I headed out. We walked all of the West Heath and Sandy Heath, and briefly ventured onto the Extension. I was worried she'd push herself to go too far and suffer for it later, but she seemed fine and enthusiastic about the squirrels, as usual.

With all this damp weather the mushrooms are out in profusion. Can you see that crescent of white mushrooms in the leaves? A fairy ring, I believe it's called.

On Sandy Heath, someone was having (or already had) some kind of Halloween event. There were pictures of ghosts and evil-looking pumpkins tacked to the trees, and this spray-painted onto the ground... 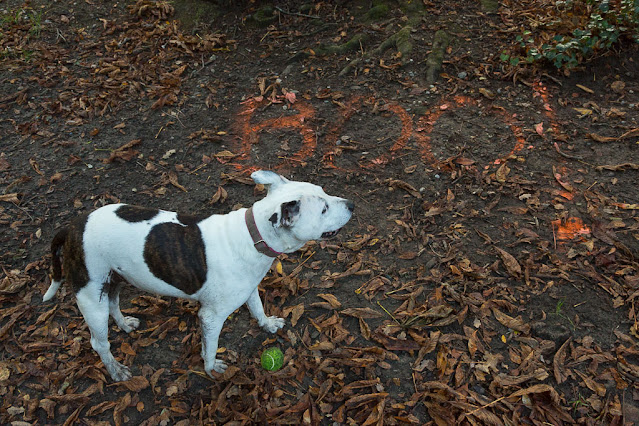 Maybe it was a ghost party, because I didn't see any people around. Hopefully someone will come back and take the signs down, at least.

Oh, and of course, I found a few interesting things on our walk, including an old brown glass Schweppes bottle and a potted prayer plant that someone had discarded. The bottle cleaned up well -- I'll try to remember to photograph it for a future post. The plant is a bit bedraggled but I think with some recovery time it will bounce right back. (Wasn't I just saying we have too many potted plants?)

So, all in all, it was a good day and I got a lot done. Tonight, as is our custom, Dave and I are laying low to avoid trick-or-treaters (even though we never get any).
Posted by Steve Reed at 5:26 AM