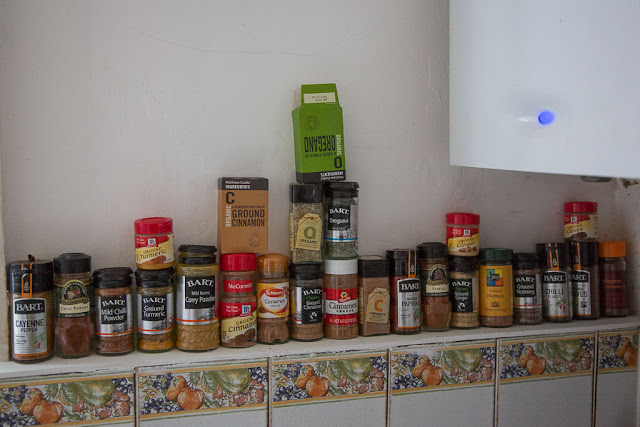 I have been meaning, for ages and ages, to organize the spices in our kitchen. We'd been storing the spices in one of the cabinets, on the top shelf, with the unfortunate result that it was very hard to find anything. You'd have to pull out a hundred little bottles to find the one you wanted.

And that had the unfortunate result of creating a lot of duplication -- because rather than pulling out all those bottles, Dave would just buy another one.

This came to a head on Thursday night, when I stir-fried some shrimp and wanted to use some of the key-lime spice I bought in Key West years ago. I had to practically empty the cabinet to locate it.

So yesterday morning, I got to work.

A few months ago, when the handyman came to do some minor repairs, he installed a little shelf along the top of the tiles on one of our kitchen walls. (It used to be a gaping open space -- the sad result of someone's home improvement project gone awry.)

I decided to line up our spices along this shelf. If they're more visible, perhaps Dave would be more likely to use them. (I'm sure I would be, though I rarely cook so I don't really have the opportunity.)

I knew from what little rummaging I'd done that we had several jars of some spices. But I didn't see quite how crazy things had become -- we have SIX containers of cinnamon! Three of oregano! Two nutmegs, two chili powders, two ground cloves, two gingers, two paprikas.

Some of those spices definitely came with us when we moved from the USA in 2011. For example, one of the jars of cinnamon is Shop-Rite brand, which is from New Jersey. And the McCormick spices are also all American, I'm pretty sure.

Dave has said we should throw out some of the older spices, but I think they're probably fine. After all, my mom had spices from the 1960s in her cabinets right up until she moved a couple of years ago. (I'm not sure she ever used them, though.)

I did throw away a jar of lemongrass sauce that expired in 2011. I don't think we even bought it -- I think someone gave it to us. And there are limits.
Posted by Steve Reed at 6:25 AM