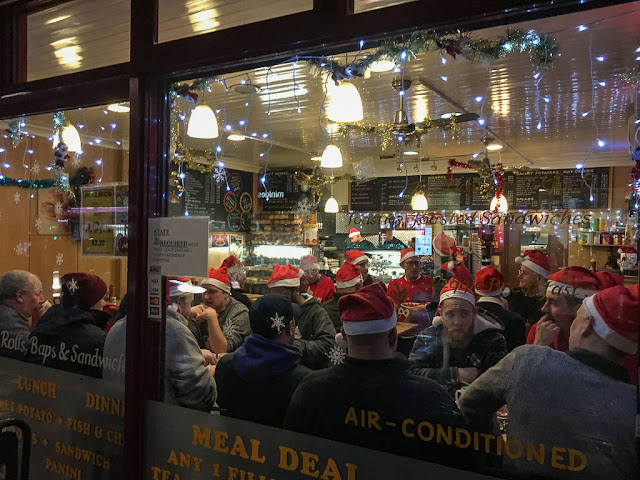 Dave and I were on our way to work early yesterday morning when we passed this cafe near the West Hampstead tube station. There were at least 17 (by my count) guys sitting in there wearing Santa hats! (Well, that includes the waitress and the guy behind the counter.)

Yesterday was absurdly busy. There was a lot of "churn" in the library. I think teachers were sending, or even bringing, classes of students in to get books for the holidays. Some of the students didn't really want a book, though, so the minute class was over they'd return it. I actually praised a ninth-grader for courageously choosing "The Three Musketeers," a hulking doorstop of a volume, and not half an hour later it was in the book return. 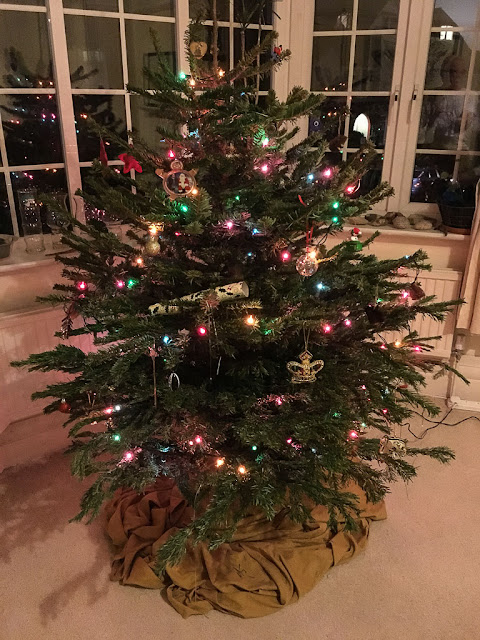 Then, when school ended, it was time to salvage the library Christmas tree. Remember how I arranged to "adopt" it? I took all the school's ornaments off -- but left the lights -- and then bundled it into a bedsheet with the help of Dave and my boss Karen. Dave and I carried it out of the school and loaded it into a taxi, and set it up at home with our own ornaments. (We brought the school's tree stand home, too.) Now it's aglow in our front window.

I suppose we did save some money. It's a £55 tree and it cost us £13 to get it home -- including a £3 tip for the taxi guy, whose cab remained surprisingly free of stray pine needles.

Hopefully it will last another ten days! It still looks fairly fresh because I've been watering it carefully, but that's obviously only going to carry it so far. I'm glad we still have a bit of time until Christmas -- I have to buy a few more things for Dave. Oxford Street beckons!
Posted by Steve Reed at 6:34 AM