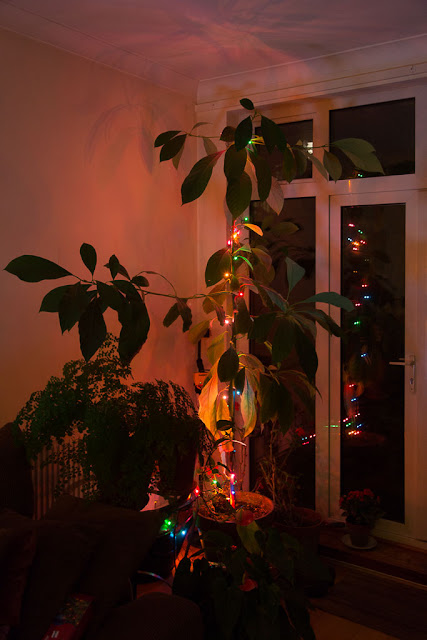 Last night Dave and I had elaborate plans (well, not so elaborate) to go get a Christmas tree. We were going to walk up to the local lot, but just as we were about to head out the door, we began debating the possibility of adopting the library tree when school closes next week. After all, it just gets thrown away.

We figured, why buy a tree of our own when we can probably bring that one home?

How to get it here is still an unresolved question. But never mind that -- we took off our jackets and abandoned our tree-buying plan. Meanwhile, in lieu of a real tree, I dug out the Christmas lights and wound them around the avocado in the living room. It's the most festive avocado tree in London, I'm pretty sure! 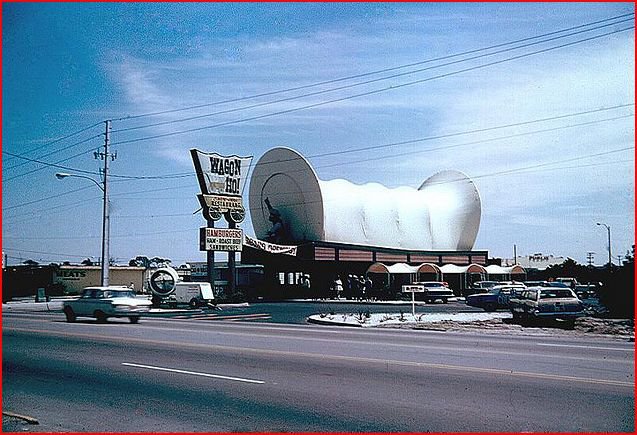 In even bigger news, I finally solved a mystery that has been bothering me for years.

When I was a child, there was a restaurant on Florida Avenue in Tampa shaped like a big covered wagon, with a statue of a bearded guy at the front, his arm raised as if driving a team of horses. I remembered this place vividly, even though I never ate there. (I tried to get my parents to go, but Mom said it was "nasty." I'm not sure how she knew.)

Anyway, every once in a while -- maybe once or twice a year -- I'd do an Internet search to try to find a photo of this place. I was never successful, which seemed very strange. Wouldn't you think someone would photograph a building shaped like a covered wagon?

I seriously began to wonder whether I'd imagined it.

But finally, last night, I dredged up a couple of pictures. Turns out the name I remembered for the restaurant wasn't correct, at least not originally, which probably hampered my earlier searches. It was called Wagon Ho! and there were several of them in Florida. I don't know which location is in the photo above, but the Tampa building looked just like that.

Here's an interesting blog post about the brief history of the Wagon Ho! chain -- according to the article, it went bust in 1970, though the buildings hung around for a while after that. (Which is probably why I remember the restaurant being called Michael's.)