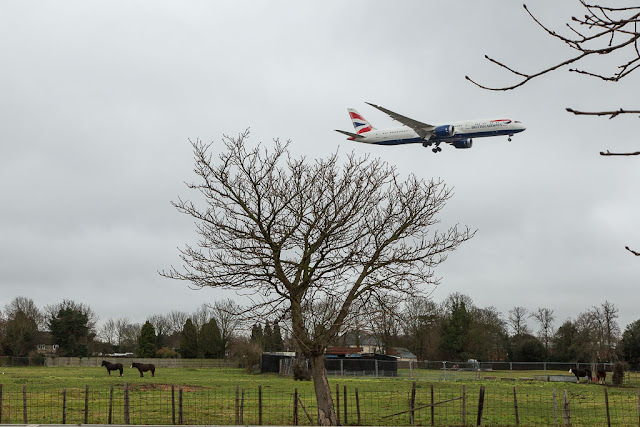 I finally had an opportunity to get back on the LOOP yesterday, walking about five miles from Hatton Cross, near Heathrow Airport, to West Drayton.

The walk did not begin auspiciously. I had some interesting views of incoming aircraft at Heathrow -- some of them were much bigger than this plane, which just happens to be the one I photographed. But as I turned onto the first part of the trail I faced a gigantic, squishy mud-bog which I had to traverse. I was tempted to turn back and wait for a drier day, but I decided to persevere. Fortunately my trusty Merrill walking shoes kept out the water.

I soon came to a fork in the path. My directions at this point were to "follow the small path which ambles through the trees and over a small sleeper bridge." As you can see, there were two bridges -- and I was completely bewildered by which one they meant. Usually the directions for the LOOP are quite clear, but not in this case. I initially chose the right-hand bridge, but before walking any further I read that I was supposed to eventually enter "a large open field." The right-hand path looked very woodsy and I could see hints of a field off to the left, so I changed my mind and went that way instead.

It was the right decision. Whew. (I'm subjecting you to all this detail in case another walker is reading this and needs a heads-up about what to do here. Go left!) 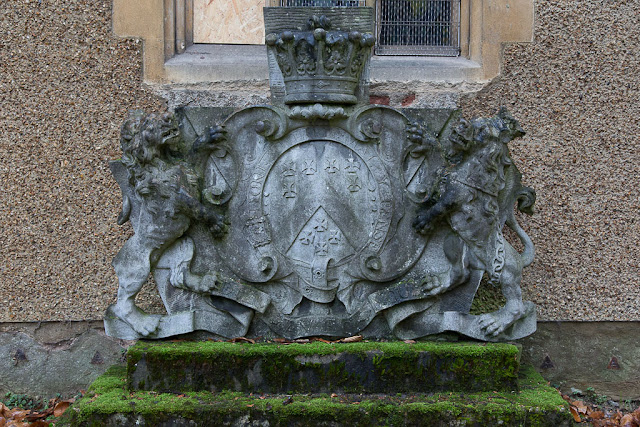 Crossing the field, part of Cranford Park, I came to the 16th century St. Dunstan's Church. The Berkeley family, which lived on this land for 300 years until the end of World War I, installed their coat of arms at the church's east end to claim ownership. 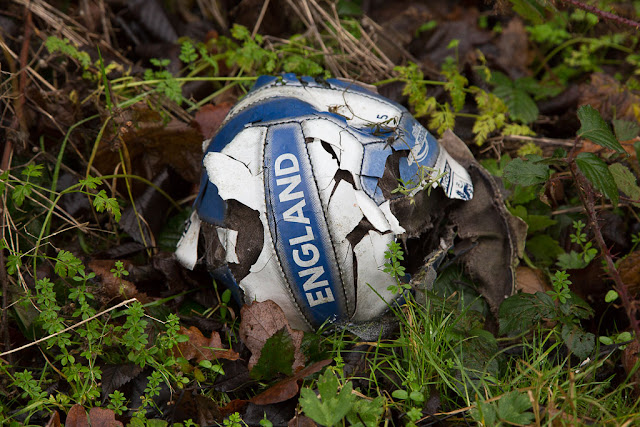 A football for Olga! I don't see how she could do any more damage to this one. 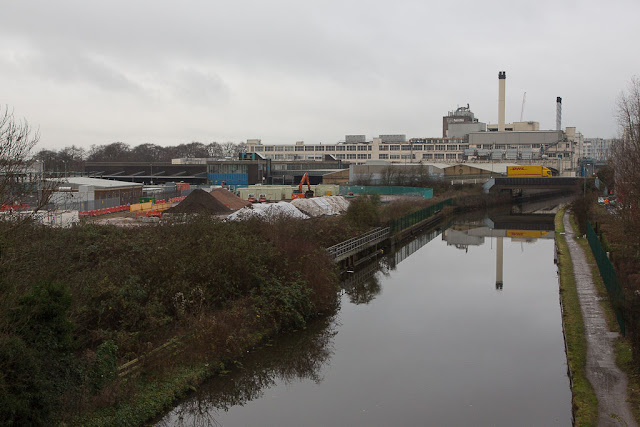 I eventually came to the Grand Union Canal, the same canal where I used to walk Olga when we lived in Notting Hill. The stacks of the Nestle coffee factory were neatly reflected in the water. Almost all of the rest of the path followed the canal's right-hand side. 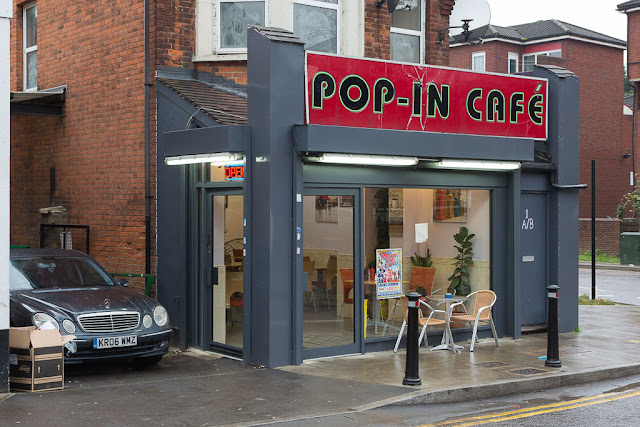 I stopped in the Hayes and Harlington area for a quick bite at this cute cafe -- an excellent vegetarian English breakfast. (A contradiction in terms, I know, but I delude myself that fried potatoes and mushrooms are healthier than fried bacon.) As I took this photo, a man jumped out of a nearby van and unsmilingly quizzed me about what I was doing. I try to be patient with people, I really do, but it annoys the hell out of me when perfect strangers demand that I explain myself for taking a photo -- especially grumpy strangers with no obvious connection to the subject of the picture. "Just a hobby," I said, and walked away.

Anyway, it was a fun walk, despite its wet and rainy beginning, and I'm glad I got in at least one more jaunt before the year's end. (I may manage a bit more walking next week -- we'll see.)
Posted by Steve Reed at 6:48 AM