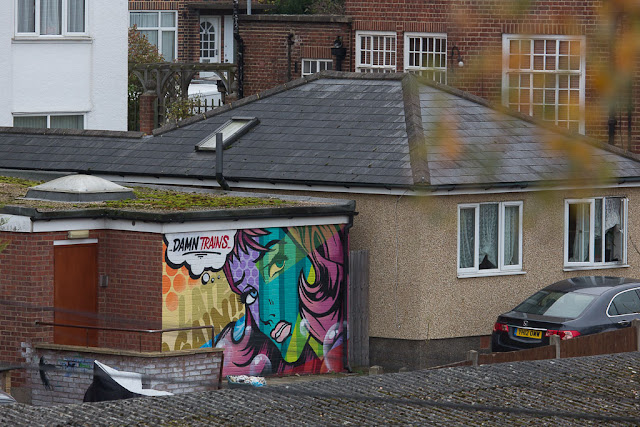 I resumed walking the LOOP on Saturday, taking a train out to Berrylands, where I left off last time. This colorful mural, down in the community below, greeted me on the train platform. 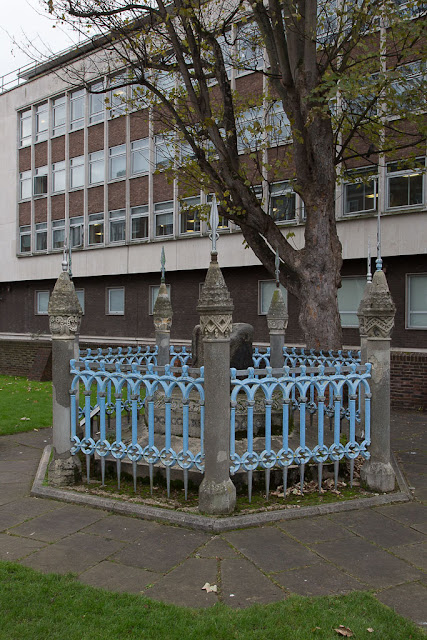 I walked into Kingston-upon-Thames, where I came across the Saxon "Coronation Stone." Supposedly several Saxon rulers, including Ethelred the Unready, were made king here. The stone sits on an impressive plinth adorned with their names in Celtic script, and covered with pennies from superstitious visitors. 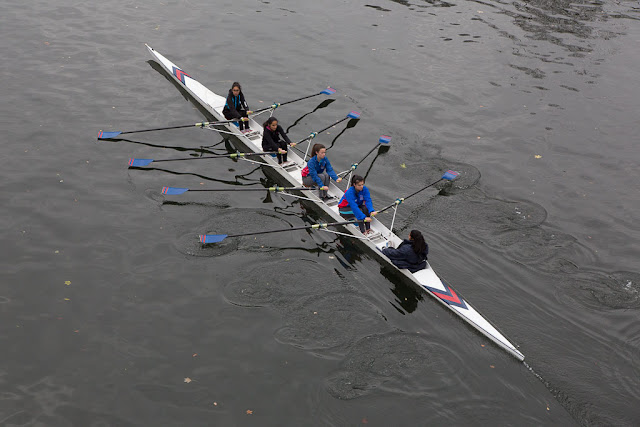 From there the path crossed over the Thames, where these rowers were pulling beneath the bridge. 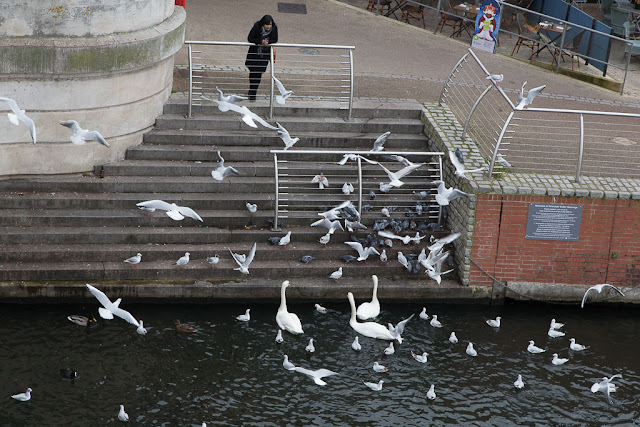 This woman brought some food for the waterbirds. I think she may have gotten more than she bargained for. 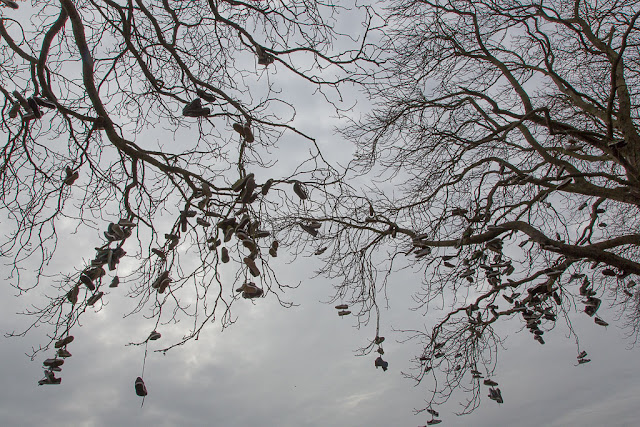 From the river, the path led into the immense Bushy Park. I passed beneath these trees and what I at first thought was a large flock of birds. Then I realized they were actually shoes. That's a lot of shoes! 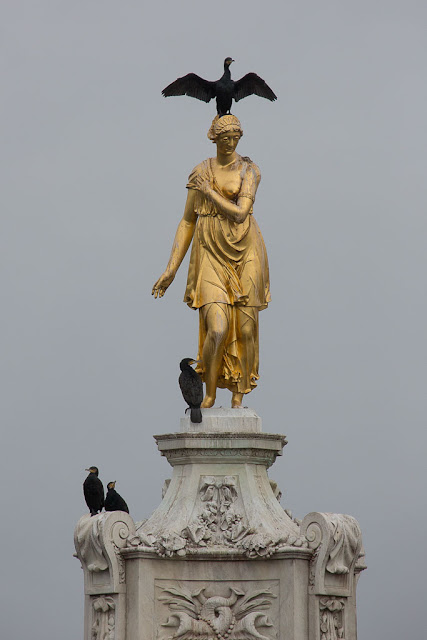 In Bushy Park I made a slight detour to see the Diana Fountain. From the name, I thought it was going to be a memorial to Lady Di, but it's much, much older than that. It dates to 1637, from the reign of King Charles I, and since 1713 it has stood in a circular pond in the center of the park's Chestnut Avenue -- lined with chestnut and lime trees and designed by Sir Christopher Wren, who also produced St. Paul's Cathedral. 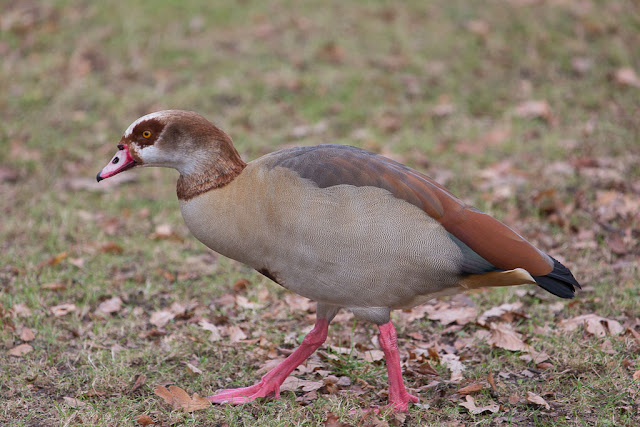 I saw this Egyptian Goose in a nearby wildlife and bird park, along with parakeets, ducks, moorhens and lots of other birds. 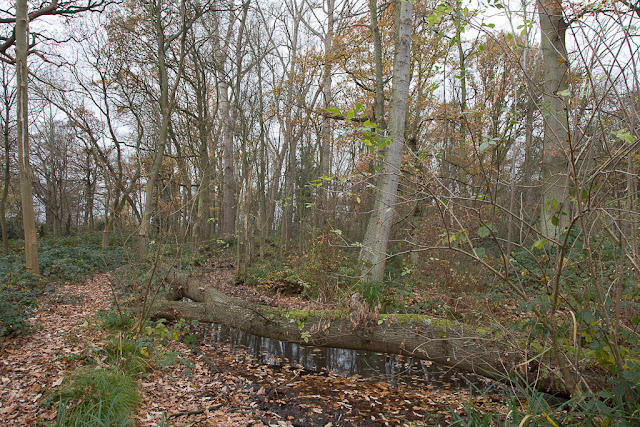 And although many of the pictures I'm showing you depict somewhat urban features, I wanted to include this one -- of a woodland in Bushy Park -- because it more accurately represents the kind of landscapes I was seeing for most of my walk. 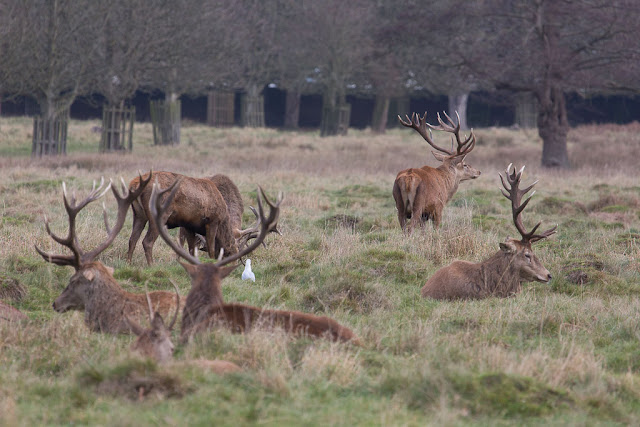 I passed deer lounging in a field in Bushy Park -- but I didn't get very close. (Trusting visitors occasionally get gored by deer in the Royal Parks when they invade their personal space.) 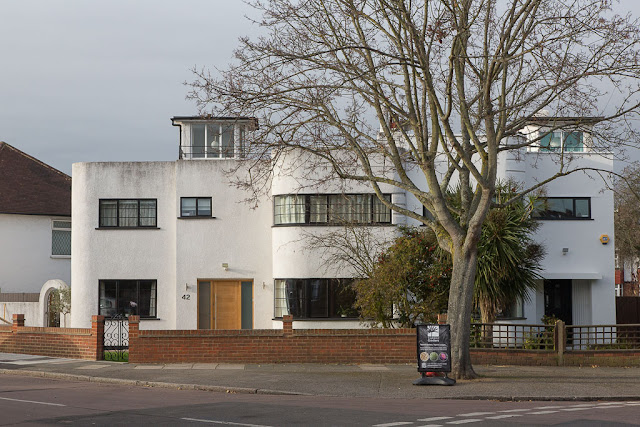 There were many, many more sights, including the River Crane, a small river that I followed for much of the walk, multiple parks (Brazil Mill Wood, Donkey Wood, Hounslow Heath) and some interesting neighborhoods. After walking about ten miles, I finished at Hatton Cross, which is right next to Heathrow Airport. I really enjoyed this segment -- there was a lot to see!
Posted by Steve Reed at 7:21 AM