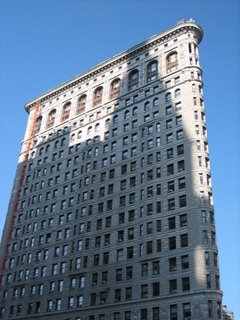 At about 8:30 a.m., the spired Metropolitan Life tower casts a distinctive shadow on the Flatiron Building, across Madison Square Park.

Last night, I went with my friends Jan and Narda to hear the New York Philharmonic play in Central Park. This annual tradition draws thousands of picnickers, who spread their blankets and have wine and cheese as the orchestra plays. Well, this year it turned into a sort of comedy of errors, at least for me.

First, we were going to go to the performance last week, but it was rained out. Then, last night, we found that we couldn't hear much music over all the frat-boy conversation going on around us. The people sitting next to us kept saying "Shhhh!" to the large group sitting next to them, which provoked only sarcastic retorts. Things got a bit tense from time to time. We were just too many baboons in one cage.

Of course, it's not like a concert hall - you don't expect to hear every note, and you're there mostly for atmosphere. But the first two pieces, John Adams' Foxtrot for Orchestra and Prokofiev's Violin Concerto No. 1, were pretty much lost on us. Then the grand finale, Beethoven's Symphony No. 5, was cut short because a rainstorm was on its way. The fireworks that always conclude the show were behind a tree.

And sure enough, as I moved with the herds on the narrow pathways out of Central Park, it began to pour. Almost none of us had an umbrella. But here's the funny thing about rain: Once you stop resisting it, and just accept the fact that you're going to be drenched, it becomes a lot of fun. Yesterday was so hot that the downpour was just refreshing. I rode home on the subway surrounded by hundreds of people, all soaked to the skin and laughing.
Posted by Steve Reed at 10:35 AM