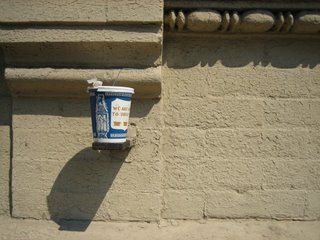 This is the quintessential New York take-out coffee cup: blue and white, with a Greek motif, bearing the words "We are happy to serve you" (whether they really were or not).

I read an article once lamenting the rise of Starbucks and other coffee chains, and speculating that their popularity would eventually mean the demise of this cup. It's so strongly identified with New York that Hollywood props departments order them by the thousands for use in movies.

The cup design has a name - the "Anthora," a corruption of the Greek word amphora. It dates from 1963 or so, and the Greek design was meant to appeal to the many Greek deli and restaurant owners in the city. It's made by the Sherri Cup Co. in Connecticut. There's even a Web site where you can read about its history and buy a ceramic version.

I don't think the Anthora - or its many imitators - is in any danger of going away. I still see them by the thousands in trash cans, on sidewalks, or just abandoned like this one on any convenient flat surface.

(Readers: I will be away from my computer for a few days, so posting will stop until next Wednesday. My apologies, and I'll see you then!)
Posted by Steve Reed at 11:05 AM