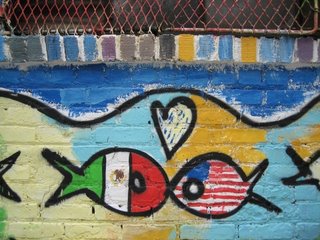 De la Vega is an artist whose chalk drawings frequently appear overnight on the sidewalks of the Upper East Side. When I lived on 90th Street I’d pass them every morning on my way to the subway, little chalk fish exhorting me to “live my dreams” and jump from my confining goldfish bowl into the wide ocean.

Last month I found a mural by de la Vega on East 95th Street, a massive thing including portraits of children and teeming schools of his little fish. I particularly liked these two, bearing the flags of the U.S. and Mexico.

This seems like the perfect image for the Fourth of July, when we’re in the middle of an ugly national debate about immigration. I started to write a long tirade about the xenophobia that I think lurks behind this debate, and how our American spirit of generosity should prevail - how walling off Mexico is not the answer.

But actually, I think de la Vega said it better.