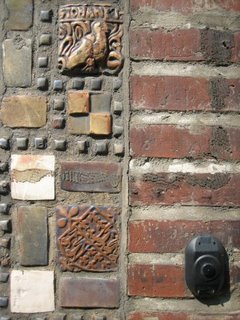 This wall is on W. 72nd Street, near Broadway. Love those tiles!

Last night, as I passed through Grand Central Terminal on my way home from work - a route I don't normally take - I saw a bunch of ads for German economic investment. They featured an apparently nude Claudia Schiffer, wrapped and draped in the German flag. Can you imagine the uproar in the United States if someone here did a similar ad campaign with an American flag? Why are some Americans so obsessed with our flag?

When I got home, the new Crate & Barrel catalog was in my mailbox, and I was amused to see a collage on the front featuring Buddha heads. Turns out, you can get an orange ceramic Buddha head for $14.95, or a silver one for $19.95. Or an Andy Warhol-style Buddha silkscreen in a variety of colors for $9.95. I had no idea Buddha was such a popular decorating accessory. I only hope he brings a bit of dharma into all those homes!
Posted by Steve Reed at 10:35 AM