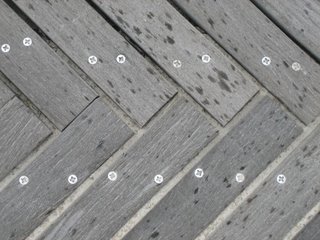 On Saturday, my adventurous friend Rob and I decided to go out to Rockaway Beach, at the farthest end of the longest subway line in the New York system. It took about two hours to get out there, partly because we had to navigate a couple of train changes toward the end of the line. We accidentally took the train east to Far Rockaway, and had to backtrack to get the shuttle to Rockaway Beach. When we finally got there, we found the boardwalk (above). 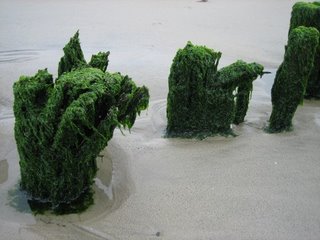 Although the paper said it was going to be "partly cloudy," it was, in fact, totally cloudy. The beach was still busy, though, and I walked on the grayish sand for a bit, photographing these worn pilings, coated with algae and thick clumps of mussels. 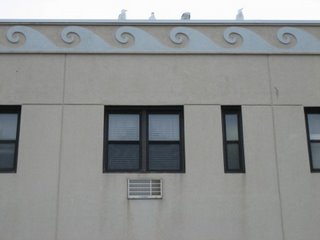 Rockaway Beach has a distinctly down-at-the-heels feel, and a kind of Soviet bleakness, with huge apartment blocks and characterless buildings. It felt like a depressed resort on the Black Sea. (The beachgoers weren't Russians, though - they live farther west, in Brighton Beach.) Many older buildings are boarded up. I liked the frieze on this retirement home, with seagulls perched above the waves. 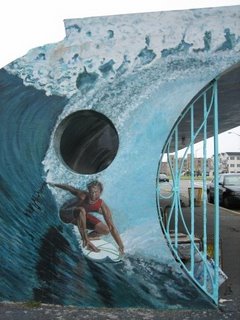 The bus shelters were painted with elaborate murals of divers, ocean creatures and, in this case, surfers.

It was interesting to check out the "end of the line," in subway terms, and view the city skyline, hazy and distant, across Jamaica Bay and Brooklyn. But surprisingly, given that it's beachfront property, Rockaway is a fairly desolate place.
Posted by Steve Reed at 10:40 AM