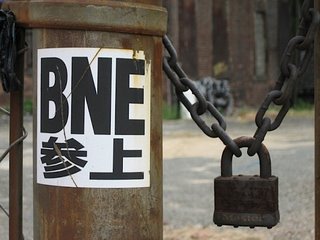 These stickers have been plastered all over New York for many months, and no one seems to know what BNE means. (Except, presumably, the person(s) who did the plastering.) When I first started seeing them, I assumed it was an Asian political party or revolutionary movement.

But according to an article in The New York Times, the Japanese lettering means "visit" or "come to," which seems to suggest some kind of promotion. The stickers have shown up in Tokyo and in San Francisco, where Mayor Gavin Newsome has famously offered a bounty of $2,500 for the perpetrator's arrest. (It's kind of amusing that folks in San Francisco flipped out while in New York no one batted an eye.)

The Internet, meanwhile, is awash in speculation about the meaning of BNE. I've seen suggestions ranging from "Breaking and Entering" to "Be Nice to Everyone."

I think it will turn out to be some kind of Web site or technology venture, and I think there's obviously more than one person behind it. This particular sticker was at Ninth Avenue and 38th Street, but they really are all over Manhattan.
Posted by Steve Reed at 11:25 AM