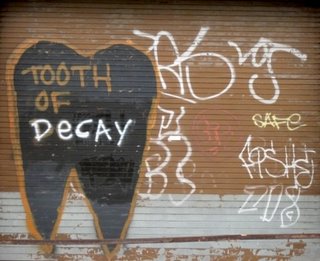 Yesterday I went on a "graffiti walking tour" in Brooklyn, and this was one of the sights we saw. I'm not sure what it means, but I thought it was pretty funny.

The tour was associated with the Conflux Festival and hosted by Jake Dobkin of Streetsy, BlueJake and Gothamist. Armed with a megaphone, Jake and a couple of other guys led our mob on a loop around Williamsburg and pointed out the work of some of the most prominent street artists and taggers. 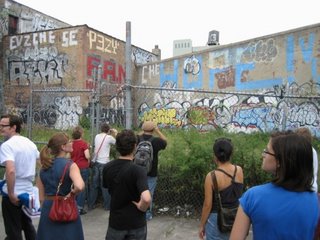 Several times we wound up standing before walls like this one. I learned some new graffiti terminology, such as "fills" (the graffiti with the big, filled-in lettering) and "buffing" (erasing or altering someone else's work). We also talked about graffiti methods, from paint rollers to acid etching to, god forbid, paint-filled fire extinguishers. 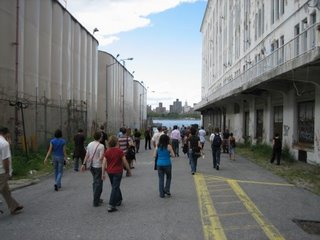 We headed down to the Brooklyn waterfront, which is graffiti heaven, and made our way to the shore of the East River. There, we had an excellent view of Manhattan, as well as of walls like this: 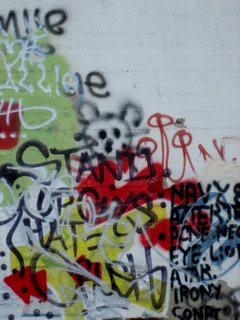 All in all, it was an excellent tour. I learned a lot and took about a bazillion photos, which will no doubt slowly surface here over the next many months. Thanks to Jake and Conflux!
Posted by Steve Reed at 11:08 AM