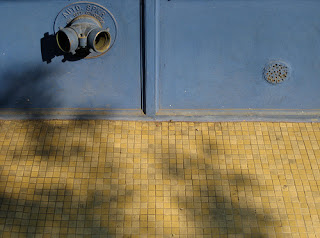 I just heard the other day that Ingmar Bergman died at the end of July. It took me a while to figure out that this must have happened while I was on my Zen sesshin retreat, which is why I had no idea. I was sorry to hear it, as he’s one of my favorite directors.

People think Bergman’s movies are bleak, but I think their austerity is what makes them so beautiful. They’re harsh but honest, with no distracting frills. I like that sense of Scandinavian economy! And they’re never boring, though sometimes it takes a while for me to muster the psychological energy to tackle a Bergman film. I’ve had “Through a Glass Darkly,” “Winter Light” and “The Silence” - collectively known as the Trilogy of Faith - sitting in my Netflix queue for months. I keep moving them down the list.

Another noteworthy recent death: Laurel Burch, a designer most famous for colorful products featuring cats. Right before I went to live in Morocco in 1992, I bought a Laurel Burch mug, and I actually took it with me into the Peace Corps. It was decorated with images of people in colorful costumes and called “Familia del Mundo,” which seemed appropriately Peace Corps-ish.

I was so attached to that mug, having my coffee from it every morning, that my friends used to joke that I’d have to go home if it ever broke.

Fortunately, it never broke. I still have it. In fact, I’m drinking from it now!
Posted by Steve Reed at 11:24 AM