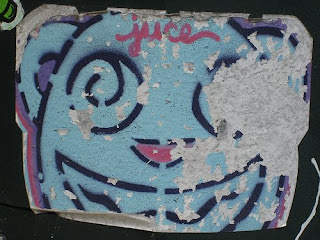 We had a surprise at work yesterday. I was sitting at my desk when a co-worker came over and said, “Someone’s climbing up the outside of the building!”

Sure enough, a French stuntman named Alain Robert was going hand-over-hand up the exterior sunscreen of the skyscraper where I work. We all pressed against the windows, watching him as he ascended. I work on the fifth floor, so he’d barely started at that point -- I eventually went down to the street and watched him as he climbed up to about the 30th floor. Then I went inside, because it was just too scary. He arrived at the 52nd floor not long after and was arrested.

I said to some co-workers, “We’re going to have to make changes to the building, because now that someone’s done it, others will do it again.”

And sure enough, ANOTHER guy climbed the building just a few hours later. He seemed like much more of an amateur, but he made it to the top too. I couldn’t believe it. (I left work right about the time he started his ascent, so I missed that climb.)

The building is screened with panels of ceramic rods. I don’t know how strong they are, or whether they’re really made to withstand the weight of a human being. The news account said one of them cracked as the second climber stepped on it.

If I were a potential climber, I would give this some serious thought. Even someone strong enough to reach the top is climbing a structure that’s simply not meant to be climbed.

At any rate, I hope this doesn’t become a regular occurrence. Not only is it a selfishly dangerous act, but I’ll never get any work done.