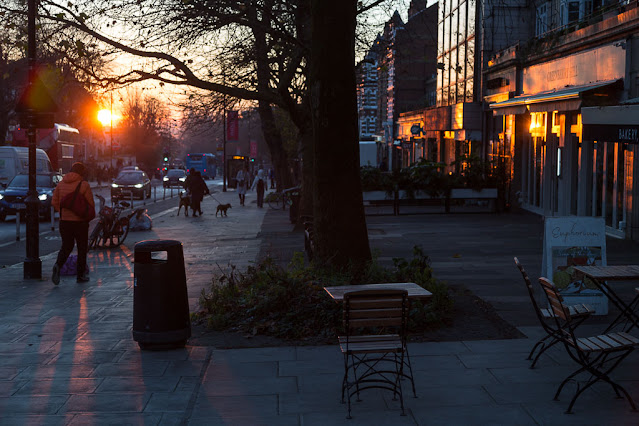 I had to go to the Royal Free hospital yesterday to get some routine blood tests done. My appointment was at 7:40 a.m., and I got there about 15 minutes early to find the testing center wasn't even open yet. I joined a line waiting in the hall and stood there until 7:41, when someone finally managed to open the doors and let us in. From there things went smoothly and I was done in a flash.

I left the hospital and walked to work through Belsize Park, where the sunrise gave the shopfronts an orange glow. 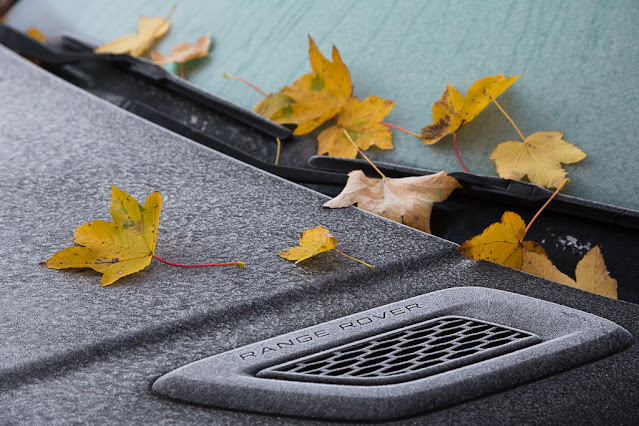 All the parked cars were wearing a layer of ice. I haven't even looked at the garden to see how it's fared during these cold snaps. Our fig tree was looking pretty droopy even before the frost. I should get out there this morning and take some pictures.

Anyway, I got to work at almost my normal time and spent an uneventful day. I read Maia Kobabe's book "Gender Queer," a controversial graphic novel in which Kobabe explains eir experience as a person categorized as female at birth but inhabiting a sort of gender in-between status as a non-binary teen and adult. (Kobabe uses the pronouns e, em, eir.) It was a fascinating, thought-provoking book, said by its publisher to be appropriate for people 16 and over, but some parents in the USA have targeted it partly because of sexual scenes and references. In our library, we're probably going to make it available to older high school students only. (The head librarian is reading it now and then we'll decide.)

I came home in the evening expecting to find Dave, who usually gets home before me, in his recliner as usual. But he had a concert, which I forgot about, so it was just me and the dog and a bowl of chili and "Priscilla, Queen of the Desert." (Which I have seen approximately a thousand times, and that's not enough.)

I was so glad to see that Brittney Griner has been permitted to leave Russia, though I think the guy we traded for her, arms dealer Viktor Bout, is purely evil and this deal could very well come back to bite us in the end. He did serve ten years in prison, at least, so it's not like he went unpunished. I wish we'd gotten the American marine, Paul Whelan, too -- Bout seems like a nefarious enough character that a two-for-one swap shouldn't have been out of the question. Not that I have any idea what it must be like to negotiate a prisoner swap with a rogue state like Russia.

Is that first photo taken on Haverstock Hill? My son used to live in a flat exactly opposite the red tiled tube station.

Global warming has meant we no longer see anything ice covered now. I expect if we did with the lost knowledge, people would pour boiling water over their windscreens.

The Griner woman was so stupid but the penalty very excessive. I wonder if she was just being used as a bargaining tool and I agree with you that it should have been a two for one swap, given Bout's crimes.

I'm fairly certain it was announced earlier that the U.S. proposed a two for one swap to include Whelan but that Russia had declined saying they wanted a two for two swap.

To me anyway, the Whelan case seems a little murky to start with. He was born to British parents in Canada but obtained Irish and U.S. citizenships too at a later point. He arrived in Russia with $80,000 of cash in his pocket to attend a wedding but hadn't been in contact with his family and while the rest of the wedding party was celebrating, he was off on his own. His own family said to the BBC that he often bragged about being close with the FSB. To tag along with what Andrew said above, he was even more stupid than Griner. I suspect that while he might not have worked for the CIA, he was probably dealing information between countries for somebody. Still, none of that should condone Russia's excessive penalties and sham trials.

I was so relieved to see Brittney Griner on her way home. I can’t imagine having to negotiate such a deal.

I love both of today’s photos. So glad we don’t have frost. It dropped to 14C overnight. That was close enough.

The key question is - do you in fact have any blood in your veins or it all martini?

I expect the Russians deliberately took Griner vas a high profile person in order to swap her. But I wonder if they didn't expect Biden to go all out for a black married lesbian. Trump wouldn't have. And it was particularly sweet to retrieve her on the day of the RFM passage. Great theater there.

I love your comment about Priscilla. Ages ago I mentioned feeling a bit guilty about the number of times I'd watched something and a friend saying yes, I felt guilty about it, too, the first seventeen times!

"Priscilla, Queen of the Desert." (Which I have seen approximately a thousand times, and that's not enough.)

Haha! Love it! I feel that way about certain movies too. "Shawshank Redemption" for one.

You're right about the prisoner exchange- one would think that one arms dealer would be enough to exchange for a basketball player and Whelan too but like you said- we have no idea how any of that works.

I wish we'd gotten Whelan out first since he's been there for years, but he's not a famous athlete so .... yeah.

Beautiful morning sunlight there.
Whenever I read the headlines I always wish I lived on a different planet, the one where money and power didn't rule. I wonder what would that look like.

There's a lot behind prisoner swaps that we'll never know. what was the accurate story behind the characters.

Representatives from the state department said they tried desperately to get Whelan on the trade too but it was one or none. The Russians must have something else in mind for Whelan which is a scary thought.
I'm glad I'm not the only one who watches some things over and over again. I love the comfort of knowing the characters and knowing what is going to happen. There is too much uncertainty in the world. I watched "Love Actually" last night for somewhere around the 15th time.

Our favorite movies when Erik was little - Priscilla- rocky horror-and Beetlejuice. we watched them over and over and over. You are correct- can never watch Priscilla enough!
I like that some one came up with better pronouns- e,em eir. They and them is so confusing.

I've never seen that film! From what I understand Whelan's supposed espionage is much more serious than Griner's pot charge. As Ed states, Whelan is also a very shady character who has citizenship in a number of countries, possibly complicating matters even further.

What a beautiful shot, that first photo. And the leaves were mesmerizing, too.

I'm glad they got one of them out but am a little angry it wasn't Whelan who has been there longer (and not for doing something so stupid as to bring something into or out of Russia that would be so obvious and get her nailed.) I feel churlish saying that, but given the guy they let go in her place I agree, two for one should have been the deal. (And I know it was probably impossible.)

I love both photos. From what I have read, you may have quite a cold winter ahead of you. Despite being in the mid 70s now, I think we're supposed to be in the teens within a week or two. I just want to get past the ominous severe weather they're telling us about for next week. 🙄

I'm glad Brittney Griner was released, although as you say, it seems to be a deal with the devil.

The media over here is full of "B.G. is home!" exhults. Meanwhile, as you say, Paul Whelan sits and waits.

I love Priscilla, Queen of the Desert. Shawshank Redemption too.

americans are so hung up about sex and sexual expression which I think causes a lot of warped views about sex and sexual aggression. I blame the puritans and christianity. don't want kids to see naked bodies especially of the opposite sex, no sex education, procreation to happen in the dark under the covers, etc. Creates very unhealthy attitudes.

As for the trade of Bout for Griner, Bout had been retired for 10 years before the US lured him out with a sting operation and he served 10 years and would have been released in a few more anyway so he's 20 years out of the loop. He's not going to start arms dealing again. Russia would not even discuss releasing Whelan so it was Griner or no one. And Whelan was dishonorably discharged from the Marines for lying and theft and accused of espionage (probably not true but ho knows) while Griner is a two time Olympic gold medal winner charged with drug smuggling over the reside in a vape with her MM prescription. I'm appalled at the hate and vitriol towards Griner and the trade which is exactly what Russia wanted, to divide us even more. I bet if she had been a handsome white heterosexual male athlete there would have been no outcry. Anyway, they are still working on Whelan's release.