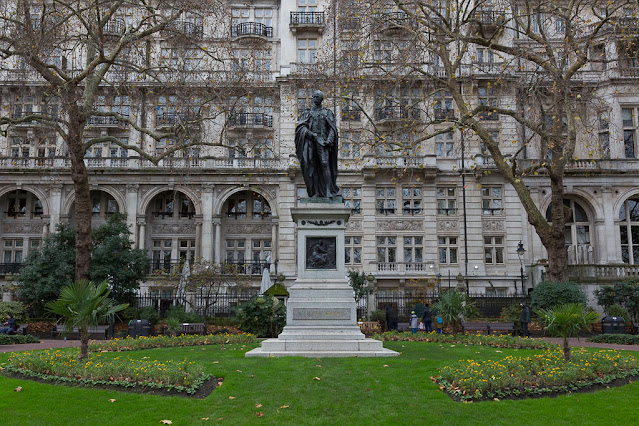 I walked another segment of the Thames Path yesterday, from Westminster all the way to Wapping, in East London. I took so many photos that I'm going to divide the walk into two posts, so today you're just seeing the sights between the Houses of Parliament and the Millennium Bridge, near St. Paul's Cathedral and the Tate Modern.

Above is Whitehall Gardens, a green space along the embankment featuring a statue of Henry Bartle Frere, who was the colonial governor of Bombay in the 1860s and who eventually got into some trouble as high commissioner in South Africa. His decisions there are said to have led to some regional wars and he was recalled to London, where was censured.

I'm not sure why he merits a statue, but it certainly is a grand setting. 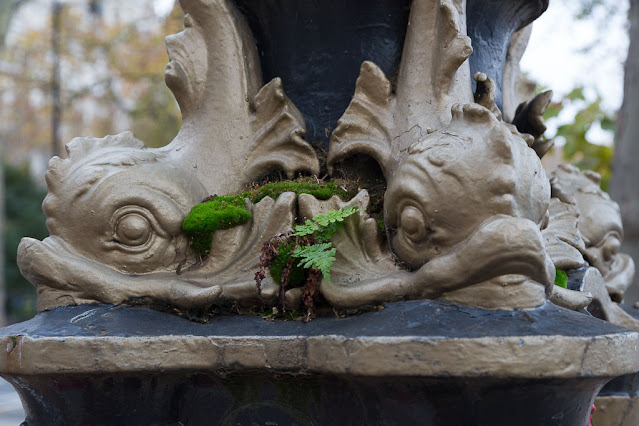 There's a lot of ornate ironwork along the Thames embankment, some of which has been colonized by ferns and mosses. Nature triumphs! 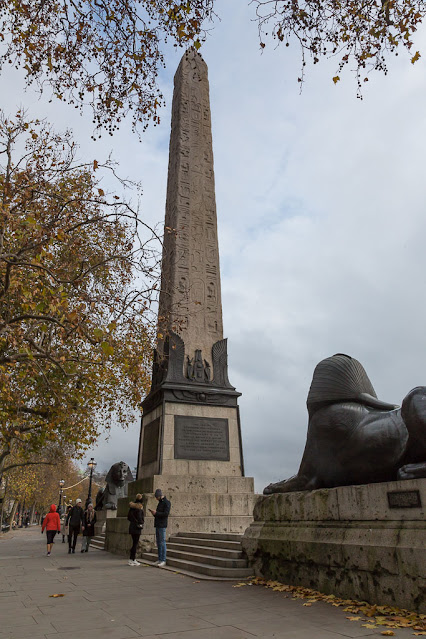 Cleopatra's Needle is an ancient Egyptian obelisk that was transported to London in 1877 and erected along the embankment, guarded by two Victorian sphinxes. It's one of two obelisks that were given away by an Egyptian ruler (the other is behind the Metropolitan Museum of Art in New York). At least some Egyptian officials now want them back.

I've seen the one in New York but weirdly, I don't think I ever photographed it in its entirety. This photo shows part of its base. (I was more focused on the magnolias.) 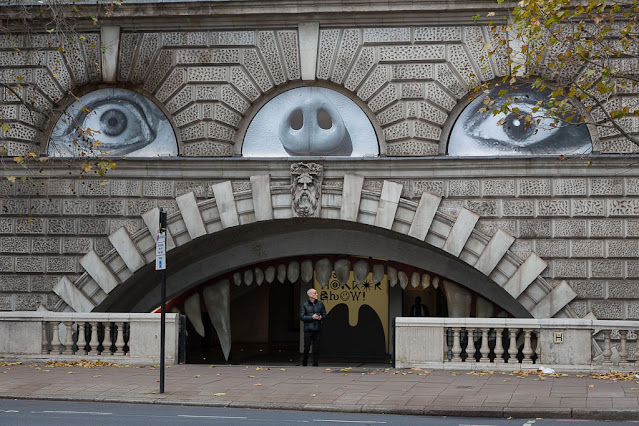 Look out behind you!

This is the entrance to something called The Horror Show at Somerset House. 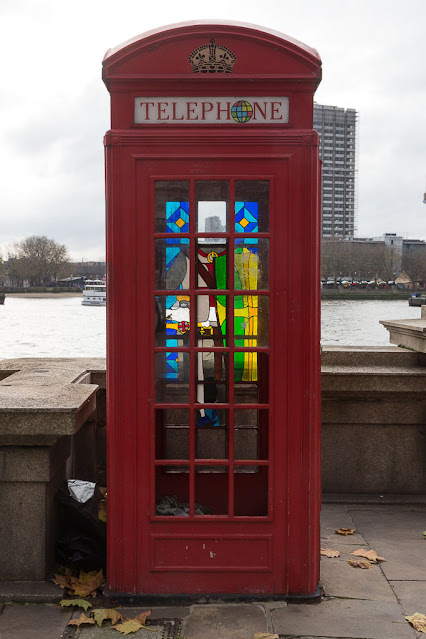 I was intrigued by this phone box with a stained glass window! It was real stained glass, too, with leading and everything. Unfortunately parts of it have been broken out (of course, because we can't have nice things). Here's what it looked like soon after it mysteriously appeared in 2019. The image of a knight apparently relates to the Knights Templar, for whom this part of London (the Temple) is named. 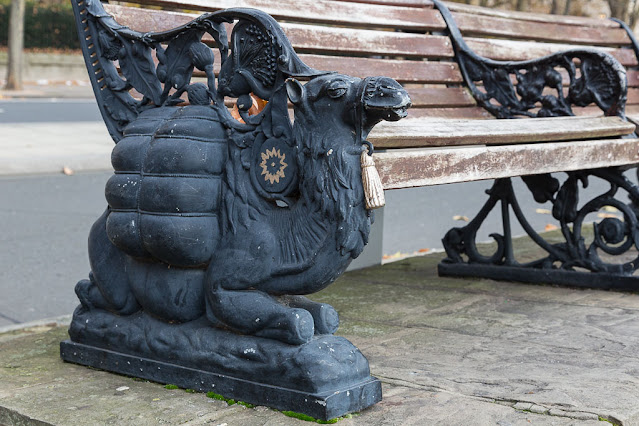 More fancy ironwork. I'd seen benches with sphinxes on them before, but I'd never noticed benches featuring camels! 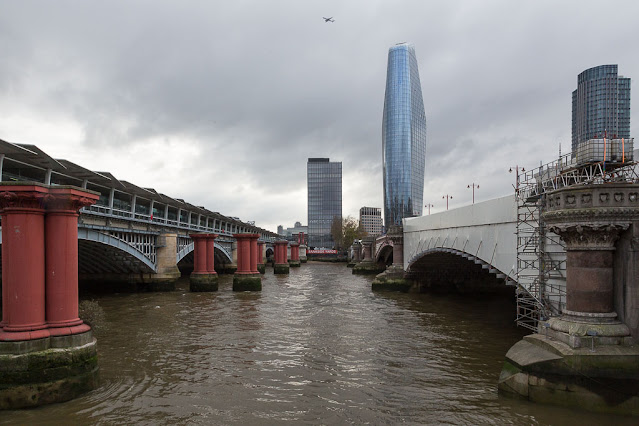 A view of the river between the Blackfriars Bridge (R) and the rail bridge leading to Blackfriars station. 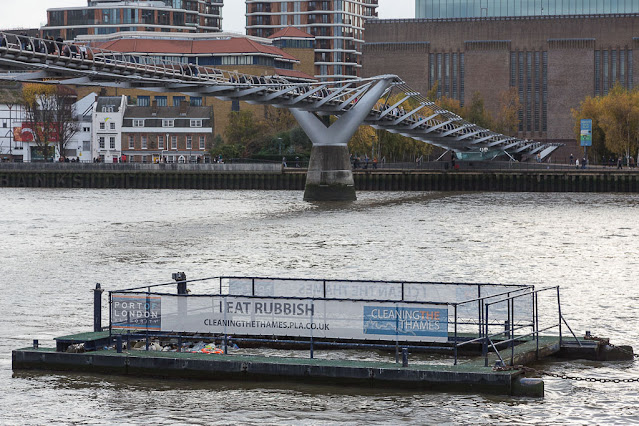 And finally, Millennium Bridge with the Tate Modern museum in the background. I was curious about the barge labeled "I Eat Rubbish." It seems to be something meant to trap floating trash, and it has indeed done so. It's part of a Thames cleanup effort being coordinated by the Port of London Authority.

Tomorrow, we'll continue on to Wapping!
Posted by Steve Reed at 8:00 AM

You see so many details. It was a grey day but at least it looks dry. Looking forward to Part Two of "Walking With Steve". Maybe it could be a TV show. You just need a hungry TV producer to visit this blog and you'll be famous!

I would have a whopping good time on this walk. I need that camel bench.

I'm impressed at the details you see on your walks. And the history. I wonder if the obelisks. will ever be returned. And the so called Elgin Marbles, named for the tealeaf!

I wish we'd stay at that phase where things like benches were works of art.

Does it take you forever when you go for these walks? All the noticing of details and photo taking - do you stop and go and stop and go all of the time? It is amazing all of the interesting links you have given us to further explain what you have seen. You are a great teacher, Steve!

What a great walk, Steve. You do see the most interesting things there. Walking around London is so different from walking around a small town here in northern California. I love it!

I love these photos. I don't recall seeing the statue of Henry before but I do recall Cleopatra's Needle. I like the idea of 'eating the garbage'. I hope it continues to work.
It looks like a kind of gray day in London just like it is here right now. It rained all day yesterday and more rain today. Not your usual Arizona weather.

I know that "exotic" is not the correct word but to my eyes- these sights ARE exotic in the sense that they would not be seen around here. Terrific shots!
I have to tell you that I do believe the camel benches are my favorite.

I love all the decorative iron along the way. Modern times no longer incorporate art. A loss and a shame.

I have stood right there at Cleopatra's Needle. It was not far from where we saw 'The Play That Goes Wrong'. That was such a fun night.

I love to see the city through your eyes, more fun and interesting than any tourist guide. Love the garbage eater but the camel bench is the winner this time around!

I missed out on so much on my visits to London so it's wonderful to see it through your eyes. Amazing phone booth!

Interesting walk that leaves you with many questions about the things you see.

I love all the details you see! My favorite is the camels. Well, I also really like the rubbish eater - excellent concept!

The camel bench for the win! London has so much cool stuff to look at. Eye candy abounds.

So many interesting things to see here! I love the stained glass!

If the obelisk was given to England by Egypt (did I understand that correctly?), I don't see why they'd want it back. It was a gift! (as opposed to something like the Elgin Marbles and other artifacts that were removed by the "finders") That would be like France saying they want back the Statue of Liberty!

Perhaps he didn't have the right to give them away?
A good walk, interest at every turn!

But sad, vandalism and litter too.

You and your photos and your blog have singlehandedly made me desire to once again visit London, to see it with adult eyes, leaving behind the child and teen who vowed never to step foot there again. I am a different person now. I believe this time, I will see and appreciate different things. Thank you for inspiring me to gently reopen a door once slammed shut. I wonder what awaits me on that side of the pond, this time.

Familiar spectacular walk- your long legs cover a lot of ground! I never noticed the camel benches- great to see them. Ahhh, I do miss London- I could not love your posts more!!
Isn't a gift a gift? Cleo's needle should stay where it is- as well as the Art in the British museum. Why not...it is relatively safe there and more obtainable to a vast array of people.
No one has the correct answer to this dilemma.
Thank you for the grand walk!

Almost any walk in London is bound to be interesting and of course this walk was. I'd heard of Cleopatra's Needle but I never knew what it is or where it is.

Our museums over here, as you well know, are chock full of Egyptian artifacts. I'm not surprised that they want some of them back. I also have not seen any American artifacts overseas either. Perhaps the Egyptians should send a crew over to plunder some of our burial grounds and remedy that fact.

That phone box was brave. I am surprised it has lasted this long.
A shame we need things to eat rubbish in our rivers but a great idea nonetheless.

Lovely photos. That statue, I don't get it. The man screwed up, caused wars, deaths and basically got fired from his job and sent home, so let's put up a statue of him. Why?

The park is beautiful though.

So many beautiful old buildings and bridges. I like the rubbish eating barge. The camel supported seat is interesting.

YP: It was a gray day, but as you know, if you wait for sunshine in England in the winter you'll never get anything done!

Mitchell: That would be a WAPPING good time. :)

Boud: I think the Elgin marbles are a higher priority!

Bob: It is a shame that the level of artistry we used to see in civic buildings and "street furniture" has declined so much in the name of saving money.

Ellen D: I do stop and go a lot, but I walk fast so that makes up for my stopping. I think I did this whole stretch in about three hours? Glad you enjoyed the background info!

Robin: Urban areas definitely hold a lot of surprises! So many people up to so much creative mischief, I suppose...

Sharon: The statue of Henry is a bit tucked away behind government buildings between Whitehall and the embankment. I don't think I'd ever seen it before.

Ms Moon: I love those benches too! I especially like the way someone has painted them with a bit of gold ornamentation.

Ellen: It could be argued that they do artfully incorporate modernity and clean lines, but yeah, we don't see details like that ironwork much anymore.

Debby: Yes! It's close to the theater district.

Margaret: Well, it's impossible to see everything. There's plenty that I've still not seen.

Red: It's fun to do a bit of research and learn about all these public sights.

Bug: It's a good idea, but it seems to me it needs to be much larger to work effectively! Maybe there's more than one?

Kelly: It was supposedly a gift. https://www.rmg.co.uk/stories/topics/cleopatras-needle
But I'm sure it could be argued that they're still a symbol of European colonialism in that part of the world.

GZ: Well, exactly. He was the Sultan, but does even the ruler have the right to give away priceless cultural antiquities?

37P: Are you definitely visiting?! If so we have to meet up! Not only are you a different person, but London is a different city.

Linda Sue: I do worry that art that is repatriated from western museums will wind up being looted or lost or sold. But I suppose each culture has the right to care for their own artworks as well or as badly as they wish.

Andrew: I'm not sure I realized the London one is the twin of the one in New York. Funny that I've seen them both!

Ed: Ha! You definitely drive home the impact of the looting. I think artifacts that were a gift might arguably be kept, but certainly things that were simply taken must be given back.

Merlot: I only wish I'd seen it when it was whole.

Pixie: I know! Isn't that weird? The Victorians did seem to think they could do no wrong, though.

River: Every street seems to have something interesting going on, certainly in central London. (Maybe not in the suburbs!)

Golly! when I first looked, I thought the horror house was the base of Cleopatra's needle and I was having a hard time wrapping my brain around that! All set now! I love following you on your walks -- you see the best and most unique stuff!