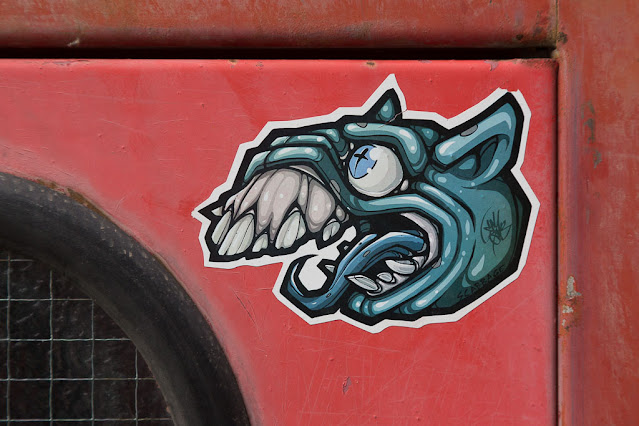 Here's another sticker I found while wandering in the city. Olga on a bad day?

We're supposed to get slammed by some nasty cold weather this week. Tonight will dip down to freezing, and the next week or so will bring low temperatures in the 20s F (anywhere from 0 to -4 C). Supposedly this is due to cold air coming in from Greenland.

So after I write this post and the sun comes up, I have to bring in the geraniums and the Amistad sage, and put the canna lilies in the shed. I already brought in the cursed plectranthus, which for some reason I can't bring myself to allow to die. I'll cover the banana and the tree fern. Everything else ought to be OK with the cold, I think.

I like bringing in the plants. It gives me a cozy feeling to know they're protected behind double windows in our living room as winter descends outside. Apparently we might even get some snow early next week.

Dave's high school band winter concert was Sunday. (I say Dave's, but there are actually three band instructors who all share duties across middle and high school, so it's a group effort.) It was a bit rockier -- not in the rock n' roll sense, but in the performance sense -- than in previous years. Even my unskilled ear could tell a few things weren't right. I think these kids were set back by the pandemic, when they were essentially deprived of a couple of years of ensemble playing, and haven't yet come up to speed. I went to dinner with Dave and his fellow teachers afterwards and everyone agreed it was one of their less successful concerts.

But, you know, the kids still benefitted (and hopefully learned) from the experience, and parents don't care if things run a little off the rails as long as they can watch Jimmy and Susie perform. 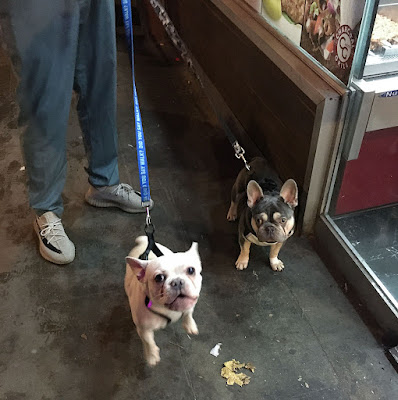 Since I'm on a dog theme -- at least in terms blog photos -- here are two cute French bulldogs I met on my walk home last night. The white one was not amused that I was taking its picture. I violated one of the prime rules of news reporting in failing to get the dogs' names, but at least you have their wall-eyed little faces. The owner asked if I had a dog, and I said yes, a distant (and definitely less posh) relative of these two!
Posted by Steve Reed at 6:52 AM

As a seasoned listener of many a children's concert, I sometimes think that perhaps it was the song selections or that the calendar conspired against them and they didn't have as many days of practice as last year. But I still treasure the music just the same.

The cold has already started in this house....15.5c in the kitchen when I came down! P has had a fiddle with the boiler and the radiators are now heating up. Plumber coming this afternoon!

I really used to prefer it when the plants went out in summer and I got the living space back. It was like kids going to camp, and so much easier to water just with a hose, no carrying. But since the demise of the old cherry tree, not enough shade, so they're indoor plants now, except for the ficus which handles sun pretty well. I do like to know they're protected though, yes.

"The Cursed Plectranthus" by Stephen Reed... The story of a possessed white bulldog that our intrepid hero met outside a kebab shop in west London. "I knew I shouldn't have reached down to pat his head and now I am his slave". How will Ronald J. Hump shrug off Plectranthus's death spell? ...Soon to become a blockbuster "movie" on Amazon Prime.

My cousin has a thing for French bull dogs and has two rescues. She can’t pass one on the street without bending down to pet it. I had no idea getting dog’s names was a prime rule of reporting. Good to know.

I won’t complain that it’s only 14C here right now.

What does it matter if the kids were not perfect there's great enjoyment from playing instruments. Every child should be given the chance to try out various instruments but sadly there aren't. Music lifts the spirits no matter how badly you play, here's an expert speaking, I play piano, ukulele and guitar but not for anyone else's ears. lol
Briony
x

I've had my potted rosemary and thyme in the garage for a bit but now even that is dipping below freezing at least at night. They're hardy but not that hardy. Seems like whenever I bring them in, they slowly begin to die no matter how well I care for them. But I'll try!

I so wish I'd kept up with piano and my voice is completely shot now. Meanwhile, Rick practices his guitar several hours a day. Makes a dif! Those kids may one day fall back into the habit!

Oh, I think Olga is just as posh as these two hooligans! 😀

Olga NOT posh? I feel offended for your beautiful girl! I think you owe her an apology and a treat!

I knew a couple who had French bulldogs a few years ago but they moved to California so I don't see them anymore.
I know that academics have suffered after the pandemic but I hadn't thought of music lessons. I can see where that might be a more difficult adjustment, especially the collaboration part of it.

I am meanwhile sitting here in Florida wondering if we're going to get any winter at all. This is ridiculous. It's supposed to get up to almost 80 F here today. People are running their AC's!
Those little doggos are adorable.

It's clear and cold here too on the California north coast, literally freezing. It's been like that for a few days. It's going to warm up with some rainy weather headed our way.
The impact of Covid on young people has been pretty profound. I've been reading articles about students and classroom behavior and academics. I can't begin to imagine what it must be like for them.
Olga is the Queen of doggies.

Did you see where the man who shot Lady Gaga's dog walker (so he could steal her two French Bulldogs) got 14 years in prison? The dog walker survived, and she got the dogs back. What a crazy world!

Kids here also lost ground from the pandemic shutdowns and online schooling and of course the republicans are somehow blaming Biden when the shut downs happened under Trump.

Once my plants are in for the winter, even when the temps rise back up into the 70s and even 80s this week except for the two staghorn ferns. I lug them in and out. One id small and easily carried, the other is very big and I won't be able to heft it for very much longer I don't think. It will be a problem when it gets to that point.

I think yesterday will test the hardiness of the box woods we planted. One was completely buried in ice and show. There is no shaking or raking to get it off. This winter has been very different than last year. I guess global warming is on hold here.

Bite your tongue. Olga is as posh as posh gets! And you're right, parents don't care one whit about performances going off the rails. We're all still coming back from the pandemic.

I burst out laughing at your comment about Olga and the sticker. Even on a bad day, surely she couldn't look that fierce!

It's currently 74F (23C) here with 79% humidity! Supposedly, though, it's supposed to get quite cold in the next week or so. We'll see. Hopefully y'all will have nice weather in FL.

French bulldogs are not a popular breed here but this pair look quite cute.

Snow and cold, ugh, I'm over it here. Hope you don't get too much! I'm a firm believer in the value of music and playing an instrument or singing, no matter what. Both my daughters played piano, violin and sang in the orchestra.

Olga is nobility. Frenchies are a dime a dozen - or at least they are where I live. And Olga can breathe.
Children performing is always delightful.

Oh dear. If Olga hears you telling people she is not posh, she is very likely to snarl a bit...like the first picture.