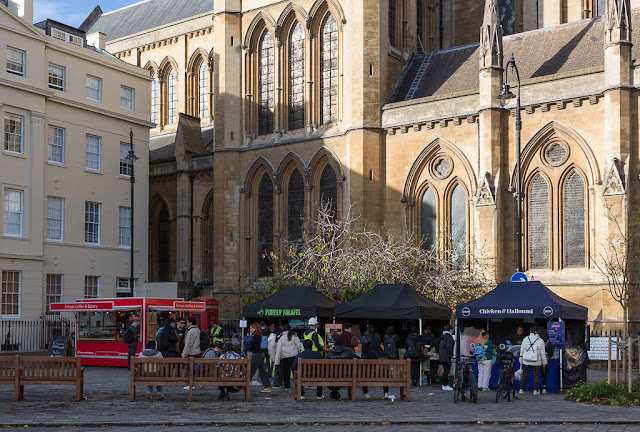 Dave got his neurologist's report back yesterday. He already knew the results based on his conversations with the doctor (as I mentioned a few days ago). But he got a kick out of the report because it went into a lot more detail. He sent it to me in an e-mail and said, "I have a 'boat-shaped' head and an extra spleen!"

Have you ever heard of a "splenunculus"? I hadn't either. Apparently it's a small amount of splenic tissue found outside the normal spleen, also known as an "accessory spleen." They're not uncommon, and Dave has one. (Leave it to him to have a fancy accessory.)

The doctor also noted that Dave's head is "scaphocephalic," another word I'd never heard. It basically means a skull that's longer and narrower than usual, having something to do with the way a baby's skull plates are fused. I Googled up some images and darned if Dave doesn't have a scaphocephalic head. I always thought it was just a little peculiar, not a medical condition. Who knew?!

I love him anyway. I have kind of a weirdly-shaped head myself, so I can identify. (Mine isn't scaphocephalic. It's just big. Big enough that in grade school I was known as "egghead" and/or "peanut head.")

If Dave and I had a child, it might look like the creature in the "Alien" movies. 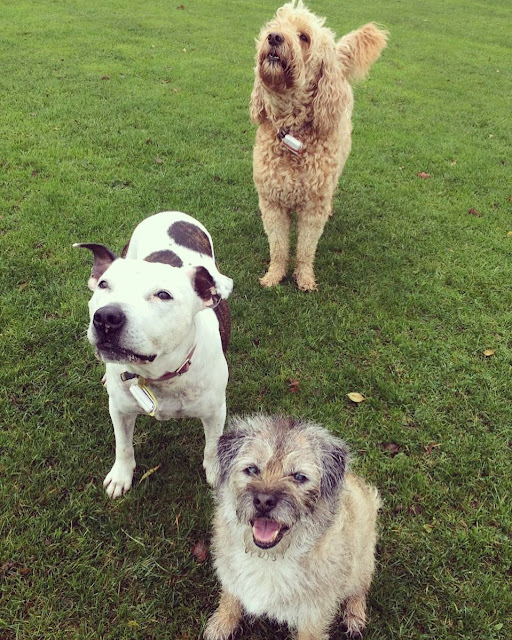 Here's a photo posted to Facebook by our dog-walker, showing Olga and some of her companions clearly waiting for a treat. It's nice to see that she plays well with others. Or at least doesn't gnaw their ears off. (Olga has only had one scuffle with another dog on her walks that we're aware of, and it resulted in Olga's ear being injured. She's not very fierce.)

I'm not sure what's on Olga's collar. Looks like a little spool of dog-poo bags, but why would each dog need one? I think it might actually be something like a GPS locator in case one of them runs off. Anyway, it's nice to see evidence that she really IS out of the house and having fun during the day.

(Top photo: Some food trucks on Byng Place near University College London.)
Posted by Steve Reed at 7:09 AM

In an attempt to increase my self confidence about my appearance, my father called me Pinhead. Time and tide has looked after than rather more than I would like.

The dog walker may have photo-shopped that picture. In reality, Olga is probably put in a dank cellar with a treadmill and a bone. Have a good day at work with the other eggheads. Aren't all librarians eggheads?

well, isn't Dave special- extra spleen, boat shaped head, better looking than most humans and he has a good dog and an egghead husband. Life is good for the man!
I love the photo of the dog party. Olga is such a lucky girl.
Thank you for the physiological lesson. I learned a new thing.

I had never heard of scaphocephaly or splenunculus. Dave sure is special. I think each of the dogs has their own poop bag holder because the dog walker has trained them to scoop it themselves.

He's not alone. In 1997 in a routine CT of my stomach area, they discovered that I too have an accessory Spleen.

Careful what you do here, because with so many folks desperate for a new accessory, the "splenunculus" might become a trend!

Huh. Well, leave it to medical science to tell us we are special. And you never know- Dave may need an extra spleen some day. I hope not, but if he does, there it is.
Olga- what a darling. It IS good to see her with other dogs, having a good time outdoors with them.

Well isn't Dave extra! I love it. I myself have a little head which I think looks weird on my body, but most everybody has something they think is weird.

Olga's such a good girl!

A mean boy in my neighborhood called me "Ellen the elephant" and "Ellie with the big fat belly" when I was a kid and he was fatter than me! (I am talking to you Jimmy Witt in case you are reading this!) Wouldn't that be funny if he was?
Hope Dave gets his meds sorted. Interesting lab news!?!

I have an extra lung lobe which always causes doctors much concern whenever I get a chest x-ray. Fortunately I haven't got a chest x-ray in a long time so I haven't had to set them straight.

Imagine having a backup spleen, just in case. Whatever a spleen does, I'm not sure. Anyway I'm glad there's nothing more ominous going on with him.

We never know what's going on inside our own bodies, do we? It takes all kinds of modern-day medical devices to show us these wildly interesting things. Now I'm wondering what a head that isn't weirdly shaped would look like. I think we all have weird heads, but probably not an accessory spleen. Love seeing Olga out on her walk.

Interesting report on Dave and the irregular head shape. It would be interesting to know if this shape caused something else like greater intelligence?

Amazing how many variation of the human body there are that survive. My uterus is 'retroverted and retrograde' which means it tips backwards toward my spine instead of toward my abdomen.

It's nice to have confirmation that each of us is special in our own way. Olga looks like she's part of the gang in that photo and she is so patiently waiting for her treat.
That church makes a nice backdrop for those food trucks.

This was a fun post! I learned two new words today! I love smiling dogs and Olga is a favorite.

Look at Olga and her friends! 😃

My brother is a pathologist and he's always said the human body often has irregularities that would never cause any health problems. He could probably tell some good autopsy stories! (that might be TMI)

What a delightful photo of Olga and her companions! Smiling, happy dogs are guaranteed to brighten any day.
Have a wonderful weekend!

The doggies look SO happy! I'd never heard of that head shape either; I have a big head but also have lots of hair. A good combination.

Those dogs look so happy. I love that you have a dog walker for Olga. We watched a 60 Minutes last night that had a segment on how dogs became the way they are. It's due to a genetic mutation on a gene that predisposes dogs to be friendly. Humans with Williams syndrome have the same mutation.

Dave and I have so much in common, I have an extra spleen too. Two spleens for the price of one:)

And who could resist a man with a boat shaped head.

Well, I'm reading backwards (thanks for coming by, by the way!) so ALL this is new to me. I can't even pronounce those! I hope they just mean he's unique -- no problems there. The dogs look great. Their heads are all different too! Much to catch up on here!

Andrew: Sometimes when we're kids things look a little out of proportion. Time usually corrects that!

Linda Sue: You just never know what weird knowledge you'll come across on any given day, do you?! LOL

Mitchell: Now that's something I would LOVE to train Olga to do.

John: We say it to each other, but maybe I say it less on the blog. :)

Dov: I've read that something like 30 percent of people have one.

Bob: The new must-have from Balenciaga!

Ms Moon: Well, I wonder. If the body creates one, maybe it IS a way to build some redundancy into the system. Though if you injured your spleen back in the old days I think you were a goner. There's a lot of bleeding associated with a ruptured spleen.

Bug: I think a lot of the things that we perceive as "weird" about ourselves are things other people don't even notice!

Ellen D: Well, that's a clear case of trying to minimize his own problems by exaggerating them in others!

Ed: Wow. I've never heard of an extra lung lobe. I think that must be less common than an accessory spleen!

Boud: I'm not entirely sure either, but I think it has something to do with blood storage and recycling and also immunity.

Robin: It's true! Heads are pretty weird in general!

Red: I'm sure he would say so! LOL

Ellen: I guess as long as everything basically works we survive to pass on those genes. This is how evolution happens, right? If a retrograde uterus was advantageous in some way eventually, over many generations, every woman would have one.

Sharon: It's funny how attentive dogs become when you start flashing treats around. LOL

Debby: Glad I could boost your vocabulary! LOL

Kelly: My stepsister is a pathologist too, so I've heard similar stories! They can be quite entertaining.

Damselfly: It would be a lot of work to be a dog-walker, but the upside is keeping company like that. :)

Margaret: Hair conceals a multitude of faults. Some of us have to just live with ours out in the open!

Allison: Oh, THAT's interesting. I'll have to read more about Williams syndrome. If it makes people and animals more friendly maybe we all need that mutation!

Pixie: He keeps saying, "But why BOAT-shaped?" It does seem like a weird description.