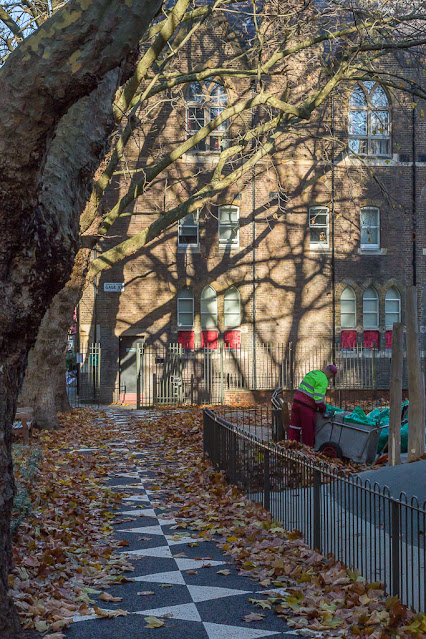 This poor guy has a lot of leaves to manage! I came across him yesterday, sweeping up the Alf Barrett Playground off Old Gloucester Street. I was there around lunchtime following up on a medical appointment, and Dave was at the doctor yesterday too. The joys of aging!

My appointment involved a CT scan, which I hadn't done before as an adult. I've been trying to get at the cause of my chronic cough, so I finally just paid for a scan privately to make sure nothing nefarious is going on in my lungs. In all likelihood, I'm dealing with gastro-esophageal reflux (GERD, or as it's known in England, GORD, because the British insist on spelling esophagus with an O in front). But better safe than sorry.

The scan involved being injected with an iodine contrast medium, which was a peculiar experience. It's like having an intense hot flash. But it passes quickly, and the scan itself was over in moments. I spent a lot more time sitting around preparing for the scan and then afterwards, while they made sure I didn't have an allergic reaction to the medium, than I did actually being scanned.

The results take a few days to process but I'm not too worried. It's more a precaution than anything. 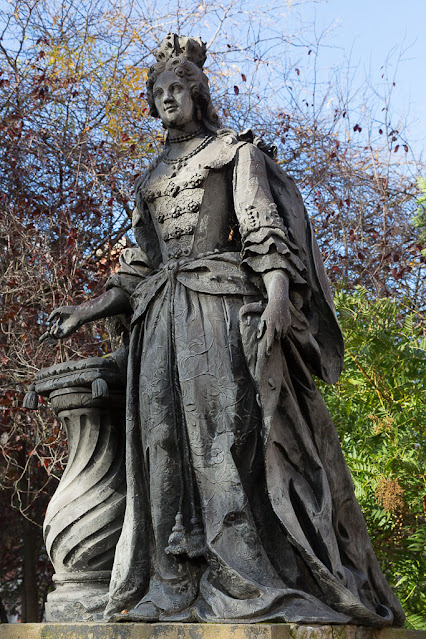 Afterwards I took a quick walk around Queen Square, where this rather imposing statue of Queen Charlotte of Mecklenburg-Strelitz holds court. She was the wife of "Mad" King George III and the grandmother of Queen Victoria.

Dave, meanwhile, had an appointment with his neurologist to follow up on the results of his spinal tap. You may recall he's been having hand tremors. The spinal tap showed inflammation, but the theory is it's caused by his Crohn's Disease, and the neurologist thinks Dave may have developed some resistance to his Crohn's medication. He's going to recommend that Dave's gastrologists consider another med. We'll see if that goes anywhere.

I've been telling Dave it would be better if the spinal tap found nothing than if it found something, but he disagrees. I think he just wants an answer. "I want a grapefruit-sized benign tumor that they can just take out," he said.

We don't always get what we want. Thank goodness. 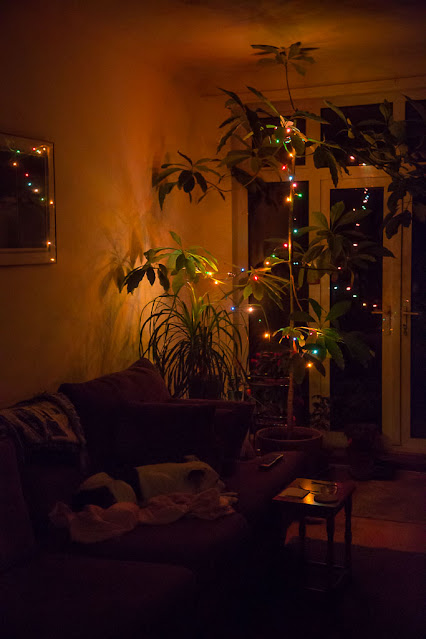 Back home again, the holidays have arrived with the annual tradition of stringing Christmas lights on our avocado tree. The avocado is so big now that we probably need a second strand!
Posted by Steve Reed at 6:57 AM

There are some machines now that blow leaves along a path and out onto the street, thus making them someone else's problem.

I've had the CT scan. It is a weird but not really unpleasant feeling when the dye takes effect.

Is there family history for Dave of hand tremors? They are something I know oh so well about.

You decorated tree looks rather good.

I’ve had GERD since I was around 30. Fortunately, all it takes is a change of diet for me. I fell off the wagon in recent years, my former doctor immediately gave me meds, which turned out to not only be dangerous but also were less effective. I changed my diet back. No problem. For me, carbs are the worst offender. There are others, but just lowering starchy carbs makes all the difference. Potatoes and bread especially.

But if you try sometimes, well, you might find, you get what you need

You might have to cut a hole in the ceiling for the avocado tree!! It looks very pretty.

How could the school library possibly function without you? And there you are swanning about taking pictures of guys sweeping up leaves and statues of queens in squares - while your library colleagues are freaking out because you're not there.

That contrast dye always makes me vomit. Every single time. I'm glad you handled it better than me! I sure hope it's just GERD or GORD.

Your avocado tree is so pretty with the lights! We strung fairy lights on our ficus, and also put our regular tree up on Sunday afternoon.

I'm kinda with Dave. I'd take the removable tumor over no explanation.

Your avocado tree is impressive! Yes, a 2nd strand of lights might be in the works!
Tuesday morning in S. Colorado and it is snowing!
I am scheduled for a lung CT scan on December1st. My new doctor just wants to make sure everything is OK in there!

Just talking about these things makes me anxious.
I hope all is well for you both.

I'm curious why they didn't just do a chest x-ray to check your lungs, way less radiation. CT scans are what I do. I start the IVs for patients, screen the patients and deal with any allergic reactions that occur, at least I used to. Now I sit at home:)

Hope you get only good answers.

I'm kinda with Dave though I wouldn't want a tumor that has to be removed.

That iodine stuff is what I think they injected when I had a stress test in 2017. I do not like being injected with weird stuff. I think I may be having cataract surgery next year. I'll find out in January.

Hope you both get easy answers from your doctors. It is always a bit worrisome.
Love you tree!

I hope you and Dave find answers with very easy interventions.
That avocado tree is really, really TALL!

I like most things about getting older except for the health issues. Those I could do without.

The contrast dye is now on my doctor's official list of can't do that again, after it stopped my lungs from working. And the test showed nothing to worry about.

Which I hope yours does too. Look out, they may ban martinis, spirits often causing GERD. It's always something!

There are so many joys of aging....NOT. I hope everything checks out okay and you get satisfactory answers.
That statue is wonderful. Very realistic. Good for you for getting the holiday lights up. You beat me. I still haven't gotten the few things I decorate with out.

The one time I had a CT scan it had something to do with my uterus and for some reason my bladder had to be full and that was the worst part of the whole situation. Man. Makes me want to go to the bathroom even now! Well, I hope that if they DO see anything it's easily fixable, but I tend to agree with you. My GERD has me clearing my throat & speaking with a raspy voice pretty frequently.

Medical issues are a worry. But I will inform you that you guys aren't old! That should take a load off your mind.

I felt like I was peeing my pants when I had my first ever CT. Unnerving. My cough is finally going away after weeks. It's been a trial, especially for sleeping. I'm glad that Dave's news was good although I understand his need to have definitive answers. The word tumor strikes terror into me!

I Tend To Reference The Automobile With My Clients And Those Analogies Often Stick - Your Car Needs An Oil Change, The Timing Belt Should Be Replaced, Etc - So Good On You Both For Adding Some Preventive Maintenance To Your Routine - However, Best Photo Ever - Olga Girl Steals The Show Once Again

"Old age ain't for sissies." I'm not sure that's exactly what she said, but Bette Davis was right! (at least I think it was Bette Davis who said that...)

I love seeing Ogla basking in the light of the avocado tree. ☺️

Hoping for the best for you two.

We're starting to fall apart a little around the edges as well, if it isn't one thing it's the other .. fortunately nothing major but yes, health is everything and getting older makes me a little more apprehensive that something worse might come along. It's a good idea to stay on top of things!

It would be good if the hand tremors could not be a big hairy deal. Did they do a chest x-ray of you? I'd have to agree with Pixie on that one. My hacking cough comes and goes, more often goes. Love the decorated tree.

Covid left me with a cough that hung around for ever. Add GERD/GORD into the mix and I sounded like a 60 a day smoker.

I hope you both get the results you need (maybe without the grapefruit).

I am guessing Queen Charlotte didn't do anything that requires her statue to be vandalised.

I will always covet your avocado and Ed's asparagus. I am green with envy.

Your Christmas lights are very pretty, no need for a second strand, less is more as they say, whoever "they" are.

Andrew: No family history of tremors, which is what makes this so weird!

Mitchell: I will keep that in mind! I think the main offenders for me are probably alcohol and coffee, particularly the coffee where I work.

Frances: Yeah, it's definitely about as tall as it can get! I'm leaving that little sprig on top for one more year outside.

Jennifer: Wow! They asked if I'd had any reaction in the past but I'd never had the procedure so I couldn't be sure how I'd respond. Fortunately it did nothing aside from make me feel hot.

Bob: Not having an answer is very frustrating for him. But as I've told him, at least we know what it's NOT, and in most cases we can be happy about that.

Ms Moon: It's funny, I had no anxiety about it at all. Even if it DOES find something I feel like it's better to know.

Pixie: I did have an x-ray, in the spring, but x-rays miss about 20 percent of lung cancers according to one study I read. CT scans are better screeners, but obviously more expensive.

Ellen D: Thanks! We've decorated this tree for Christmas for several years now.

Robin: It's getting so big we have trouble getting it in and out of the house every year! I may have to resort to leaving it outside and trying to cover it.

Boud: Martinis are definitely out, at least for the time being!

Sharon: Even hanging that one strand of lights tests my patience! LOL

John: I'm not too worried, to be honest. I feel like it's always better to know whether something is going on or not.

Bug: My test documents mentioned that in some cases scans had to be done with a full bladder. I figured that would be due mostly to bladder issues -- wonder why having a full bladder would help a uterus scan?

Margaret: Tumor is a scary word, no doubt! I was warned before the scan that it might feel like I was "wetting myself," but that I wasn't -- so I knew to expect that.

Padre: Sometimes we all need a tune-up!

Kelly: Whoever said it, it's definitely true. (Not that I will cop to being officially old -- not yet. :) )

J&B: Well, that's the thing. Anything can happen at any time, but staying on top of things ensures that if it DOES happen there's a better chance of fighting it.

Allison: They did do an x-ray, but there's a feeling that x-rays may be inadequate for screening such symptoms.

Merlot: Well, she probably did, but we don't know about it!

Debby: I am at a loss to explain why our avocado has done so well!

I'm with you on Dave's tests. I agree and understand the wanting SOMETHING in the sense that it can be fixed. But sometimes SOMETHING can't be fixed. I'd go with what one has -- gratefully.