The Pavilion and More 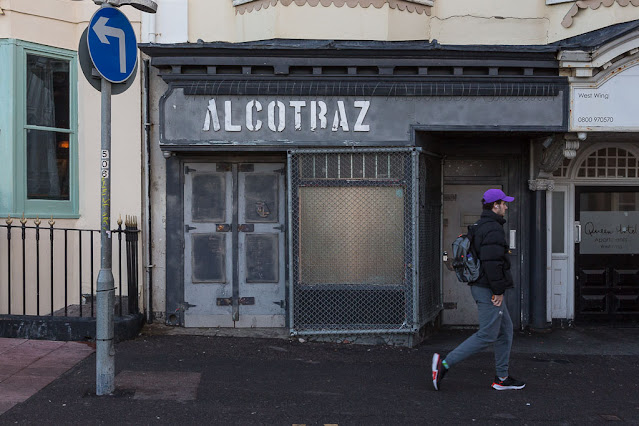 I've just been wrestling with our ridiculous in-room espresso maker, which was designed more to look elegant than to be of any actual use. I managed to eke out a thimbleful of coffee with the consistency and taste of an oil slick. I think I'll wait until we go out to get the real stuff.

Yesterday's weather turned out to be very pleasant, thank goodness, and we did quite a bit. We wandered around town in the morning and took in the somewhat artsy, colorful vibe. Brighton has a lots of brightly painted street art and quirky buildings that look like they've suffered for their long exposure to the sea air. Not to mention gigantic, pterodactyl-like seagulls. 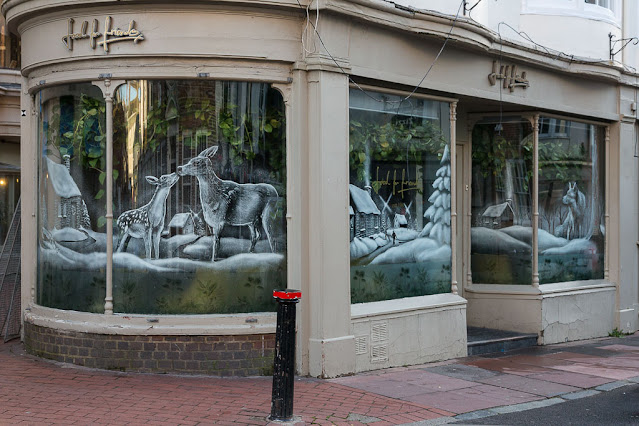 Here's a little restaurant with some very detailed stenciled "snow windows" by this outfit. 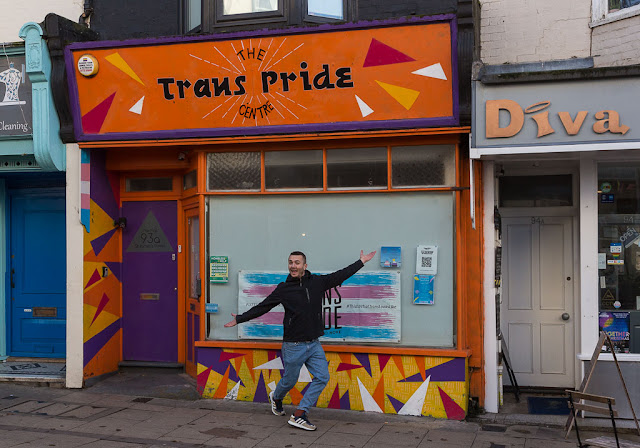 Brighton has a reputation as the gayest place in England, and there are lots of LGBTQ+ establishments and rainbow flags flying everywhere. (Just as I took this photo a passerby decided to involve himself in the picture.) 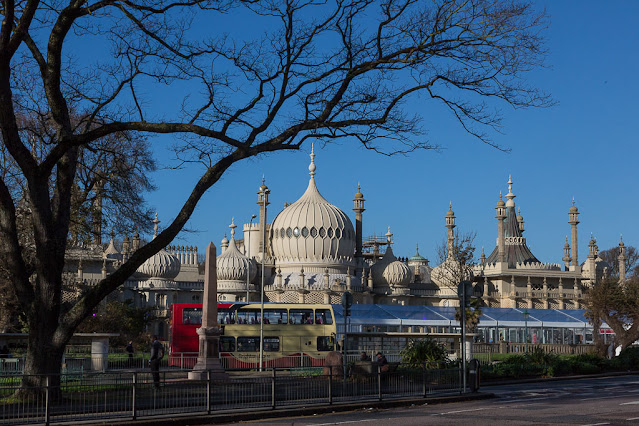 I visited the Brighton Pavilion while Dave sat on a nearby park bench and babysat Olga. The building -- which you're seeing here across a park and a bus seating area (admittedly not the most aesthetic perspective, but a truthful one) -- was begun in 1787 and expanded by architect John Nash in 1815 for the prince who would eventually become King George IV. He used the building as his seaside pleasure retreat, but after he died and the throne eventually passed to Queen Victoria, she decided to sell it to the city of Brighton. She felt the pavilion was too small for her family and attendants and she didn't enjoy the urban location and lack of privacy. 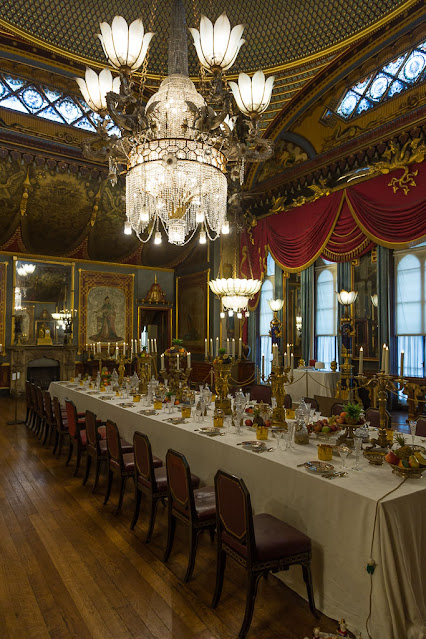 It is quite grand inside, though Victoria had some of the original fixtures and fittings taken away to Buckingham Palace, where they remain. 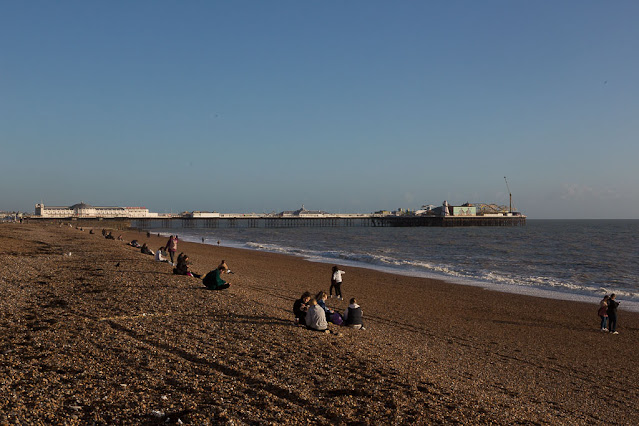 Dave didn't really want to see the pavilion, so we went for lunch on the seaside promenade and enjoyed the sunshine. Even Olga -- who gets antsy when we travel, being out of her familiar routines -- calmed down while lying in the sun and gnawing her tennis ball. 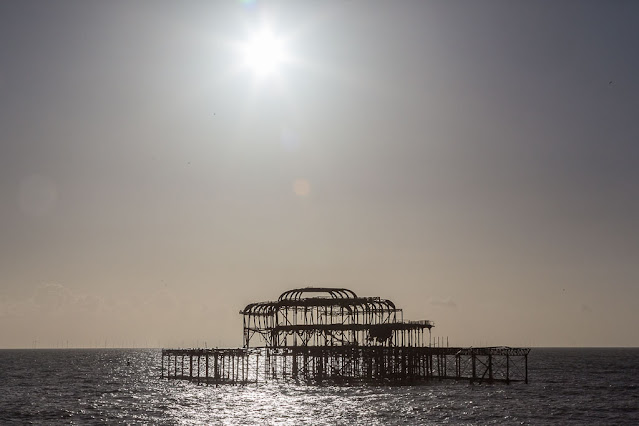 We were sitting near the old ruined West Pier, which closed to the public in 1975 and has been through a series of fires and collapses since then. It's basically just a skeleton of girders, rising from English Channel.

Last night we went to dinner at a place recommended by a co-worker of Dave's, called The Set. You get a pre-selected menu (wine pairings are available) and it was delicious, very much focused on rich, meaty and umami textures and flavors. The portions are very small -- bite-sized in many cases -- but they pack a punch. I usually like a nice salad and we didn't get that here, but I still enjoyed the restaurant a lot.

Another day of Brighton awaits!
Posted by Steve Reed at 7:32 AM

Glad you had a better day. Have never tried The Set, but it sounds interesting. You might like Burnt Orange too. Hope you have a good time today. The rain should stay away until late afternoon, she says hopefully.

That photo at the Trans Pride has made my day. I haven’t been to Brighton in 26 years.

I wondered if the skeleton pier was Brighton Pier when I saw it. I was relieved to find it is isn't.

The first and third pictures are very Reedesque. The fellow in the third photo probably owns the shop next door - "Diva"! Nice to know that you did get good weather yesterday.

It's been a long time since I've seen a snow stenciled shop window (or any window at all). That used to be so popular in my Northern Indiana youth.

I love your passerby and his pose!
But I was thinking ... leave it to a royal, yes, Vicky, I'm talking to you, to SELL the Pavilion but then ransack it of furnishings for one of her many other homes.

The Set would be quite the experience in curious dining! Thanks for letting us tag along on this get-away!

Quite the seaside cottage! Hoo-boy!
Well, looks and sounds like a lot of fun.
Every town should have a Trans Pride Centre.

I love your photo of the West Pier - it makes the ruined girders look beautiful.
No wonder some of the people of England think the Royals are a waste of money. I am sure Brighton is glad the fancy Pavilion is theirs.

I love the day you had there in Brighton. Looks like such a wonderful place for long walks... beaches, castles, and gay pride centers. Great photos.

I had the same thought as Bob. She SOLD it?

I'm glad you had a good day! I started a new book yesterday & the main character is getting ready to move away from Brighton. I had the ridiculous thought that maybe you would run into each other. Ha!

That Pavilion is pretty crazy looking, exotic like being transported to Russia. (not sure where the domes come from since I haven't clicked the link yet) Glad you got some sunshine and good food! There's nothing more frustrating than a mysterious coffee maker. In New York, I fought with a Keurig which I eventually figured out. I'd never used one before and was very confused. With no coffee shops nearby, it was imperative to get it working! LOL

I love all these photos but especially the last one. The sunlight on the water and on the skeleton makes such a moody scene.
I'm now thinking that the tent-like room in front of the pavilion must be some holiday thing. Perhaps the pavilion is used for parties at this time of year.
Your dinner sounds very interesting and tasty.

I'm learning a lot about Brighton. And I didn't know V sold the pavilion instead of giving it to the town. But then she referred to her subjects as "the mob" sure they were all assassins.

HAHA what Boud said!
Beautiful holiday even though the weather is less than sunny perfect! At least the town is not mobbed by "the mob"...

Allison & I took the train down to Brighton from London when we were there over Christmas very early in our marriage. We went to London because we were pretty pissed off at our respective parents' behavior at the time. Your weather is better than what we had. Brighton has grown a lot in the years since we were there. Glad you are enjoying your visit. PS: Surprised the pier is still there.

We honeymooned in a large circle around London to visit some of the famous gardens but left the coast 'for next' time. I think Brighton goes on the list!

Good to know Olga has settled in and is enjoying her trip to the seaside. We took one of ours on his first holiday away this week.

I've enjoyed catching up with your posts.

I can't imagine anything worse than a restaurant with a set menu, I'm a picky eater, but I'll take your word that the food was good.

What a waste of money, building that pavilion, money to burn. I guess some things don't change. Now they building penis shaped rockets (I'm looking at you Jeff Bezos).

Fran: It's so funny you mentioned Burnt Orange! We tried to go there but we couldn't get a reservation, so we settled instead for The Salt Room which is apparently the same ownership.

Mitchell: That guy really made the pic! I wish I could send him a copy!

Andrew: Manchester is apparently very gay, which is to be expected of a large city, I suppose. That's where "Queer as Folk" took place.

YP: I loved that "Diva" sign creeping into the image!

Colette: I don't think I've seen any with this much detail!

Bob: Yeah, taking the furniture was kind of a shit thing to do, but apparently some of it got returned in later years. Maybe she didn't have room for it at Buckingham!

Marcia: It was curious. Dave didn't love it, strangely, because he's usually the meat eater in our relationship. But he found the portions too small, among other things.

Ms Moon: I agree! And clearly the guy in the picture does too!

Ellen D: It's certainly a landmark and attracts a lot of visitors, but it must cost a fortune to keep up.

Robin: A little of everything, right?!

Mitchell (again): Well, I guess technically the government sold it, for £53,000, according to Wikipedia. But it was done by her decree, in 1850. (So the town has owned it much longer than the royals did.)

Bug: THAT's funny! What a coincidence!

Margaret: It is definitely a challenge to get through the morning with no coffee, before we get outside to a coffee shop. At home I make it the minute I get up!

Sharon: The "tent-like room" is actually a series of bus shelters, I think. But I didn't take a close look.

Boud: Yes! Apparently the "mobs" in Brighton were part of what drove her away. She decided to spend summers on the quieter Isle of Wight instead.

Linda Sue: I think we're part of the mob, actually!

Jim: Cool that you've been here before and have those memories, even if the weather didn't cooperate! The Palace Pier (I think it's called) is still open for business. But yeah, I'm surprised the West Pier hasn't been scrapped or completely disintegrated by now.

James and Brigitta: Brighton is well worth a visit, overall. It's a cute town and there's lots to see and do.

Kelly: I think she's partly enjoying it and partly wants to be back in the security of home! (Kind of like all of us when we travel, I guess.)

Pixie: And they're very emphatic about it, too. They specify that the menu is unchangeable and they can't accommodate dietary restrictions. What you see is what you get. As for the pavilion, at least now the public gets to enjoy it.

Can only shake my head...the Pavilion was too small for the Queen and her entourage. Pretty fancy.

I would have enjoyed that meal, also fancy.