A Massage and a View 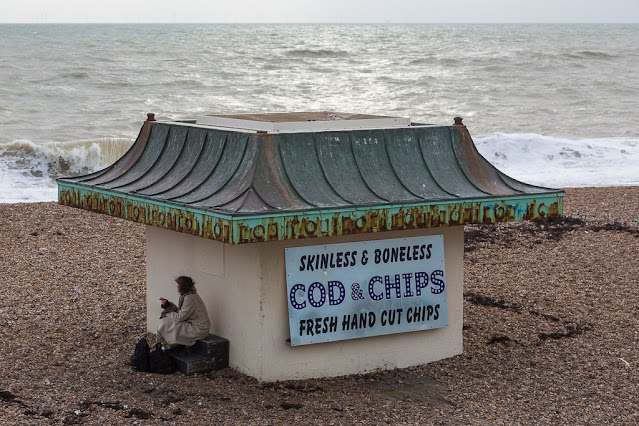 Yesterday began moderately sunny, but gradually deteriorated into gray skies and, last night, rain. It's raining now hard enough that Olga wouldn't go outside, even after enthusiastically clambering down the hotel stairs. Rainwater was blowing in beneath the front doors, puddling the entrance foyer. This is a very blustery town in November.

We did get a walk yesterday morning, when Dave and I went out to find coffee and breakfast, and Olga tagged along. Then I got a massage, which was fantastic. The hotel where we're staying is also a spa, and although the spa facilities are apparently closed for renovation, you wouldn't know it. When I went downstairs for my massage there were treatment rooms and everything looked very professional. I haven't had a massage in years -- certainly since the pandemic, and even quite a while before that -- so I was long overdue.

Afterwards I went out for lunch with Olga while Dave, not feeling well, stayed and rested in the room. We went to a pub in town where I had mac n' cheese and a pint, and then we walked back along the seafront. 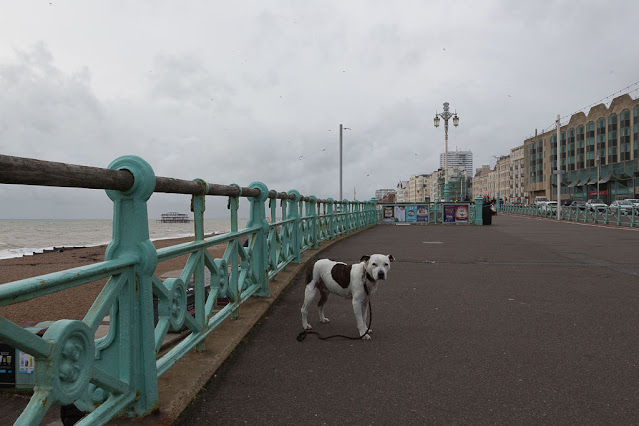 You can see the weather beginning to turn, and Olga's mood turning to match.

When I got back to the room I finished "Great Expectations." Woo hoo! Another Dickens down! Despite all the serious themes he really is quite a humorous writer -- at one point he said a girl's head resembled the mop she was carrying. He likened another character's mouth to a letter-box, and later mentioned as an aside that same character "putting fish into the post-office." Funny!

In the afternoon, we went out to the Brighton i360, the tall donut-on-a-stick I mentioned a few days ago. I erroneously called it a "rotating cocktail bar" -- turns out it doesn't rotate, but you can have a drink while you walk around inside the glass pod. It rises 450 feet above the beach and you get a good view eastward to the Seven Sisters and westward toward Bognor Regis.


Here's a little video so you can pretend you were there. The white hotel that I zoom in on at the very end is where we're staying. Olga was in that building at that very moment -- kind of a strange thought.

After indulging in the views, we went to Costa for some coffee and Dave happened to mention that while he was there a couple of months ago on a daylong school trip, he left behind his water bottle. So while he ordered our coffee I went to the lost & found in the adjacent theater and darned if they didn't have it! Dave couldn't believe it. He said he wouldn't have even thought to ask -- but working in a school I have become an expert at reuniting people with their lost possessions, as you know. 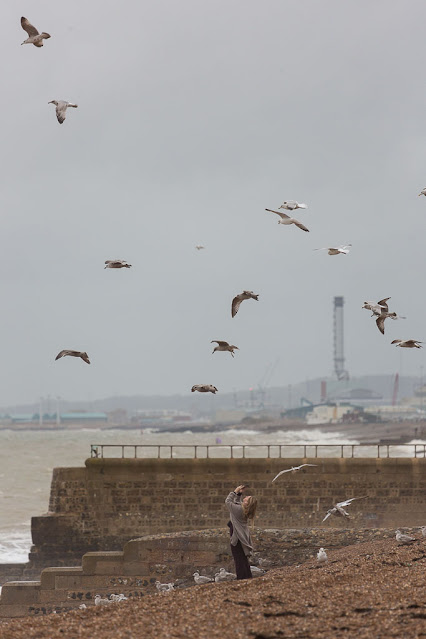 Last night we had dinner at a very good seafood place called The Salt Room, where Dave was convinced our mustachioed waiter was faking his French accent. He was indeed very zis and zat. "It's just over the top," Dave said. The food was great, though.

Today we're headed back to London. Hopefully the rain won't be too miserable by the time we leave our hotel. We're planning to walk to the train station, and if the rain's pelting down Olga may put up a fight!
Posted by Steve Reed at 6:43 AM

The Salt Room is very good. Thanks for the video - I still haven't been up the i360 although I walk past it all the time. Seems like you made the most of your weekend despite the weather. Take a taxi to the station. It's wild out there!

Great views. I love the sudsy froth where the sea meets the sand and that pastel multi-coloured roof.

Great video from the i360. Reminds me of when we went up the CN Tower in Toronto. I could feel it moving!!
Good advice from Fran above....just looked at my "Rain Today" app and you have got rain for ages in Brighton!.

Thanks for the video. I would love that place. Great views and a great space. If I ever get back to Brighton, I might try that hotel. I love the look and location. I never would have thought to check the lost & found. You are something else. That’s a little bit of magic.

I think I remember seeing Brighton i360 in 2019. I've seen similar in Singapore and I think it did rotate.

Olga looks so far out of her territory.

I gather a massage without a happy ending.

I've tried reading Dickens, but I could proceed at all.

Bognor Regis? A must visit place?

It sounds like you had a good enough time away, and then isn't it nice to get home and appreciate your own place.

Two things: I amazed that Olga, with her leash out of your hand in that horrid weather, didn't turn and run back to the hotel. That's one trained dog you have there.
And 2: I love the Brighton i360,but that one guy, leaning on the railing on his phone? Why??? There's a cool view and you're totally missing it!

I love the video! I had no idea Brighton was such a large town. It's so cool looking down on the soaring birds, looking like paper airplanes drifting over everything.

Gray skies and high wind, not very inviting beach weather. All those huge and/or long buildings, I suppose are housing.

You packed a lot into your short visit to Brighton. It's always nice to get back to your own bed, tho. Hope your return trip went smoothly!

Another enjoyable blogpost from The Reed Blogpost Factory Ltd.. I see you were staying at the Brighton Harbour Hotel and Spa which is listed at number 17 out of 47 hotels in Brighton on Trip Advisor.

This weather is pretty typical of my beach experience growing up in the UK. Especially July. But we did have miles of white sand in North Yorkshire, not like those pebbles they call beach in Brighton.

You seem to have done a lot of interesting things in your short time there. I expect Olga is wanting her sofa now.

Love that 360 video. It's nice to see the whole view. Sounds like you, Dave, and Olga had a lovely vacation at the coast.

I'm like Dave - I probably wouldn't have thought to check the lost and found for the water bottle! Good for you for reuniting them!

I hope the departure went well for Olga.

The weather hasn't been ideal but for the end of November, but it hasn't been as awful as it could have been. I would love a massage! And a trip to the ocean although it's not the best time to do so here.

I loved the video. That view from up there is wonderful and I kept thinking how great it would be on a sunny day (if that ever happens in Brighton). Lucky getting Dave's water bottle back.
I'm impressed that you are walking back to the train station. I walked down the hill from it but I took a taxi back up.

Thank you for the lovely video; I can sightsee vicariously through you. Hope you didn't get soaked on the way to the train station.

I loved the video! This is the time of year I love the beach - although it might have been a little damp even for me.

Excellent that you got Dave's water bottle back. You ARE an expert!

That woman in the first pic looks rather forlorn there, all alone and it must be cold .. homeless?

The sea looks pretty wild. It's really churning up a storm.

Are they the South Downs in the distance? When we used to go "home" on leave in the 60s we would stay in West Sussex and I spent a year at boarding school in Littlehampton. We didn't go often to Brighton but did spend time on the beach (haha) at Bognor. I have fond memories of that part of the world. Thank you for bringing them back.
-Caro

Oh, splendid video. I'm surprised at the size of Brighton but it looks very bright. And interesting to be looking down on the flying birds. You are fortunate, indeed. And not JUST for the very good seafood restaurant. Tell Dave to lighten up!

Fran: We wound up walking but by the time we went it wasn't too bad!

River: Yeah, the roof is cool -- clearly painted specifically for the benefit of people in the i360.

Frances: We were surprised we didn't feel the wind at all, given how strong it was. The structure is pretty aerodynamic.

Mitchell: It's a nice hotel, but not high luxury. Probably better when the spa is open.

Colette: Dave was convinced he's an actor, trying out his skills on his customers. Maybe he changes accents from table to table?!

Bob: I KNOW! I thought the same thing. Some people are positively addicted to their phones. (Of course I was filming so I was using mine too, but that's different. :) )

Ms Moon: Yeah, it's bigger than I expected too, when seen from the air.

Ellen D: It DID feel really good to get home and get organized again.

YP: Wow, I'm impressed you figured that out just from the exterior photo!

Boud: Yeah, it's interesting that Brighton is so popular as a beach destination when there's real sand in so many other places! I guess it's all about proximity to London.

Robin: I tried taking photos but they just didn't show the experience as well as a video!

Kelly: We laughed so hard about that crazy water bottle.

Margaret: Massages are a worthwhile indulgence in my book.

Sharon: I think a sunny day would have been much better for photography. The reflections on the glass from the interior of the pod may not have been so pronounced if it were brighter outside.

Debby: Yes! That's exactly what the guy sounded like. Sort of Pepe LePew.

Pixie: Fortunately the weather held long enough for us to stay dry on the way to the train!

Bug: Yes, I also like a wintry beach. Olga, not so much.

Brigitta: I don't think she's homeless. I think she was just sitting out of the wind having a smoke. I like that photo because it really captures the feel of the beach at this time of year.

Red: It was pretty rough, but not as rough as the first day we were there, which was CRAZY.

Caro: Yes, the South Downs basically surround Brighton. The Seven Sisters (chalk cliffs) are part of the Downs, I believe.

Catalyst: Yeah, looking DOWN at a flying seagull is an interesting perspective!