Beachy Head and the Seven Sisters 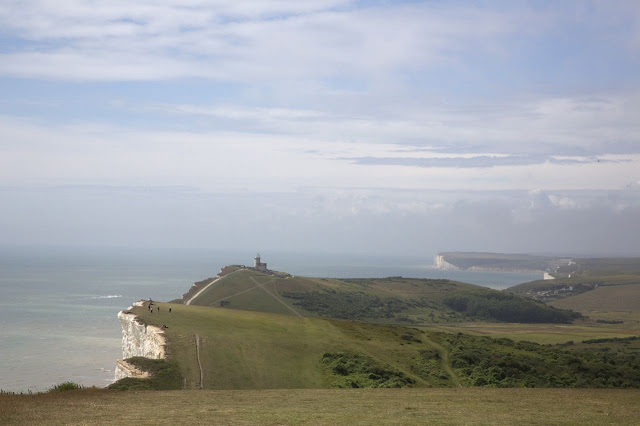 Yesterday we achieved the last of my English summer travel goals. We walked a small portion of the South Downs Way, a cross-country trail, from the town of Eastbourne on the Sussex Coast. We saw Beachy Head and the Seven Sisters, tremendous sheer cliffs of white chalk that drop straight down to the ocean.

I was very impressed with Dave for agreeing to do this walk with me. He's not crazy about walking or hiking, but he stuck it out!

We thought about bringing Olga, but it would have meant a lot of time on a train and keeping her on a leash during the walk (for reasons that will become clear). So we left her at home. 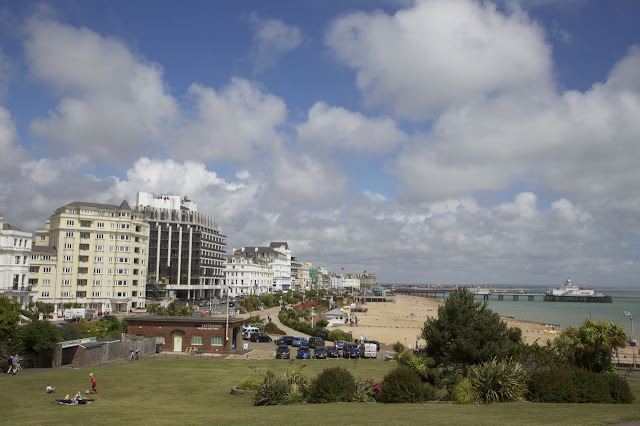 We started by taking the train an hour and a half to Eastbourne. We missed one train and then had a bit of drama with a reluctant ticket machine at Victoria Station and missed the next one too, so we had to hang around almost an hour, getting a later start than I had hoped. But that didn't matter. We were on no timetable.

Eastbourne seemed like a quiet mid-sized seaside town, bright white in the sunlight. Weirdly, it reminded me of old Miami Beach, back before it went all pastel and neon in the '80s. We walked to the oceanfront and turned westward. 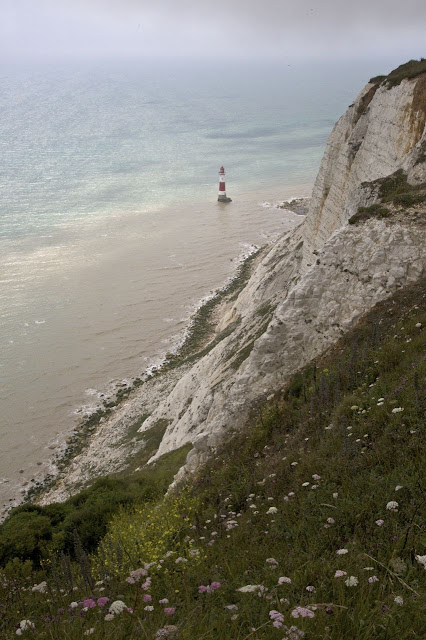 Beachy Head was our first stop. The tallest chalk cliff in Britain, it drops 531 feet to the sea below, where a lighthouse was built out in the water to make its location clear to ships. It was a bit of a climb to get from town up to the top of Beachy Head, but manageable and well worth it for the views. 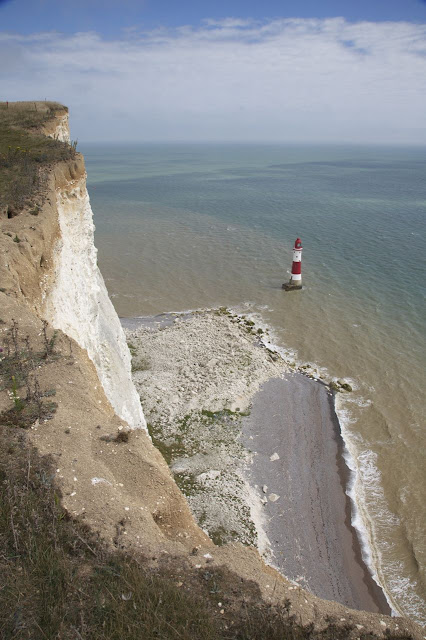 Apparently the name Beachy Head has nothing to do with beaches, although there is a small beach below the cliff. Instead it's an Anglicization of Beau Chef, its medieval French name.

Beachy Head has a reputation as a popular suicide spot. The edge of the cliff is dotted with memorial crosses and we saw a chaplain walking in the area. They routinely patrol to try to stop jumpers.

Perversely, I was reminded of the "This Man is About to Die" scene from "Monty Python's The Meaning of Life." (Link warnings: Gratuitous nudity! Objectification of women! In short, typical Monty Python.) 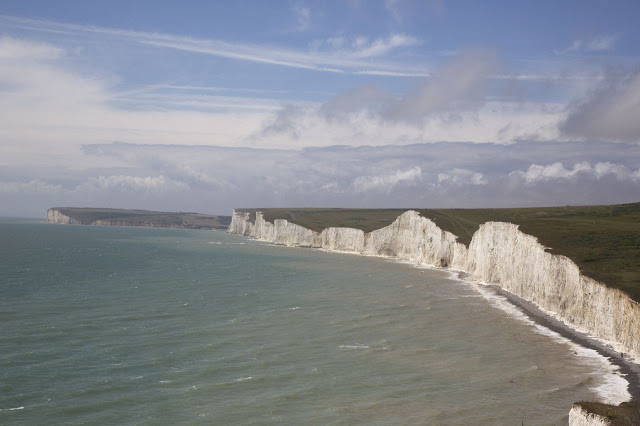 After Beachy Head we continued west, passing another lighthouse. We got a clear view of the Seven Sisters, a procession of white cliffs stretching from the village of Birling Gap westward to Seaford Head in the distance.

Incidentally, as you can see, there's not much in the way of barriers atop these cliffs. You can walk right up to the edge, though signs warn against getting too close -- the chalk cliffs continually erode and crumble, and the wind is fierce. There were a few areas with small, low fences and signs warning of erosion, and we respected them!

We ended our walk at Birling Gap, though the South Downs Way continues another hundred miles to Winchester. We caught a bus back to Eastbourne, where we took the train home. 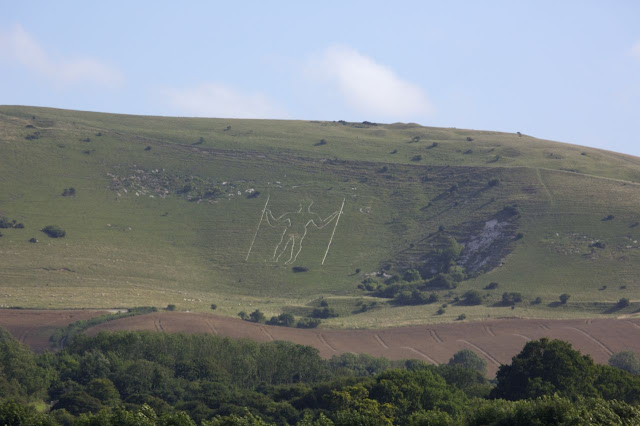 From the train we had a nice view of the "Long Man of Wilmington," a figure carved into a hill. The figure's origins are murky. It was once thought to be from the Iron Age, but some believe it to be much newer -- as recent as the 17th century.

We got home, ordered Chinese food and rested our weary bones!
Posted by Steve Reed at 7:09 AM

The first pic is spectacular and my personal favorite of the bunch.

Sounds like a delightfully tiring day. Those cliffs and that beach town remind me of JK Rowling's setting for The Casual Vacancy.

Fantastic images! I wish I could take a train to such gorgeous places but, I know there isn't a single passenger train that goes through Phoenix. What a great way to spend a summer day!
P.S. you are right about the area around The Praying Monk, it's a very expensive place to live.

Wow! What gorgeous pictures! What amazing views! I am so curious about that "Long Man". Things like that just pique my interest.
And the name change from Beau Chef to Beachy Head reminds me of the local beach here which is, in reality, named Cape San Blas but I swear to you- almost everyone just calls it Cape Sand Blast. I thought that was its name for years!

What a fabulous jaunt you had! And stunning photos!

I had no idea that one could get down there so easily and hike and be back in London the same day! Will have to remember for my next trip over there.

Those white cliffs are truly gorgeous. You're getting your list out of the way early!

What a wonderful day out, in spite of the train hiccups at the beginning. The photographs are simply fabulous, Steve.