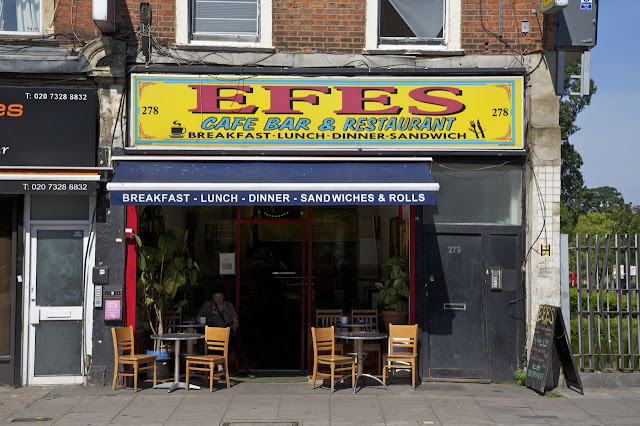 We're having a party on Saturday. Have I mentioned this? Probably not, because until yesterday I've sort of had my head in the sand. I'm not feeling hugely enthusiastic about it, I must say.

I didn't grow up around parties. Generally speaking, my parents would sooner die than host anything, although occasionally my mom would allow our house to be used as the site of a potluck gathering for people from work. I don't come by party-hosting naturally.

Dave is more excited about it, and in fact the party was kind of his idea -- initially it was going to be our wedding party, back when we thought we could marry in England. (Now, in light of the recent Supreme Court ruling, we're thinking we'll get married in Florida later this year.)

So, anyway, yesterday I finally got motivated and began preparing for this shindig. Most dramatically, I cleaned all the windows in the house, which was a long, hard job! At one point I had to stand in a hedge, holding a bucket of soapy water, leaves dropping down my shirt, to squeegee the front windows. They all look great now, though.

It was a beautiful day, so Dave and I had lunch on the high street -- we sat out in a little cafe and watched the passers-by -- and then went to a local garden center. It was a peculiar little place we'd never been before, tucked behind the parking lot for a construction site. I wanted to buy a hanging basket for a forlorn-looking vacant hook near our front door, but they didn't sell finished baskets -- so I bought some petunias and bargained for an old, slightly rusty empty basket, which I brought home and planted. The hook is no longer forlorn!

We also bought a few more plants for the garden -- because if there's one thing I've learned from Dave it's that you can never have too many. 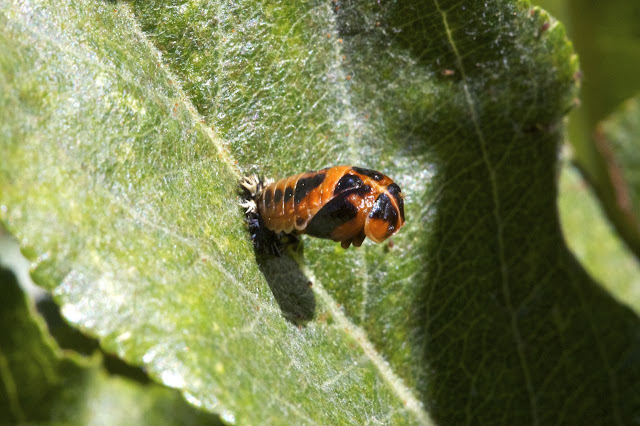 I know you're probably sick to death of me writing about ladybirds/ladybugs, but check this out -- yesterday afternoon several of the pupae were standing on their heads (or tails?) in this fashion. I'm not sure what was happening. I tried to find the answer online, and one commenter in a thread on a gardening site said it's a defensive posture to keep away predatory wasps. That seems unlikely to me -- why would a wasp be any less likely to attack a "standing" pupa? The standing ones all seemed to be in direct sun, so my theory is it has something to do with heat.

I understand your trepidation about hosting. Sometimes I think I was raised by wolves when I encounter one more commonplace social gesture that I feel awkward at. And washing the windows! Now that's a true sacrifice. Remember, if the party's at night, no one will be the wiser.

i love hosting parties...more than going to one. mainly because i am a picky eater and eating other peoples prepared food makes me nuts. strange i know :0(

The last time I had a party for anyone but my family, I stood in the kitchen and shouted, "NEVER AGAIN" when the last person pulled out of the driveway.
There.
I am not tired of your ladybugs. At all.

Holy cow....92 degrees in London has got to feel very hot! Drink plenty of water! You will probably enjoy the party once it gets going. I love having dinner parties but I'm not sure I've ever hosted a full blown party.

We've never been party givers much either. in fact we rarely socialize at all. I think the ladybugs' progress is very interesting. and I'm glad you have seen the value of MORE PLANTS!!!

I hope whoever is invited appreciates your clean windows... your ladybugs are certainly interesting...I once went to a gathering at which the host rather ingeniously cleared the place by saying that anyone left after a point was welcome to help with the dishes and washing up...People departed quickly...Not saying you should try it, though...

I'm sorry you're not looking forward to the party -- please hide behind your camera and take pictures for us! I am reading Sally Mann's book "Hold Still" and thinking of you throughout. It's a great read WITH photos and an interesting history of not only the south, her family and the artists she has known, but also of her process as a photographer. I can hardly put it down!

We aren't much for hosting either. In fact, it's been YEARS since we had a gathering at our home (and then it was just three other couples). And we're bad about going to parties too. We're invited to one on Saturday & we are GOING TO GO (yes, that was for my husband - ha!).

I was just noticing that the windows in our back door need cleaned. Maybe I'll do that today!

I am also not the hostess with the mostess. I don't like giving parties, but will do so when pushed to.

I think the ladybug's position might just be a defensive one like that commenter said. They may be very vulnerable at this time, so the standing position makes them look more awake? As for only the ones in the sun doing this, I don't think it's because they are "sun worshippers" but maybe in the sun they are more visible to predators. Fascinating.

I like the party ok when it's happening but am a wreck beforehand. Why, I wonder. Is it perfectionism?