Sun and Rain, This and That 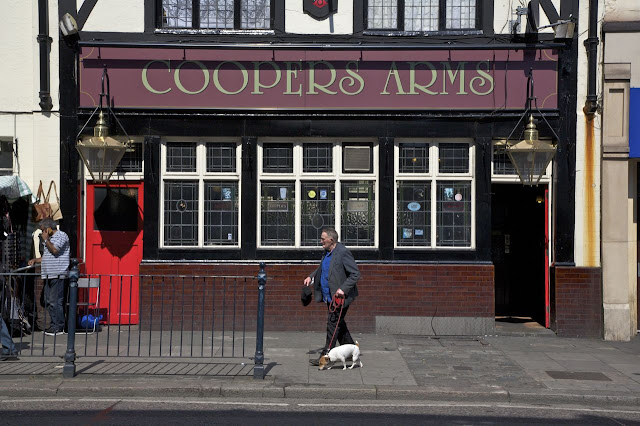 We're having a midsummer chilly spell. It rained all day yesterday and the temperatures were in the high 50's. Thank goodness Olga's dog-walker showed up -- even though he wasn't technically scheduled -- so I could spend the day pretty much on the couch. It was fabulous.

(I'm posting this sunny photo of a nearby pub, taken several weeks ago, as an antidote to the chill.)

I did get some productive stuff done in the morning. I managed all the refuse for our household and those of our neighbors, as I wrote yesterday -- and the rubbish men did pick it all up, thank goodness. You just never know with those guys. Sometimes they leave things behind and sometimes they come through.

I also worked on bagging up some yard waste that we've been piling up at the back of the garden. We don't want a super-manicured garden -- we want to leave some places for bugs and critters to live. But that pile of old cuttings, twigs and branches was getting out of hand. It will be collected next week by the yard waste recycling people.

The downside of working in the yard, for me, is that I always get attacked by nasty little gnat-like insects that leave red, itchy welts on my skin. They never seem to bite Dave -- or if they do, they don't leave marks -- but they feast on me. It only happens when I thrash around in leaves, weeding or, in this case, bagging up brush. My arms are a red lumpy mess. 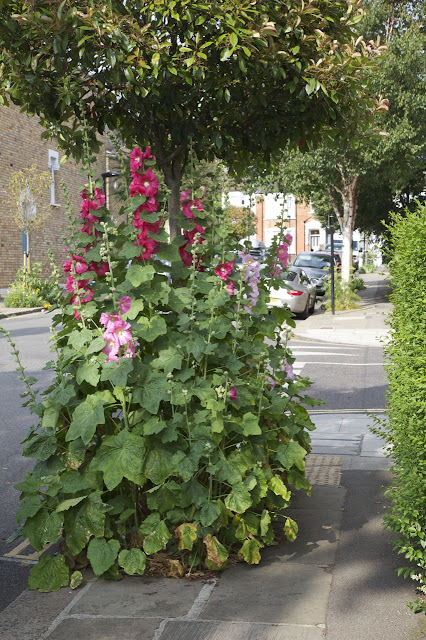 I've been meaning to post this photo of some hollyhocks growing on a street where I regularly walk Olga. Aren't they impressive? As tall as I am! They came up like this last year, too.

Finally, Dave and I watched several movies -- "The Imitation Game" and "The Theory of Everything" (it was "British scientist biopic" night, apparently) as well as the original "La Cage Aux Folles," which Dave had never seen. He loves "The Birdcage," so I wanted him to see the original European movie on which it was based -- and even I never realized how closely the two are linked. The dialogue is almost line-for-line. "The Birdcage" always rankled me -- the idea that a young man in 1996 would ask his gay parents to upend their lives and hide their relationship from his fiancée's family annoys me to death. But the original was made in the 1970s, and back then, that plot seems more defensible. 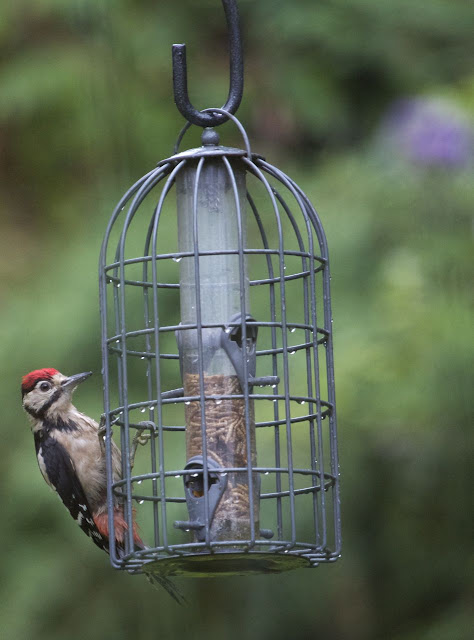 I finally got a decent shot of the woodpecker that comes to our yard. We replaced the bird seed in our feeder with dried mealworms, because the seed was attracting so many huge, flapping pigeons that the other birds weren't coming around. Apparently pigeons don't like mealworms. But woodpeckers do!
Posted by Steve Reed at 6:27 AM

Sorry to read that you also get attacked by the critters. I think that's what they are actually called in English. We are plagued by them here and they love sunny gardens - who wouldn't. I find that apart from wearing long sleeves and pants (pretty awful in summer) it helps to shower directly after gardening and using proper soap to really wash yourself. Apparently they otherwise settle down quietly waiting for you to calm down before they can act out whatever it is they need to act out. They also love pets and I used to find them in small orange crusty lumps on my cats often near the ears. One little lump home to an entire critter clan.

What? No pics of the new kong toy? Great photo of the woodpecker...I'll have to tell you my woodpecker story one day...

You are probably - unlike Dave - one of those lucky souls with a special chemistry that attracts insects.
I remember sitting out in my in-law's yard one summer day when my now-giant son was a small boy. We might as well have pegged him out as a human sacrifice to spare the rest of us. He was the only one bothered by the bugs. (And no, we didn't just leave there him to save us from having to get the Citronella!)

Oh, bugs. Damn them! My right foot is covered in ant bites.
Those hollyhocks ARE amazing. I don't think they grow here. Probably it's TOO HOT!
Enjoy your weather.

What a great shot of that woodpecker and those hollyhocks are wonderful. It's hard for me to even imagine 50 degrees right now. It's so darn hot here.

Great shot of Woody Woodpecker Steve! What's with all this "yard" stuff? In England a yard is usually a small hard-surfaced outdoor space behind a worker's house or behind a small business or factory. I know that Yanks use the term "yard" where English people would normally use "garden"...and where are you now old chap? Yeah, so it's garden, right?

Sabine: They are vicious! I've never seen them bother Olga or Dave. I don't know why they like me.

E: The new Kong looks just like the old Kong. It is not picture-worthy. :)

Marty: I do think some people are just more tasty, to an insect, than others!

Ms Moon: I never saw hollyhocks in Florida. I think you're right -- they're one of those many garden flowers that just don't grow in the Sunshine State.

Sharon: It's hard for me to imagine heat! But I'll be experiencing it full-on in just a few days.

York: John from "Going Gently" has also teased me about my use of the word "yard." What can I say -- I'm American!

Hah - yard is what we call it in Canada, too ... must have rubbed off from our neighbours (spelled with a 'u', yet). We might just be really confused here :)

I LOVE hollyhocks! When I was younger I was VERY attractive to mosquitoes. Not as much now - or maybe Mike is equally attractive so we just share the "wealth." Ha!