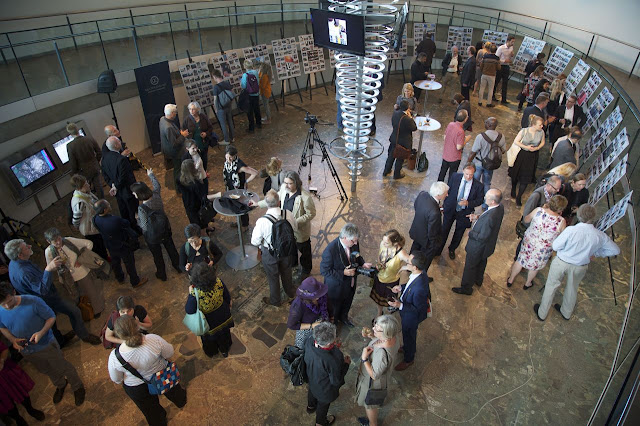 The preview party for the Bleeding London exhibit was last night at London City Hall, an ultramodern, egg-shaped building on the Thames. The author of the "Bleeding London" novel that inspired the project, Geoff Nicholson, was on hand, as well as lots of the photographers who contributed legwork and lenswork, and the volunteers who helped pull the show together.

(That's a big satellite photo of the greater London area that we're standing on in the photo above. It serves as the floor of the building's rotunda!) 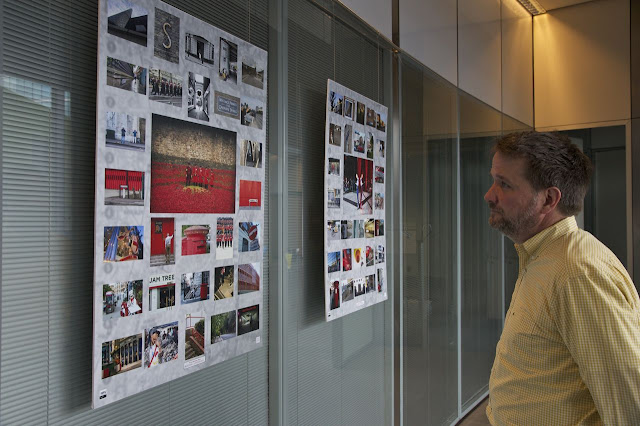 It was cool to finally see what had been chosen for the show. The pictures are exhibited mostly snapshot-sized, clustered together on boards. The curators seem to have tried to group pictures by common elements of color or shape to give some continuity to the boards. 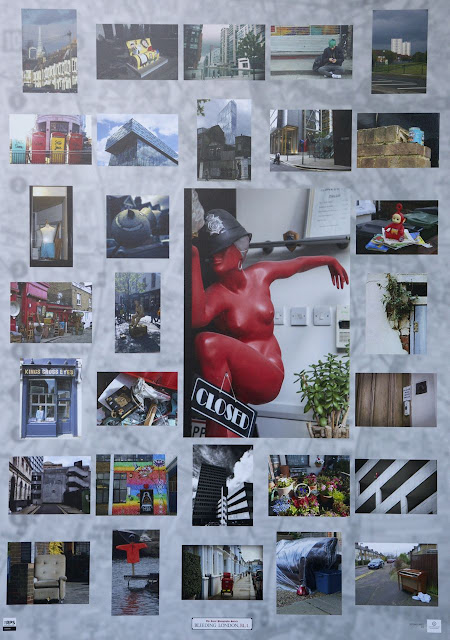 Here's a close-up of one. The quality of the images is good and they do make for interesting browsing. My only complaint is that they are divorced from their locations -- there's no catalog or guide to tell viewers where each photo was taken. To me, the locations, and the diversity of locations, are key parts of the project and the individual images. But I can see how managing that in a display could be tricky -- you wouldn't want to clutter up the pictures with a lot of lettering. 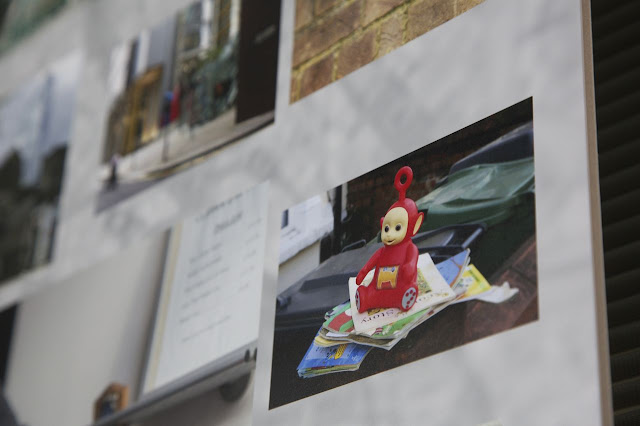 So how did I do? Well, on the boards available for viewing last night, I found 16 of my pictures -- including a few surprises, like the Teletubby above that I photographed sitting out with the trash somewhere in East London. I don't think we were seeing all of the boards, either, so there may be a few more. Several of my own favorites -- which you've already seen here -- were also included.

To be honest, the opening felt a bit anticlimactic, after so much walking and so much work. But the joy, for me, really is in taking all the pictures and discovering the city. (Which I'm still doing!)

I think there are still plans for a book and possibly other future exhibits. This one runs at City Hall until August 14. The details are here!
Posted by Steve Reed at 6:50 AM

16 of your images. not too shabby.

Oh, Steve! You should be so proud! I agree with you though- isn't the location the main thing? Sort of a map via photos?
Well. Who knows who decides these things?
And I will tell you that I am proud of you, although I have no reason to be except that you are someone I know! And that you are a good man and a fine photographer and I am so glad I've gotten to know you.

Oh wow, I so wish I could be there to see this. Sixteen photos used is an impressive number with so many people participating. What an awesome achievement.

But I do agree with you, the locations are the thing, the fact that every street is covered, wow! Cant they do a book with large scale maps of London that imposed the photos on their respective streets? They could even do volumes with each section of London being its own book, if the whole endeavor was too unwieldy for one volume. I hope they will consider it!

So proud of you!

Sixteen...Well done! Did you ever read the novel?

Excellent and congrats! We had the reception this evening for our employee art exhibit. Over the past three years I've had 2 honorable mentions and last year placed first. This year...nada. I will live vicariously through your success...LOL Good going! :

Congratulations on the big day!