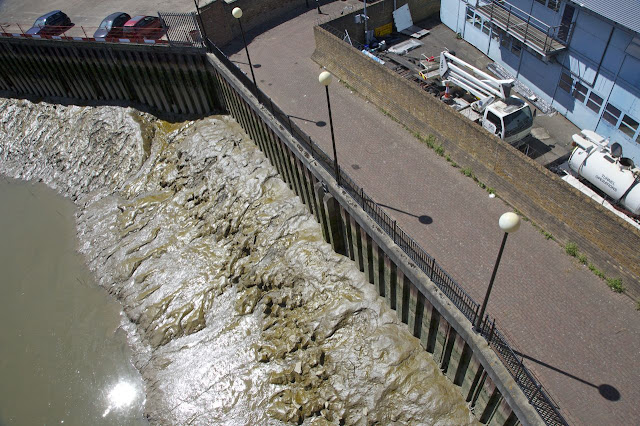 After checking out Robin Hood Gardens on Sunday, I walked eastward through the London Docklands, areas that a century ago and more were a hive of activity for ships and sailors from all over the world. Most of that shipping has gone away now, and the Docklands are full of industrial estates -- some shuttered -- and formerly industrial areas that have been redeveloped for residential and commercial use.

I crossed a bridge over the muddy mouth of the River Lea, which flows through East London and spills into the Thames... 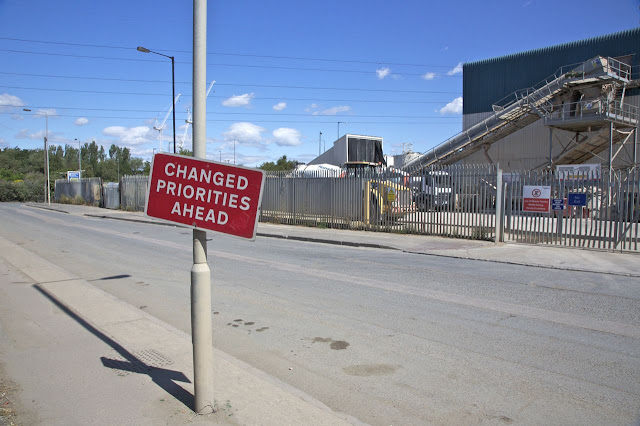 ...and walked through industrial areas (with some curious signage). I walked beneath the Emirates Air Line, the cable car that runs from Docklands to the O2 Dome. You may remember we rode this cable car several years ago.

Finally, I got to an obviously man-made sandy beach on a canal near Silvertown. 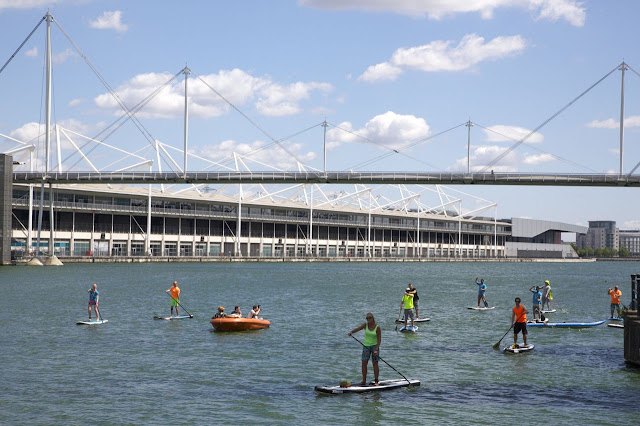 Paddleboarders were making their way up the canal past the Excel Centre, a massive convention and exhibition hall. I walked along the banks to Millennium Mills, a huge derelict flour mill that's being renovated into a tech center and housing. 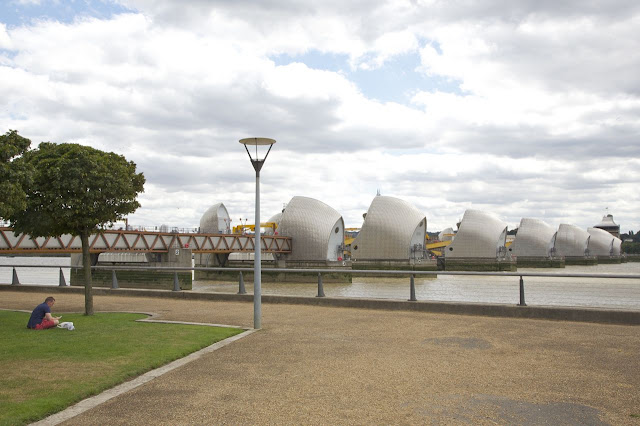 Then I made my way down to the north bank of the River Thames, where a nice park overlooks the Thames Barrier, the flood-control devices that are meant to control extreme tides and save central London when necessary. (I wish I'd known about this park when I took my college friend's daughter Sarah to see the Thames Barrier years ago! We saw it from the south bank, where the amenities aren't nearly as nice.)

I bought lunch at a little cafe in the park and walked around a bit, enjoying the whir of crickets in the long wild grass and watching people play football and lie in the sun against the futuristic backdrop of the barrier. 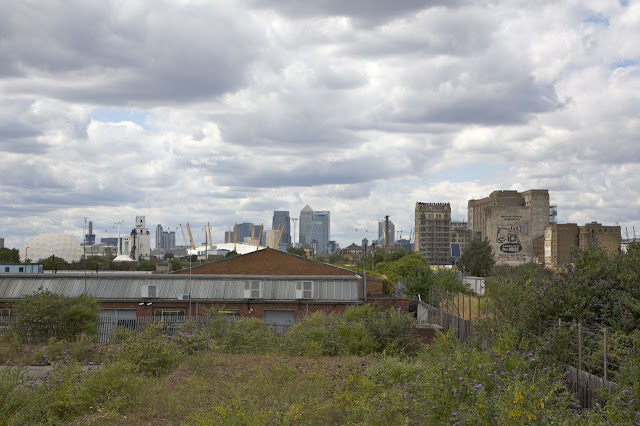 Finally I made my way up and over the Connaught Bridge, which connects the Docks to the mainland -- and which, by the way, doesn't really have much of a sidewalk, at least not where I was walking. (Very unusual for pedestrian-minded London! Was I on the wrong side of the bridge? Maybe.) Great views over the Docklands and back toward Canary Wharf and central London.

I walked up through Plaistow and caught the tube for home. It was a great day out!
Posted by Steve Reed at 7:26 AM

There is just so much more to London than I ever could have imagined. Thank you for exploring and sharing.

I wouldn't have expected to see all those paddle-boarders out in London but, I guess where there's water....
I have never seen the Thames barrier in person. I should make a point of seeing it the next time I'm there. I've never been to Greenwich either and I certainly should go there. So many places to explore!