More Durham, and a Dogfight 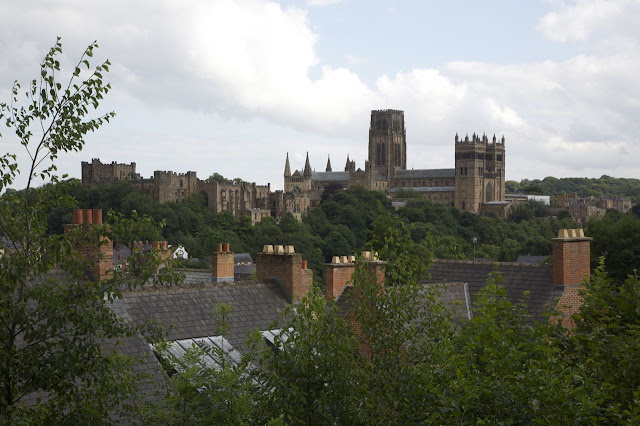 My other objective in going to Durham was much more conventional -- to see the cathedral. The modern city of Durham is built around an imposing bluff above the River Wear, where a cathedral has stood since 1093. It's a distinctive building that preserves much of its Norman architecture.

Durham, as a buffer between England and Scotland, was a strategically important area back then, and it was ruled by a succession of Prince-Bishops who wielded both religious and secular authority.

As luck would have it, a huge service was going on when I visited, so I couldn't wander around the building as freely as I would have liked. But I could stand in the back and see the main part of the nave, which has unusual columns carved with geometric designs. (Photography wasn't allowed inside.) I could also walk through the Benedictine cloisters and around the palace green, between the cathedral and the adjacent castle. 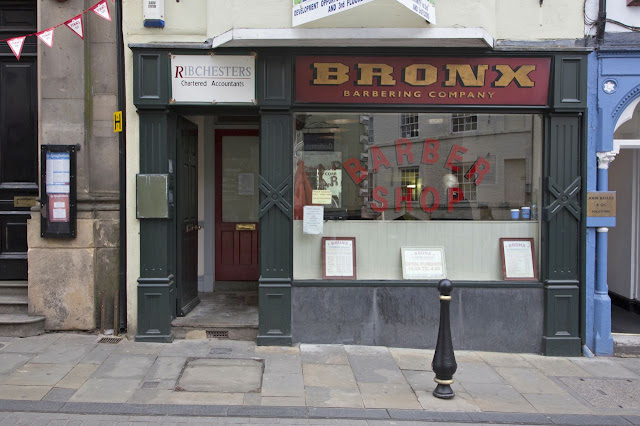 I also had fun walking around the town itself. I found some quirky shopfronts, but overall it was sadly dominated by chain stores. (I must admit I contributed to the onslaught of the chains by going to Cafe Nero for lunch. What can I say? Sometimes you want something familiar.) 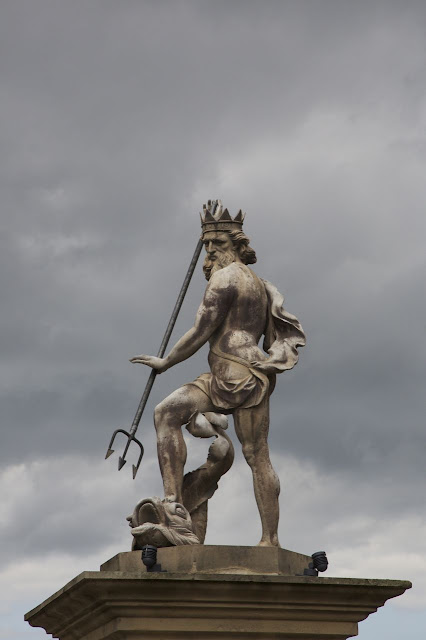 This statue of Neptune stands in the Durham Market square, a gift to the city in 1729 by a Parliament member. It's symbolic of an effort to improve navigation on the River Wear and link Durham to the North Sea. 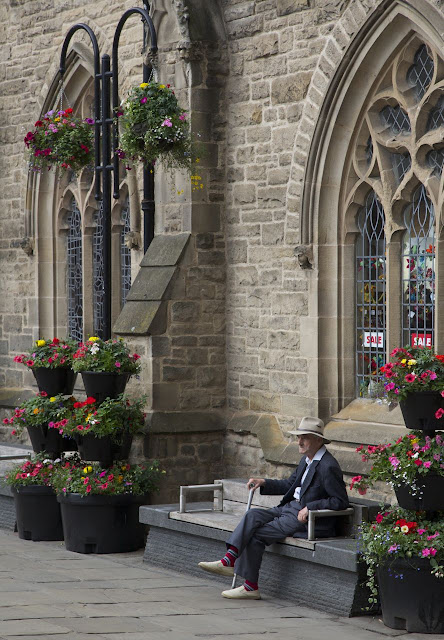 Durham is a university town, and it seems quite cultivated overall.

After wandering for the afternoon, I caught the 5:39 train back to London. I was home around 9 p.m.

What I didn't mention yesterday, while describing my visit to the Apollo Pavilion, is that I witnessed a scary dogfight while I was there taking pictures. A woman walking a big yellow dog and a rough-looking man with a brindle staffy crossed paths, and I didn't see who started it, but soon enough those dogs were rolling around snarling. The staffy got ahold of the yellow dog's foreleg and would not let go. The yellow dog was yelping and the woman was screaming, "Get him off my dog! Get him off my dog!" But the man couldn't do much until the staffy relented. The woman ran off with her dog in tow, calling back to the man, "Your dog should be on a lead!" The man retorted, "He IS on a lead," while his panting staffy stood next to him, plainly not on a lead.

Anyway, it was scary. As a staffy owner I hate to see anything that perpetuates the image of staffies as badly behaved dogs, but that owner didn't look particularly responsible -- and after all, dog behavior is all about the owner, isn't it? (And there I was, camera out, and did I take any pictures of all this excitement? None! I was too transfixed. I would make a terrible photojournalist.)
Posted by Steve Reed at 7:36 AM

I disagree--you do photos almost daily and they are wonderful. As for the dog fight, it would be easy to become transfixed and alarmed. I'm glad Olga was safely at home.

I'm glad you had a nice outing. It's a good thing that the staffie didn't follow after since he was not on a leash.

What I have noticed with the bulldogs we've had is that if they DO get in a fight, they don't stop until someone is badly damaged. Horrifying. Who could think to take picture at such a moment?
I love that statue of Neptune. The USA is sadly short of statues. And when we do have them, they're always about war.
Ugh.

terrifying dog fight! Glad there are no photos of that , thank you. Love the last photo , the old guys socks, the "sale" sign in the magnificent window and the controlled , stacked, flowers. Really lovely! Neptune looks mighty! Three hours on a train is not bad, it takes me six hours one way to ride the train to Portland. Stella and I want to go somewhere this week, but everything is so far away, it takes a day to get anywhere!

E: It's not the quality of the photos I mean -- it's my ability to keep shooting when something dramatic is happening right in front of me! I'm glad Olga was home too. She had nothing in common with these other dogs.

Ellen: Yeah, once the other dog was retreating he seemed satisfied.

Utah: Sometimes, yes! Honestly I'm still vague on whether there's any difference at all.

Ms Moon: I didn't notice whether the other dog was injured. He beat it out of there too quickly! But yeah, bulldogs mean business. I think the key is whether they have any fighting experience. Olga has never fought a day in her life and I'm not sure she'd know what to do. But this other guy obviously had done his share of fighting.

Linda Sue: Yeah, that's the problem with the beautiful West. Everything is so far apart!

Sharon: I think that was some kind of church gift shop, but I'm not sure. I didn't go in.

When I read that you had made the long trip to see the Apollo Pavilion I thought what a pity he isn't going to see the beautiful Durham Cathedral, but you did. Your timing was unfortunate with the service in progress as it is one of my favourite cathedrals. When I was there in 1997 we were allowed to take photographs and we only had film cameras with flashes. It seems silly that the public are not allowed to take them now with digital cameras which do less harm.