A Walk Through Ilford 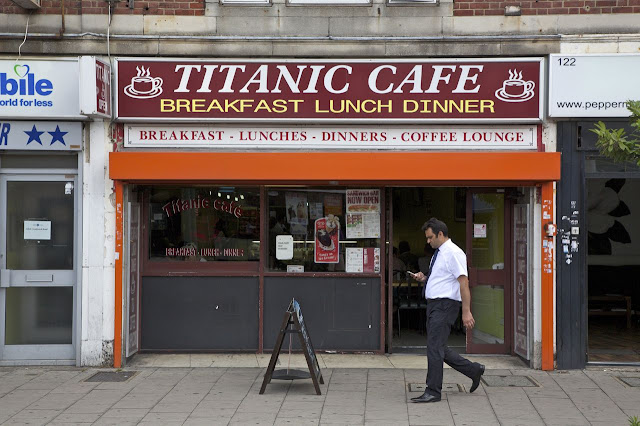 I've been feeling a need to do some exploring, so I took a photo walk yesterday through Ilford, an area of East London that I'd never visited before. It's a busy, immigrant-dense neighborhood, with many South Asians, Middle Easterners and West Indians. It made for some interesting photography, but I wish I had more courage about photographing people directly and at close range. I saw several opportunities for incredible photos but I just couldn't bring myself to take them. Sometimes it just doesn't feel right, you know? And you have to go with your instincts.

Anyway, I started in Gants Hill and walked south through Ilford to Barking. I was out for several hours and I stopped for lunch at the cafe above. I'm a sucker for anything Titanic, even though the theme wasn't hugely evident inside -- just a shelf featuring a model of the ship, some related books and nautical bric-a-brac. (Curiously, this is not the first Titanic Cafe I've found in London!)

While wandering around a residential neighborhood, I found a sad, battered, wilted hydrangea lying on the ground in a damaged plastic pot. It looked like it had come from a nursery and then been run over, stepped on or crushed in transit. I thought, "I bet Dave can rescue that!" So I picked it up, and just as I was about to walk away, a man came out of a seemingly vacant nearby house and stopped me. "Oh, is this yours?" I asked, thinking, "Have I gone so daft that I picked this up out of his front garden without even realizing it?" But he said I could have it, no problem. So I hauled it back to West Hampstead. Dave pruned away the damaged bits and we'll put it in the ground today.

I also chatted with two older gents outside an antique shop who talked at length about the neighborhood and how it had changed. They'd both been there for decades and remembered it as a white and Jewish area. "There are streets here named Bengal, Madras and Khartoum, and when the newer immigrants saw that they thought they were home," one joked. (There are also streets named Britannia, Jersey, Norman and Saxon, but I didn't press the point.) Anyway, to hear these guys tell it, antiques are a hard sell in Ilford nowadays.
Posted by Steve Reed at 7:08 AM

I wonder if you saw the fantastic long article about the great photographer Robert Frank. It was in the New York Times yesterday --

What fun! And what did you eat for your lunch at the Titanic Cafe?
Dave will save that plant. You watch.

When I saw this photo I thought to myself that it was a rather ill-fated name for a business. Apparently not since there are so many of them around.

no fake icebergs floating around inside? I will pick up damaged discarded plants too. in fact I picked up three smashed looking bulbs of some kind and planted them. two of the three began to put up some new foliage but one withered. still have one growing though. don't know what it is.

Neighborhoods evolve. If you came back to nyc today you would not believe the change in harlem, which is becoming the dining out capital of the city. Honestly, i'm trying to adjust my 80s brain and realize it's really quite gentrified now. which has its pluses and minuses...

I like it when you get out & explore new places (which, honestly, feels like about every other day - ha!). I shall expect regular updates on the hydrangea :)