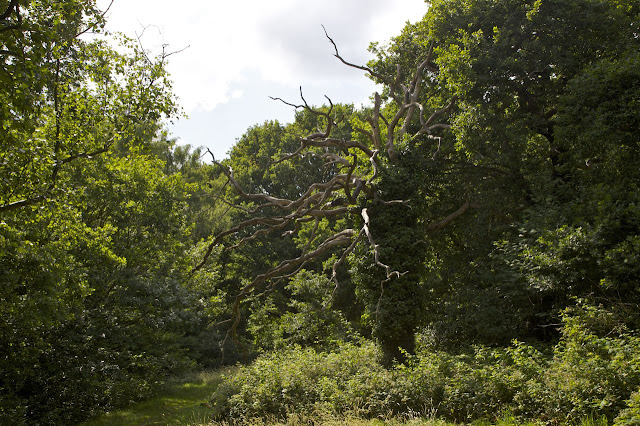 Dave and I were in post-party recovery mode yesterday. We had a day of relaxation, starting with a brunch at a local French bistro where, out of the blue, they comped us glasses of champagne. Good Lord. Apparently it's a champagne kind of weekend! Turns out it was the fourth anniversary of the bistro's opening. I guess we have a talent for being in the right place at the right time. 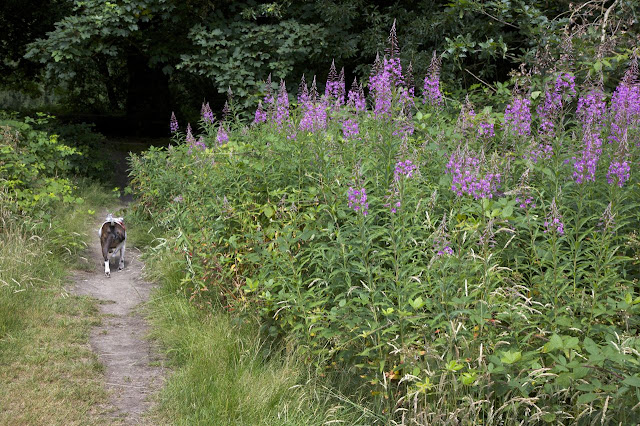 After we came home I did laundry and then took Olga to Hampstead Heath. Those spiky purple wildflowers are blooming in profusion again, just as they were at about this time last year. If I ever knew what they're called, I've forgotten. 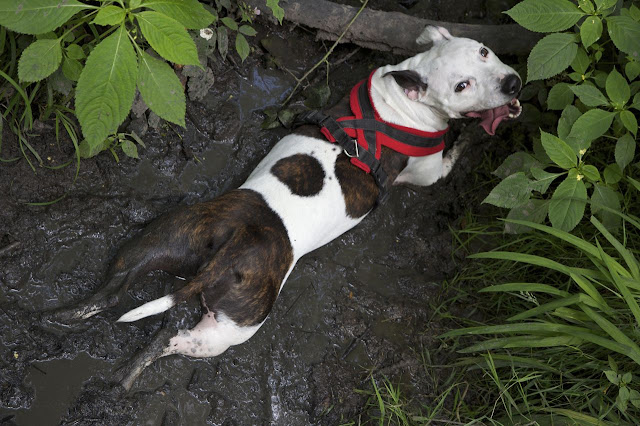 Olga once again seized the opportunity for a mud bath. 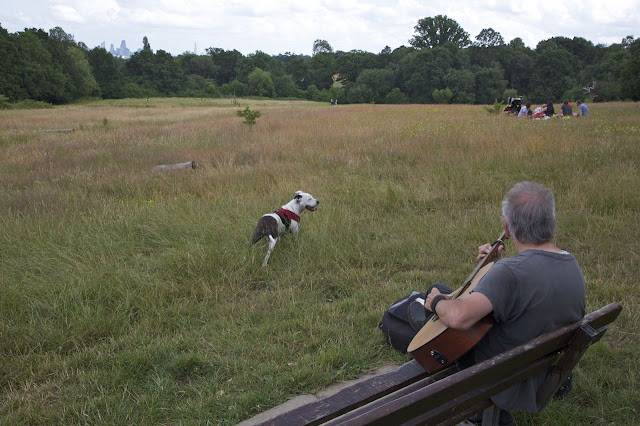 And then we found this guy, sitting out on a bench playing his guitar and singing. He had a great view, high on a slope with the skyline of London visible beyond the trees. I took several photos of him and we had a chat, but it was difficult to get the picture I wanted -- of him and the city -- because of the angle of the bench. Olga seemed to dig his music, though.

Speaking of music, I've started reading the most fascinating book about the history of disco, "Turn The Beat Around" by Peter Shapiro. I'm reading it with iTunes by my side, so when the book mentions an obscure pre-disco dance or funk track from the '60s or early '70s, I can look it up and listen to a clip. "Black Skin Blue-Eyed Boys" by The Equals, for example -- it was completely unknown to me, but there it is on iTunes. The wonders of the Internet!
Posted by Steve Reed at 7:02 AM

The plant?weed in question is in the UK called rosebay willowherb
https://en.wikipedia.org/wiki/Chamerion_angustifolium

Glad my canines aren't so keen on mud baths...

Free champagne is the best. I used to go to a hairdresser who almost always opened a bottle of champagne for his customers. I'd still be going there if we hadn't moved away.

FIreweed! We have it at the cabin, too and I love it. People would pay big money for Olga's mud baths!

I get a crushing headache if I drink champagne so you can have all of mine.
That Olga. She makes me laugh.

that look on Olga's face in the mud. today I'm recovering from the latest grandkid week.

Nice outing...Was Olga clean again by6 the time you got home?

at first I thought that you had been compt champagne because ...marriage! Oh well, no complaints! free champagne , disco and Olga is a pretty nice day, I reckon.I awoke two nights ago, laughing! Dreaming about Olga, such a funny girl!She certainly has her paws full trying to train you properly...next time she invites you into the mud, better do it...that would be encouraging for her, and her teaching skills.

Nicholas: Thanks for the plant ID! I don't think I ever knew the name, now that I see what it is.

Lynne: Yes, fireweed is apparently the American name for the same plant. Maybe Olga should open a spa?

Ms Moon: I do too, sometimes, though it didn't seem to bother me Saturday. Hydration is the key!

Ellen: She knows how to work it for the camera.

E: She was, believe it or not. I just wiped her down with a warm washcloth for good measure.

Linda Sue: Funny that you dreamed about Olga! She's a star! :)