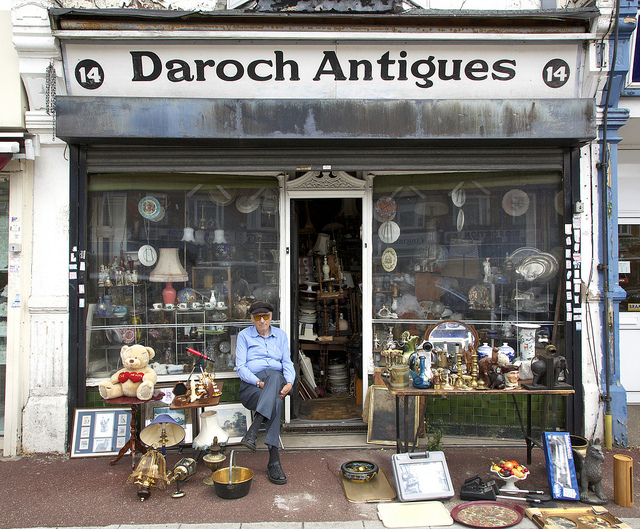 This is a fitting photo for my post today, because I'm writing about my antique of a computer! Or at least it's behaving like an antique. The rest of the world certainly treats it as one.

My computer is four years old -- purchased in May 2011. In computer and software years, that's a century. Granted, it's seen fairly heavy daily use, including uploading and processing thousands of photos.

Lately, it's been acting up. The processor gets very hot when it does anything with large quantities of data, like streaming movies or uploading a hundred pictures. Occasionally it stops streaming or importing entirely and just freezes. It also drops our (admittedly wonky) Internet connection fairly frequently, often in the middle of a task. (Dave's computer doesn't do that as often, so I know it's not just the connection.)

Flickr no longer works with my version of the Safari web browser, and when I tried to update Safari, I found that no updates are available for my operating system. Apple has essentially stopped supporting this OS. I used to get software updates regularly but now there are none. (I can still access Flickr with the Google Chrome browser.)

Yesterday, I tried to sign up for an Adobe membership that would allow me to use Lightroom and edit my pictures "in the cloud." I signed up, paid, and when I tried to install the software, Adobe told me it wouldn't work on this computer. I contacted Adobe to be sure, and the customer service people confirmed that my OS is too old. So I had to cancel my brand-new membership.

All of which is to say that my computer's days are numbered. The Adobe problem isn't severe because we have Photoshop on our computers at work, so I can always use it there. The other problems are annoying but not so terrible that they limit my use of the computer.

Dave has been urging me to buy a new one, but my goal is to make it last five years -- until next spring. I think I can push it that far. It makes no sense to buy a new operating system in the interim, when the machine itself is so old. So for the next several months I think I'll just stagger along. Unless the processor dies entirely or I can no longer import photos, which will be a game changer.

I also have an iPhone that's almost six years old (but still functional!) and my iPod -- which is really ancient -- seems unable to hold a battery charge. It's getting to be time for a technology overhaul! 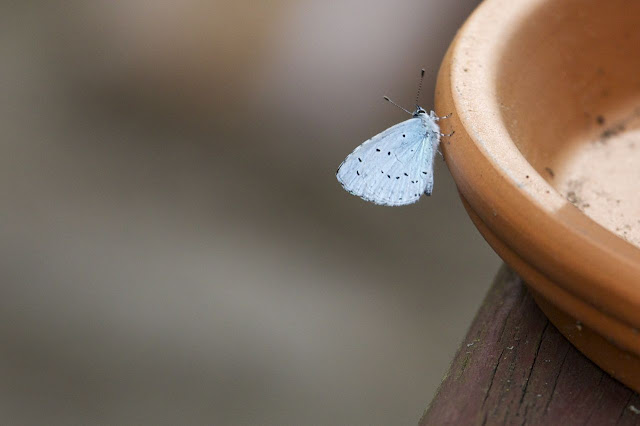 On another subject entirely, this little blue butterfly fluttered around the patio yesterday as Dave and I sat outside in the evening. I believe it's a Holly Blue. I've just started seeing butterflies within the past week or so -- mostly cabbage whites.

(Top photo: The antique store I mentioned in yesterday's post, Ilford.)
Posted by Steve Reed at 7:02 AM

I have an Imac of the same vintage and have the same problem but I cannot afford another. I wondered about the sound on your laptop assuming one can stream or insert DVDs and compact disks or listen to streaming radio? Also, I know you Skype on yours as well. Let me know what you decide. I will miss the 27 inch screen.

I think my iMac is almost four years old but I don't push it to do the things you do. Still, I worry. But hey- if you wait until everything needs replacing at once, you're going to wish you'd staggered it all out a bit.
Just my thought on THAT!
What a pretty little butterfly! I see so many but can't get a decent shot to save my life.

Would you have to BUY a new OS? Would the fresh faced geniuses at the Apple Store upload the newest system for free?

oh, my Imac is about 5 years old too but it still does OK. does get really hot sometimes though.

You are describing my worst nightmare. Everything dying at once. Since I bought my Mac in May of 2010, mine is even older than yours. But, as far as I know, I'm up to date on the operating system. I get updates regularly. However, that little rainbow colored spinning ball is showing up constantly now and it takes longer and longer to boot up all the time. As for my iPod, I still use the original one but it sits in a speaker hook up connected to an electric outlet all the time. It quite holding a charge years ago. I had to buy a little one to use when I travel. My iPhone is a little newer. I got it in 2012. I think I'm due for a upgrade there too. These things are like crack, once your hooked, your hooked!

My Mac is the same vintage and Safari keeps getting notices that it isn't supported anymore. The computer works fine and I hate have to replace it just so that I can access some youtube things etc. It's a conspiracy.

PC user here, so all I hear is blah blah blah MAC blah blah blah Apple... :) I've probably had three computers since 2011. I do have an iPhone now, courtesy of work, but luckily I'm not responsible for any issues with it - I'll make them give me a new one. Ha!

I have a PC desktop that is nearly five years old and is just so slow and creaky that I know I'll need a new one before the end of the year. I just hate buying new computers -- to me, it's like cars or something.

My laptop is much older than that. And excruciatingly slow!