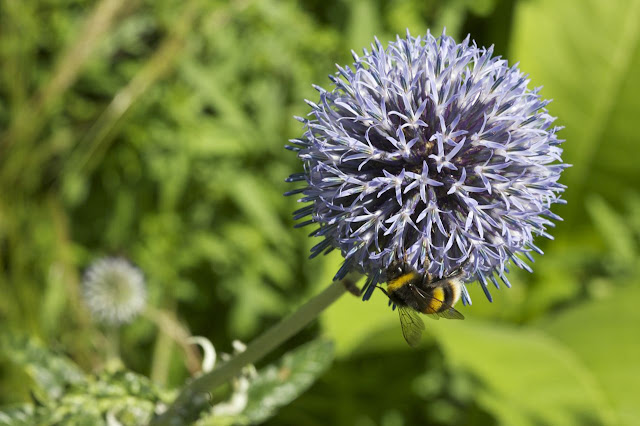 We've moved into a new mini-season in the garden. The roses have finished their first flush and the pink persicaria are gone, and in their place so much more has bloomed -- the loosestrife, the butterfly bushes, the hydrangeas.

Our globe thistles sent up spiny round flowers weeks ago, and we thought, "Well, those aren't very impressive." Then one of the globes covered itself in tiny purple flowerets, and we were more impressed. As were the bees. 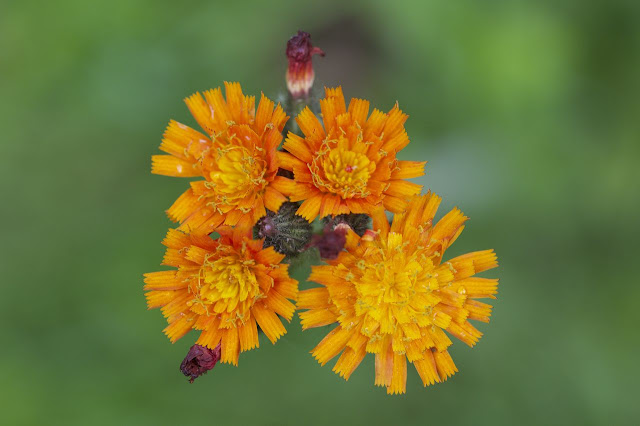 Our hawkweed is going strong. I found out another name for this flower is "fox and cubs," which is pretty adorable, isn't it?

Speaking of foxes, I haven't seen ours in weeks and weeks. But as I type, I hear one barking nearby. So they're still out there. 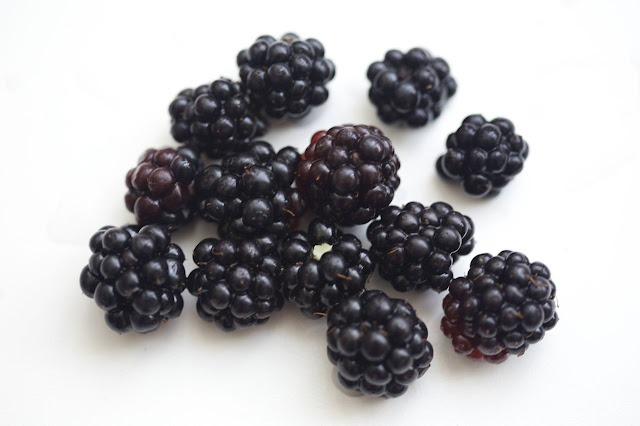 It's blackberry season again! I picked these yesterday from our bushes and ate them on my cereal. 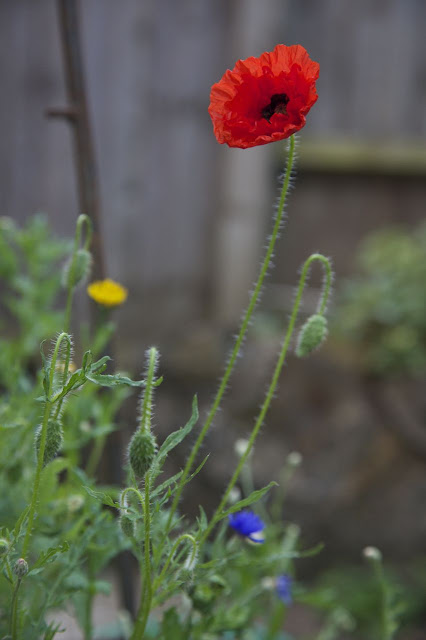 When I went out this morning, I found this wonderful surprise amidst our wildflower seed patch -- a red poppy, like a swirling flamenco dancer. We're getting blue cornflowers and some kind of yellow daisyish things too. 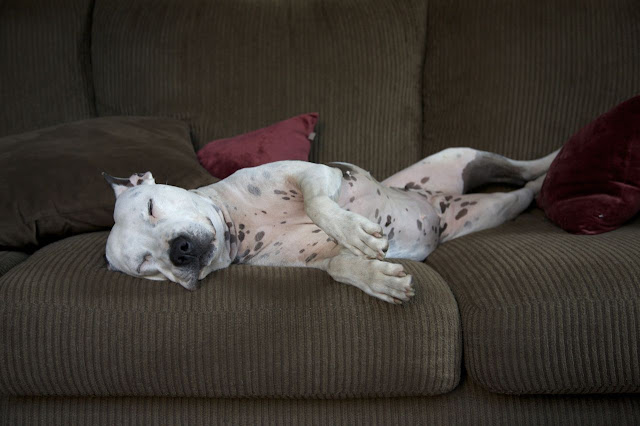 Olga is unenthusiastic about it all.

Dave and I went to dinner last night at Fifteen, one of Jamie Oliver's restaurants, to celebrate our fifth anniversary. I can't believe it's only been five years since we civil-unioned in New Jersey. It seems like a lifetime ago! (I swear, I mean that in a positive way. So much has changed since then!) We had a great time and it's a nice restaurant -- and its profits support a charity that helps challenged young people get training and mentoring in restaurant work.

Also, a couple of nights ago, we watched a fascinating documentary, "You've Been Trumped," about Donald Trump's ultimately successful efforts to build a golf course on a patch of oceanfront land in Scotland. The film raises some interesting questions about Trump and the complicity of some local officials -- including the police force -- in making this development happen against the strong wishes of immediate neighbors, scientists and environmentalists. I'm not sure it's exactly even-handed, but it's definitely entertaining and revealing. His presidential candidacy isn't viable -- is it?
Posted by Steve Reed at 6:32 AM

Such beautiful flowers -- and that Olga is truly the most charming dog ever.

There was a rumor in Cozumel for years that Trump was somehow going to buy land on the "other side" of the island which is wild and build a resort and golf course. Thank god that so far, that has not turned out to be true.
Happy anniversary! I think that Olga and your garden are sweet gifts of domesticity.

Oh lord I hope not! Most people I know laughed when Trump entered the race but now we hear reports that he is gaining popularity. I even heard someone at work say they liked what he had to say to which I almost choked. I heard a report today that said his blatant bombasity is appealing to people who are angry with government and have felt threatened by it. In my opinion the man is an egomaniac who thinks he's somehow above the law and everyone else.

Olga! That girl knows how to relax!

I've been watching the flowers in my garden as well and keeping an eye out for hummingbirds. I really just want to get a bunch of wildflower seeds and spread them all around the garden and see what happens. I am sure, giving your surroundings, that you appreciate an English garden.

I love the flowers, but that picture of Olga just undoes me :)

I have a blogger friend who lives not far from that golf course. She was pretty up in arms about it.

Loving your flower pics. Love the name "fox and cubs" for that intricate "weed/flower" that you've managed to not mow down.

Trump. Humpf. I don't think he is serious. I think he's trying to mix things up on purpose. I used to hate him, but after watching his silly reality show "The Apprentice," I think he is more bluster than anything else. Deep down he might be a good person, but not a good president. Like I said, I think he's being ultra-obnoxious on purpose. Just a thought. (I don't agree with his politics or views that he has expressed lately, FYI)

I love your berries, the flowers and Olga...What a wonderful dog! As for Trump, if people here are stupid enough to elect him, then they deserve what they get. I think he is a buffoon. Happy anniversary.

I always love your Olga pictures. She's really flaked out there, isn't she?