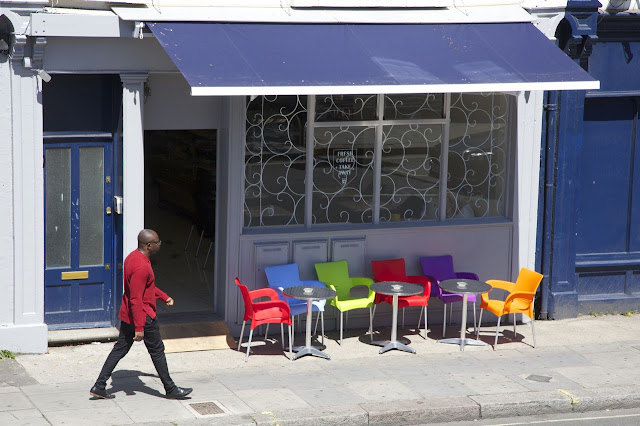 Yesterday was another daylong soaker. We were so unmotivated by the drizzly weather that we stayed inside reading and watching movies. I finished "The Whites," which I really liked -- but why Richard Price had to have both his name and his nom-de-plume on the cover is a mystery to me. Isn't the whole point of a nom-de-plume to keep the author's identity secret? So "Richard Price writing as Harry Brandt" really doesn't do the trick, and seems a tad pretentious.

Having said that -- excellent book, and recommended if you like noir crime novels.

We also had a friend over for brunch, and initially Dave intended to cook. But like Yeats's falcon in its ever-widening spiral, our ambitious plans lost their center. We considered going to a nearby French bistro, and then staying in entirely and ordering takeaway Lebanese -- which is what we did. Mere anarchy loosed upon our brunch.

The mimosas probably contributed to our lack of motivation! We still have a boatload of champagne from our garden party several weeks ago. I don't know how we're ever going to drink it all. There's a magnum in our smallish European refrigerator, and apparently once you've chilled your champagne you don't want to let it go to room temperature again -- and of course once you've opened it you have to drink it all. So we're stuck with that huge bottle hogging our fridge space, until we have enough people around to help us polish it off. At one point we couldn't even close the door easily. With only three of us, we did not open the magnum yesterday.

I was interviewed by Time Out London for a piece on Bleeding London -- and specifically about my accordions photo, which they are said to be reprinting. I don't think the article is out yet, at least not as far as I can tell. Also, the BBC News Magazine used some of my pictures of the now-demolished Carlton Tavern, which was exciting, even though the pictures themselves are pretty straightforward. (Interesting article, too.)

Today I've got to pack for Florida! Shorts and t-shirts, I'm thinking!