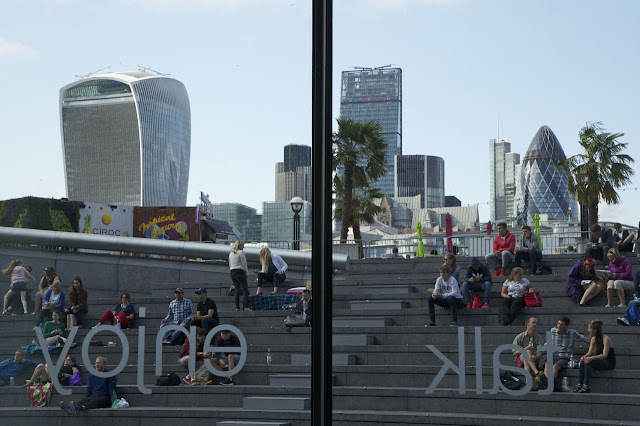 Dave was throwing Olga's Kong toy in the back garden the other day when it bounced over the fence into the next-door neighbor's yard. In the past, when this has happened, we've been able to reach over the fence with a weird three-pronged garden tool from our shed and retrieve it. (The only thing that three-pronged tool has been good for.)

But this time, the Kong was so far out in the neighbor's garden that we couldn't begin to reach it. So we knocked on her door, and of course she was away. We knocked again, hours later, and she was still away. Turns out she must be on vacation or something, because she hasn't been home in days.

Olga, meanwhile, acted as if we had stolen her puppies. She'd repeatedly stand at the fence, looking at us as if to say, "I know it's over there! Please go get it!" She moped around the house and went from room to room, as if willing the Kong -- her best friend, her only possession, her signal that fun is about to be had -- to appear.

The dog was such an emotional wreck that we decided to order another one and have it sent for next-day delivery. It arrived last night, and she eagerly snatched it out of my hand. Now she has her security blanket and all is once again right with the world. (We'll get her old one back, too, when the neighbor returns from Ibiza or Tenerife or wherever the heck she is.)

In other news, today is garbage day, and I am hoping against hope that the rubbish guys actually pick up the trash this week. Last week they left all our recycling behind. This morning I pulled all the bins out of the alley next to our house and lined them up on the curb so they couldn't miss them. I think one of the neighbors has thrown some stuff in the recycling that may not be recyclable, and I hope that's not why the garbage guys have avoided it -- because the neighbor will never fix it by herself and I, as the default garbage maintenance person for all three of our households, will wind up having to move everything to the garbage bin.

(Photo: The view from the cafe in City Hall, a few weeks ago. The palm trees are a temporary, summertime addition!)
Posted by Steve Reed at 6:09 AM

Sounds like you need to make sure and a backup Kong around AT ALL TIMES! :-)

Oh Olga! To have such sweet and simple needs!

I had a neighbor once who put all kinds of strange things in her recycle bin. Thank goodness it was hers alone but it tipped over one day so I saw things like Q-tips and band-aids on the ground.
I love Kevin's comment. A spare might be the answer.

catching up with your blog posts, So glad Olga now has a back up kong, you just never know ...like a toddler losing his binky, makes for some frustration and unhappiness. Dexter had loads of toys, SO many, but two of them were his security, Those are the two that I can not get rid of yet. I love your photo of the bent building and the pickle, with palms growing right there! Surreal. As are your shot of the chalk cliffs. Thanks for posting your adventures, as usual, you are most generous! Congratulations also, - hope your meal was worthy!