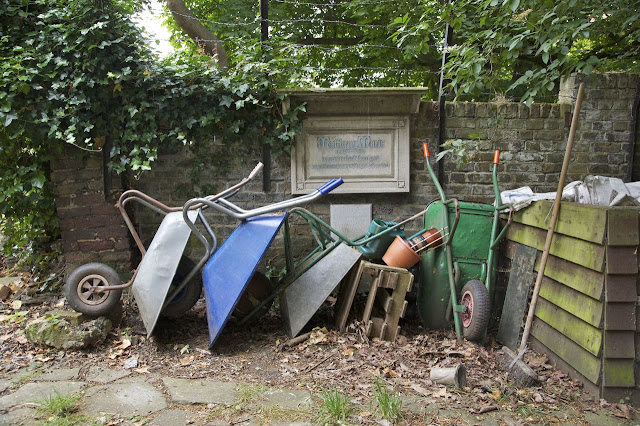 So what's been going on around here this week, you ask?

Well, we had some people come and clean our oven -- which sounds hopelessly bourgeois, I know, but that oven was a disaster. Dave, with all of his meat roasting, had left his mark. Many marks. He called a cleaning service that advertised a special on ovens, and they came in with a metal tub and some mysterious solvents, and after much furious scrubbing about an hour later they left and the oven was sparkling clean. And I am not complaining at all, even though the first time we fired it up afterwards, it set off the smoke alarm and scared Olga half to death.

I am working my way down a long mental list of things I've been meaning to do. Yesterday I got online and bought some clothes for the upcoming school year, for example. I reserved a rental car to drive in Florida on my upcoming trip. I bought some books on Amazon, including a copy of the novel "Bleeding London," because it's about time I read it. I made a dinner reservation for our anniversary.

And I have been working, working, working on my pictures to get them ready for judging by the RPS. This has turned into quite an arduous undertaking, even though there's not really that much to do, because I'm having to learn Photoshop as I go. (I've talked about learning Photoshop for years, but as is usually the case, I put it off until now, when I finally have a reason to sit down and do it.) I'm also chafing at having to make some of these changes at all, based on the judges' recommendations at that recent advisory day, but that's just my own ego and obstinacy, I suppose. I signed up for judging in October, so I have plenty of time, but I want to get it all done before school begins -- which really means before I leave for Florida on the 28th.

Plus I've got several more library books to read, and a few more day trips to take! I've got to keep practicing my French! And I'm running out of summer!

Dave was laughing at me last night, because I was talking about how much I have to do, and he said, "Yeah, but you don't really have to do any of that!" Which is true. I could turn in the library books unread. I could not take the day trips. But I've set these goals, you know?

(Photo: Wheelbarrows in the cemetery near Hampstead Parish Church.)
Posted by Steve Reed at 7:19 AM