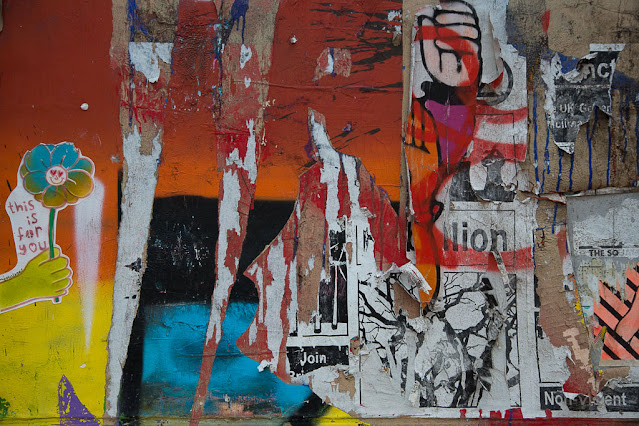 We are back home again, safe and sound. We got launched pretty early from our hotel yesterday and we did walk back to the Brighton train station, during a pause in the dreary autumnal rain. The station is less than a mile from the hotel so not that far or that hard.

The trip was uneventful except for a gaggle of loud, annoying kids jumping around in the train aisles. "Where are their parents?!" I asked Dave. I never would have been permitted to create so much chaos in a public place.

(Dave and I often joke about how we're becoming intolerant, grumpy old men like Statler & Waldorf on The Muppet Show.)

We spent the day organizing, unpacking and doing laundry. We were only away a few days so it's not like there was that much to do. In the afternoon I re-watched the movie "In Bruges," which I've been meaning to do since I went last spring (and it's scheduled to disappear from Netflix in two days). Despite the violence it's a good and darkly funny movie. Olga slept next to me the whole time, a dead weight, finally able to relax in a familiar environment.

I also caught up on my New Yorkers, including the one with the article about our neighbor Emma Thompson. Many people have mentioned it and I was glad to finally sit down and read it. It was surreal to read writer John Lahr (son of Bert, the Cowardly Lion) describing the street where we live. "Thompson...still lives on the West Hampstead street where she grew up," he wrote. "Her road in London is a sloping quarter mile of comfortable semi-detached houses, a football field away from the swankier dwellings across noisy Finchley Road. Among those currently residing there are Thompson's extended family...and a collection of A-team actors, most of whom she's worked with through the years -- Imelda Staunton, Jim Carter, Derek Jacobi, Jim Broadbent."

Lahr later refers to it as a "somnolent street" with "no distinguishing architectural features," but then he mentions the bathing beauty in the front yard of Thompson's mother, actress Phyllida Law. I've depicted the bathing beauty several times on this blog.

So, yes, that's our street -- the "Beverly Hills of West Hampstead," as some have jokingly called it. I was interested to read that Derek Jacobi also lives here, because I didn't know that, although I've seen him around a few times so I suspected it. I generally avoid using the names of our celebrity neighbors on the blog because I've wanted to respect their privacy, but since they're all mentioned in The New Yorker in this context I suppose it's OK. Lahr never specifically names the street, and neither will I, though if you've been reading a long time you may have figured it out by now, and if you know the area you can probably guess by his description.

You may be wondering how we can possibly afford to live in such a rarified environment, but Lahr isn't lying when he describes it as, essentially, a nondescript middle-class neighborhood. That's exactly what it is. (Plus, we rent here. Middle-class it may be, but I doubt we could afford to buy on this street, given London's insane housing market.)

Today, I have a medical appointment in the morning, and then it's back to work!

(Photo: A colorful wall in Brighton.)
Posted by Steve Reed at 7:26 AM

So your trip to Brighton was ok.
As you say about yourselves, so too we are becoming grumpy old intolerant men. Why is McDonalds full of noisy children?
So you didn't know the bathing beauty was in Thompson's mother's garden until you read the book?
I've never identified the famous Bearded Media Person in our building, although locals will guess. I never mentioned the then famous young radio star and his then partner, a famous model by name. But if just in the street, maybe I would.

I live with a grumpy old man. I’ve lately taken to calling him by his grandfather’s name. (But noisy, out-of-control people of any age do get on my nerves.) You should host a candlelight supper using your Royal Doulton with the hand-painted periwinkles for the famous neighbors.

I'd have thrown the kids from the train because I am not so much grumpy as murderous.

I never knew you lived around the rich and famous. What an interesting neighborhood. Now I wonder how did you find your apartment and if the Russians are emigre novelists.

I wonder if Emma Thompson and Derek Jacobi mention the names of THEIR celebrity neighbours on their blogs. Derek Jacobi..."I saw him again today Steve The Librarian I mean. He was just strolling along nonchalantly with his grinning hound. The fellow is so cool and he always gets my heart racing..." Emma Thompson "The two American guys who work at The American School had another barbecue at the weekend with the usual shouting and loud rap music blasting out of their horn speakers with a cloud of burnt sausage smoke wafting over the fences. It's just not on!"

That's the issue of the New Yorker I have ready to read now but I didn't get to that article yet. You and Dave are living near quite a few celebrities! Soon it will be Christmas break for your school, right? How the year has flown by.

When I read that article I felt the tingle of a few degrees of separation!

I've ALWAYS been intolerant of rowdy kids. Or rowdy anyone, really. Just simmer down people! I'm sure I was a joy as a grumpy old child. Ha!

Here you and Dave are, residing amongst the stars.

You live in quite the neighborhood there. Surrounded by the rich and famous... and the Russians!

I'm going to read that article. Thanks for the link. There are a few more well know people on your street than I thought. I've been watching "The Crown" with Imelda Staunton in the "lead" role. I remember seeing that bathing beauty.

I love what Yorkshire Pudding wrote!

So you don't live among the hoi polloi but rather amongst the stars. You've been holding out on us. I had no idea that bathing beauty was related to such a famous woman.

It's always good to be back home. However, we have to make ourselves get out or we get into a comfortable routine and don't do anything.

Yorkshire Pudding's comment cannot be beat. I didn't realize that you lived near such famous people. When my Older daughter and her husband were in West Hollywood, they lived very near Chris O'Dowd and sometimes saw him walking his dog. However, they also lived across the street from a trans homeless encampment. Such is LA.

Grumpy old men perhaps but I think lack of parenting is a bigger reason.

I too live on a street with somewhat famous people, including a well known romance novelist. But I knew her as my neighbor before her occupation so I still think of her in that context.

I'm more interested to know that Derek Jacobi is your neighbor than Emma Thompson. The Emperor Claudius! (or Brother Cadfael)

Yes, I'm at that point in life where it's obvious I've become an old fuddy-duddy in many ways. 🙄

How funny that the bathing beauty is the creation of Emma's mother. And Kelly connected the dots between Jacobi and Brother Cadfael. I would not achieved it on my own. I love the idea that they might gossip about you and Dave from time to time! Too funny.

I read that New Yorker article and loved it. It even sent me down a rabbit hole of more searches. I even got to see the wedding photos of Tindy Agaba. And, now I want to see that new musical about Nanny McPhee when it starts.

That's almost like living among royalty. Or one of those streets and gated communities in Hollywood where the tourist buses go filled with sightseers with cameras.

Andrew: Oh, I knew the bathing beauty belonged to Emma's mom. I just never said it.

Bob: Well, grumpiness can LEAD to murderousness, so I get it.

Boud: Sadly, I think the Russians (or Mr. Russia, anyway) work in the financial industry. They're far too brutally practical to be artists.

YP: I doubt very much if they say much about us, because we're boring, but Dave says Emma once told him in the pharmacy that Olga is a "fabulous animal."

Ellen D: I can't believe it's almost December! We have a few more weeks until break. I think we're done on the 16th.

Ms Moon: Like the British version of that Kevin Bacon game!

Bug: And working in a library makes it worse, believe me. You just want to yell at everybody. LOL!

Ellen: It's very surreal and certainly not something I ever expected.

Robin: Ah, yes, the Russians! Maybe they're rich and famous back in Russia?

Sharon: I had my doubts about Imelda as the Queen but I think she's doing a really good job.

Pixie: Well, there's hoi polloi here too. (Like us.)

Margaret: Kind of a similar situation -- the famous and not-so-famous, side-by-side!

Ed: Oh, I'm intrigued! (Not that I read romances.)

Kelly: Yeah, I saw him on the sidewalk one day and recognized him immediately!

Padre: Dogs get SO HEAVY when they're sleeping!

Debby: Well, as I told YP, I doubt that they talk about us but I think they've taken notice of Olga.

Sharon: It was a very good article and I can see how it would lead to more searches, though I didn't get as far as Tindy's wedding photos. :)

River: I suppose if London had a tour of the movie stars' homes, our street would definitely be on it. (And everyone would say, "What's the big deal?")

I love that you are living near a big handful of my favorite actors. Say "hello" for me, should you and Olga encounter. (I know... I get it! Just joking -- sort of!) That's something I love about the Brit actors. They live like real people, not in gated worlds. It's refreshing.